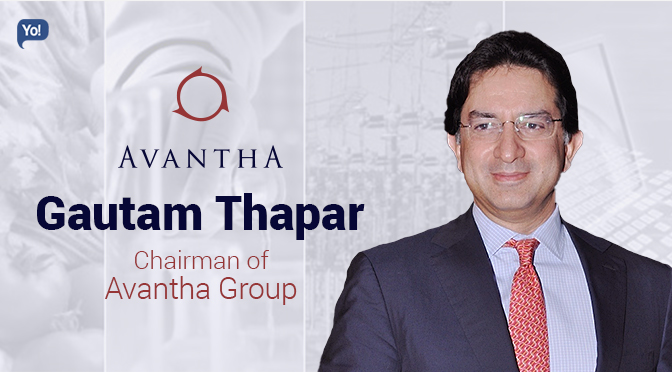 Born on the 7th of December 1960; Gautam Thapar – the Indian businessman is the Founder & Chairman of the Avantha Group which till earlier was a part of the Billion-Dollar Thapar Group!

Gautam officially founded the ‘Avantha Group’ in the year 2007 with a collection of the following companies: –

In the present world order; Gautam is widely known for his strong and eminent leadership skills, which has also driven the group to upscale to different levels of success! Along with that; Gautam has also taken an active part in the social responsibilities which spreads across three sectors: education, leadership development and sports.

A style icon for many, Gautam is often recognized by his white cotton shirt with cufflinks that are inscribed with the initials of his name – ‘GT’. Additionally, as you enter his office, you will come across five clocks showing the time of five global cities such as London, Brussels, Mumbai and Delhi along with a reverse clock named as “patal.”

Personally, the avid reader that he is; Gautam leads a simple life with his wife Stephanie and four children in their lavish Delhi Residence!

Gautam belongs to the well-respected & immensely wealthy family – the Thapar family and is the third generation in the business family!

One winter morning in their hometown of Kolkata in 1960; Karam Chand Thapar a.k.a. KCT (founder of Thapar Group) was sipping tea along with his wife Mohini and a sage – Swami Satyanand (head of the Ram Ashram Network).

KCT asked his maid to bring the newborn baby in the family, to seek the blessings of the sage. Swami took him in his lap, gave his blessings and told KCT that the child was destined to carry the legacy of the Thapar Group to glorious heights and would also compensate for the mediocre performance and detachment of B M Thapar. This newborn child was none other than Gautam Thapar.

Years passed & Gautam grew up, completed his schooling from The Doon School and went on to further pursue Chemical Engineering at the Pratt Institute of United States.

After he completed his studies; he tried searching for a job, but to his luck, even after a lot of efforts he couldn’t find a suitable job and at the same time his US visa was also running out as well.

That is when his uncle Lalit Mohan Thapar, in 1980, saw his struggle and asked him to come back to the family business. Now what was interesting here to know was that, he was not on talking terms with his uncle because his father had messed up relationships with the rest of the family and during the same time his uncle was training & grooming Vikram Thapar (his nephew) for the business!

But anyways taking his uncle’s advice, Gautam returned to India and joined the family business!

The Thapar Group has existed since 1919!

Soon after he came back, Gautam was offered to take charge of the falling Andhra Pradesh Rayons (APR) which he hesitatingly agreed. He began as a mere factory assistant in a manufacturing unit of the former Thapar Group.

At the same time, he was also asked to nurture BILT’s new export oriented businesses too. And after Gautam reviewed the business, he found that the problem was in the way things were being managed in this part of the group. Impressed with Gautam’s way of working; Lalit Mohan also gave him the responsibility to fix BILT’s chemical division, which was going through losses due to labour, water and power issues.

To everyone’s surprise; Gautam showed profits within just a year, by killing the expansion plans of the company, along with selling off a few assets and lastly & most importantly dealing firmly with the labour.

Gautam evidently had gained Lalit Mohan’s attention, and was also rising rapidly through the ranks!

During this phase, he also learnt some priceless virtues like: how to remain humble and grounded after attaining success, that a company cannot be run by simply making regular visits to the factory site and that you also need to know the ground realties, while preparing for an ambitious uplift; from his senior colleagues in the Group.

Later in 1999; to avoid a rift, the family’s assets were divided into four: –

Other than that; as a whole, the Thapar Group which was India’s second largest producer of coal prior to coal nationalization, also had interests in sugar, paper, chemicals, textiles, banking, insurance, and engineering products and services. The Thapar Group has gone on to establish some of India’s most respected institutions, like Oriental Bank of Commerce, Oriental Insurance, etc. 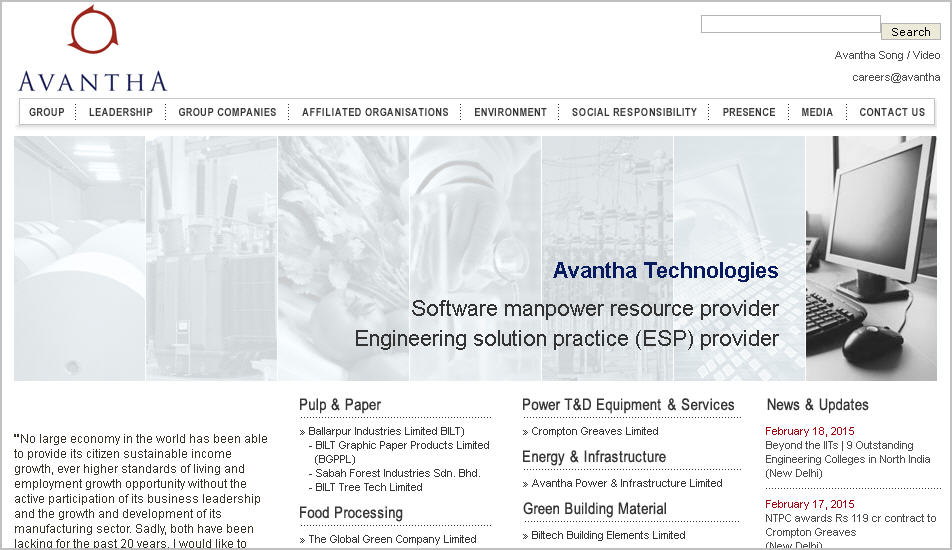 Since the division of the group; Gautam found a new sense of freedom and freshly started towards the growth of his share. And mind you the business grew handsomely!

By now, apart from handling his part of the business; he was also handling his uncle – L M Thapar’s business as well. Additionally, he also bought out Karan’s holding in Crompton Greaves in 2005-06 too!

In 2007; his uncle passed away and with that Gautam became the official and rightful owner of his part of the business as well. He was in the position of running the largest and most successful parts of the business.

Now obviously, he had a lot on his plate to take care and frankly, managing all of it separately, was getting difficult with every passing day. It was the right time to move away from the baggage of the past and create a new identity for themselves; basically, consolidating all his ownership and inheritance under one banner.

Having said that, a new identity – ‘Avantha Group’ was launched worldwide on the 15th of November 2007!

TRIVIA: – In November 2011, Gautam Thapar had gifted the King’s College London ‘£3.5 million’, to establish the Avantha Chair accompanying the Directorship of the King’s India Institute.

Initially, everything went really well; but since the last few years; Gautam’s net worth had gone down by nearly half a billion. The main businesses of Avantha Group, which once ruled the market, were struggling to survive. His shares at Crompton Greaves had also fallen by 16% due to the rising costs, Chinese competition, and weak European markets.

He tried his best to save it from falling without taking any harsh decisions but when he saw that things weren’t getting any better, he decided to take a firm stand!

In an attempt to save the falling Avantha Group, Gautam put Crompton Greaves up for sale.

But to his hard luck; he wasn’t able to find the right kind of buyer and on the other hand; the pressure seemed to be mounting up on Avantha Group and Gautam himself!

Now since there was no better resolution that seemed to be coming up, therefore, in November 2014; with a heavy heart, he decided to sell the 600MW ‘Korba West Power Plant’ in Chhattisgarh to Adani Group for a whooping Rs. 4200 Cr.

With that sale being completed in March 2015; recently, Gautam also found a buyer for Crompton too. Hence, without wasting any time; he sold 35% stake in the consumer products division of Crompton Greaves for Rs. 2,000 Cr to private equity firms – ‘Advent International and Temasek’.

And since then and as of date, the Avantha Group collectively and successfully operates in over 90 countries with more than 25,000 employees worldwide. Over the period of years, the group has also made some enormous acquisitions, some these include: –

As the sage had earlier wisely predicted; Gautam Thapar has always been the “chosen” avatar, who successfully has revived the Group back to its former glory, of being amongst the top five industrial houses of the country. And proving him right; within a span of 13 years or from the year 2000 from a mere Rs 200 Cr, he has uplifted the group to more than Rs. 20,000 Cr.