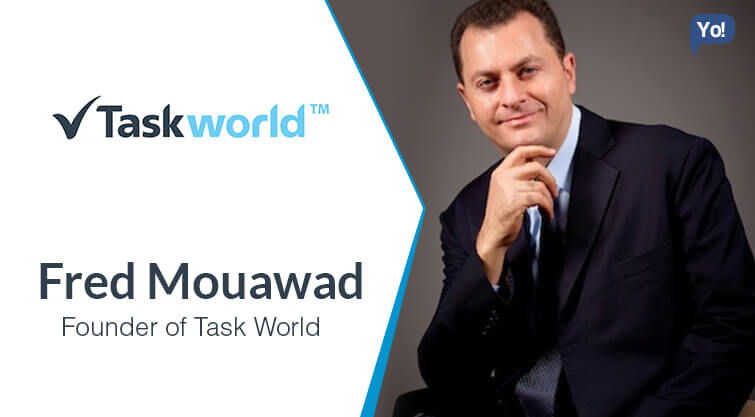 Born on the 16th of February 1969 and based in Bangkok, Fred Mouawad is a French-Lebanese billionaire who is the Founder and CEO of Taskworld. As of 2013, he personally holds a net worth of $1.1 Bn.

Fred belongs to the fourth generation of the Mouawad family, which owns and runs the 126-year old Mouawad jewellery and watch business. He is the oldest son and heir to the world-renowned ‘Mouawad Diamond’ jewellery company that was founded in 1890.

He along with his brothers Alain and Pascal Mouawad having been guardians of the business since the time their father retired in 2010. 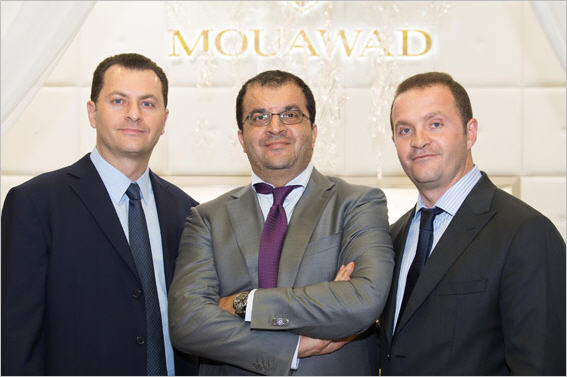 Fred is also the CEO of seven other companies which he had founded under the banner of Synergia One Group.

He also managed to divert a lot of attention towards him when he created Seven Diamond-studded Bras for Victoria Secrets, that was priced somewhere between $7 million to $12 million. These bras also managed to grab four Guinness World Records as the most expensive pieces of lingerie ever made.

Fred grew up in Geneva in Switzerland where he attended boarding school at College du Leman. Later, he completed his Bachelor of Science in Business Administration from the Pepperdine University, and also acted as a ‘Teacher’s Assistant’ for the Business Policy & Strategy course, for a brief period.

Post that, he went on to complete his graduation in Gemology from the Gemological Institute of America, and also co-authored a few articles in the same field.

Other than that, Fred is an alumnus of the Harvard Business School (MBA), and has also pursued graduation from the Stanford Graduate School of Business in Stanford Executive Program (SEP).

Lastly, he holds a Lean Six Sigma Green Belt, is ISO 9001 trained, and is also a member of the Young Presidents’ Organization (YPO).

The Life Before Taskworld?

Fred was born in Lebanon and always assumed that he would get into the family business straight after school would get done. That was it. He never thought that he would be doing something else.

But obviously that plan didn’t work out. Fred wanted to stay independent. But his father wasn’t planning retire anytime soon. Hence rather than spending decades in his dad’s shadows, Fred left the family business and decided to launch his own set of companies.

But then again, not everything went as planned. Over the period of time, not all of these companies succeed as planned, but what was great was that, one project always lead to another.

Fred started his first business in 1996. It was called ‘Gemkey’! Gemkey was an online portal for Gem & Jewellery industry. He had launched this B2B Internet diamond exchange with hopes to get retailers to conduct their business online. But as fate would it, the business died in 2000, due to the Internet Bubble Burst.

But to his surprise, the magazine – ‘INSTORE’, which was supposed to be a marketing vehicle for the B2B exchange, survived and flourished. Eventually, Instore developed into a magazine for jewellery store owners and also became a part of its parent company ‘SmartWork Media’, which also introduced two other magazines called – ‘INDESIGN’ (for retailers of fine jewellery brands), ‘SPA+’ (for spa owners), and ‘INVISION’ (for American eye care professionals).

Over the period of time, Fred also initiated quite a few businesses which today have restructured into an Umbrella company called ‘Synergia One Group of Companies’ that runs the whole show.

Apart from SmartWork Media and their family business Mouawad Diamonds, below is the list of companies operated by the group: -

What is Taskworld – The Business Model and Strategies?

To begin with – Taskworld is a cloud-based platform that is offered through the SaaS (software as a service) medium, to facilitate delegation and evidence-based evaluations within teams. It is available as a cloud service and as mobile app as well.

Taskworld in other words is a performance driven platform that helps to increase the productivity of the employee, their engagement, as well as accountability. It helps the company and its employees to measure and track performance and analytics, and also includes evaluation and then feedback by the concerned team after the completion of the task or project. 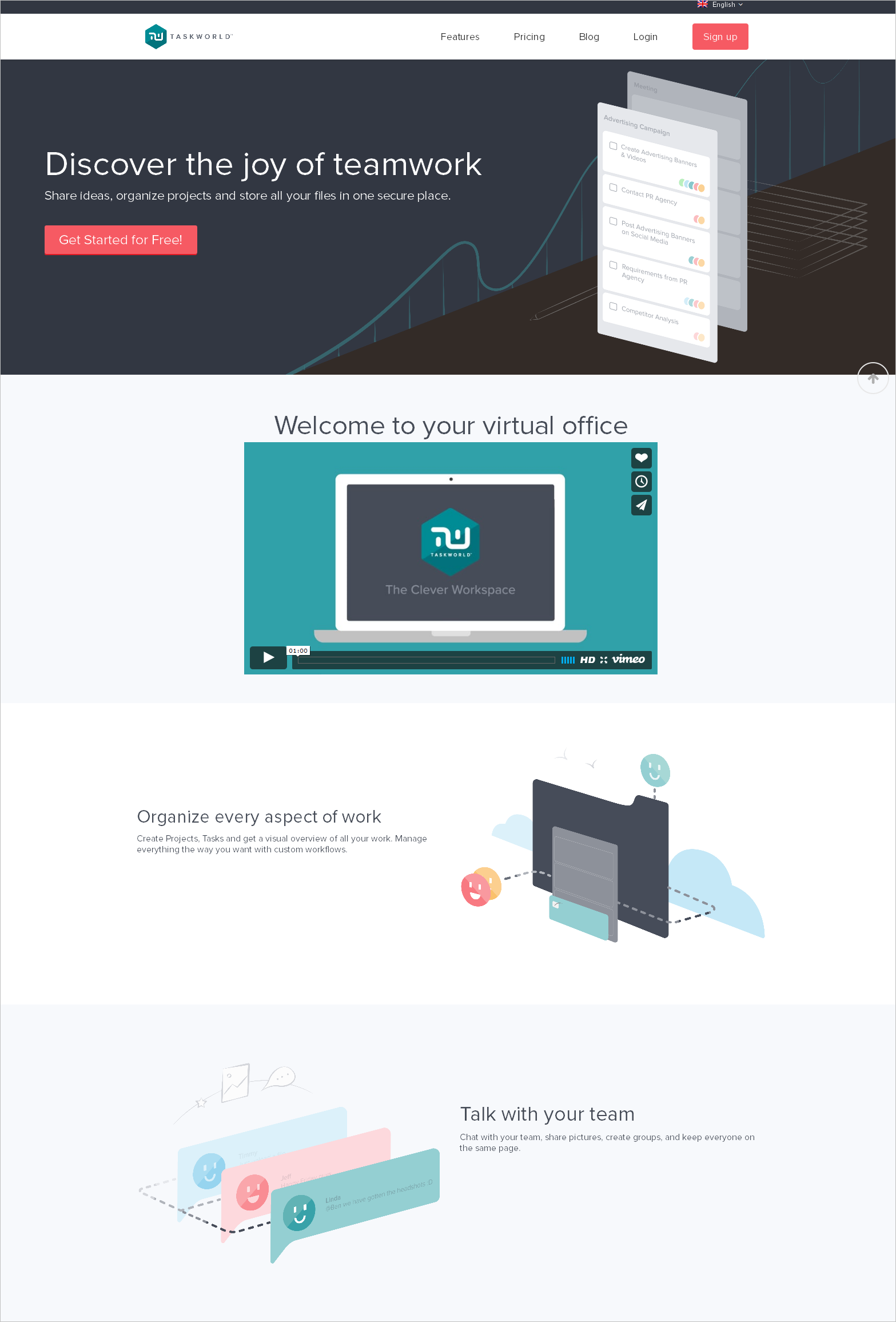 The product along with all its features is currently available for a free trial service for 30 days, post which there is a charge of $11 per user / workspace / month.

The better understand the platform, divide it into two halves. The first half is a more-or-less conventional team task management solution; whereas, the second half is the end which comes after the tasks are completed.

Take for example, someone assigns you a task and you complete it. Post that, the assigner is alerted about the same, and is also presented with the options to accept the task as completed, or reject it. If they accept it, then the task would be closed and they would be presented with options to rate the work, and send you a message about the task, including optional emoticon, but if they reject the task, then the task would be reopened and you would be alerted about the action that you need to take.

Let’s give you gist about what all can you do on Taskworld: -

Create projects – The platform offers tools to simplify complex projects with a visual overview of what’s happening, and to track the progress in real-time, etc…

Manage tasks – One can create and assign tasks, set due dates, search for tasks easily with coloured labels or tags, use task lists to organize a team, add comments, view files on the phone, etc…

Evaluation and Reports – Evaluate the work, give you ratings depending on the quality, give your feedback, etc… The ‘Reports’ section provides a report of information for searches like ‘On-time Completion’, ‘Star Rating’ and other metrics. ‘Project Metrics’ provides report about the contribution the colleagues have made to projects. These reports are available for both – the user in the ‘Dashboard’ section, and for their colleagues in the ‘Performance Reports’ section.

Chat with teammates – Talk to your team, share files, pictures, etc and communicate in real-time. Also, one can create public channels to reach out to everyone in the workspace, or can also create a private group.

Security – Taskworld uses SSL technology for security, and with the help of server authentication and data encryption it helps to protect all the data across all devices.

To sum it up – In this crowded market where we can find literally everything from To-Do list type apps to sophisticated enterprise solutions, Taskworld attempts to differentiate themselves by offering performance reports that helps the companies and the teams within them to understand how well they are doing, exactly where do they stand can and where are the further improvements required.

Their clientele comprises people from all walks of the professional world including – individuals, small to midsize organization, and large enterprises.

The Story of Taskworld – And its Growth

Taskworld is a seven-year brainchild of Fred!

Their story goes back to 2005. Fred was involved into various projects spread across different companies with distributed teams across countries at any given time. Hence, he was forced to use a variety of different tools ranging from Excel to notebooks to note down the key tasks he had to keep a track of. It was nearly impossible to provide timely feedback, let alone real-time feedback to all the members of the organization with accurate and evidence-based evaluations.

He was finding it extremely difficult to manage all his business ventures that were spread across several industries, and desperately needed some help in managing the activities of hundreds of employees.

Clearly, the effort and energy required to manually follow-up was becoming a real pain. He realized that not only was he spending at least a third of his time following up on tasks, but was also losing out on a lot of productivity. He found himself doing less of strategic thinking, and more of execution, which was wrong.

Frustrated with existing tools, Fred decided to develop an internal project management application that would have numerous significant new features that were not available in any other similar product.

In 2006, Fred’s custom-built IT team built the initial version of Taskworld, an application that noted all the tasks between departments and also tracked the percentage of work completed on-time. Better known as – ‘Task Management System’! 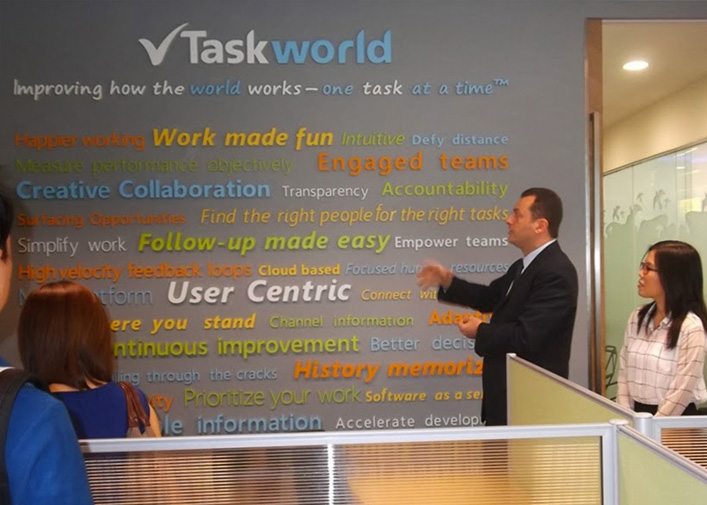 And to quote the founder – “The results were immediate”!

After just six months of using the internal application, productivity of his employees and the company as a whole, increased greatly. The team using the platform across international offices loved the experience, and thus improved the execution significantly as well.

He conveniently used the software for the next 6-7 years and enjoyed its luxuries. Now while at it, Fred also realized that if he was finding it so helpful and useful, obviously, other managers would also highly benefit from a similar system. That is when he thought of building a site that was open to the public.

In 2012 cloud-based computing arrived in the market, and around the same time mobile technology rose widely too. Fred saw this as the perfect opportunity to rebuild his internal collaboration platform, into a platform that could be accessed by the whole world.

In the same year, he happened to attend an Executive Program at the Stanford Graduate School of Business. He presented the prototype to a few classmates and key contacts in Silicon Valley, with an aim to gain some feedback. He received some really positive responses, which led him to increase resources to build the platform.

Having said that; the successful internal implementation led to launch the ‘My Taskworld’ website in November 2013! It later evolved into ‘Taskworld’. The app was launched for both android and iOS platforms.

Over the period of time, the company has managed to receive some really positive media coverage and also managed to make some tough competitors as well. These include – Asana, Basecamp Classic, eXo Platform (Open Source), Kitovu, Huddle, Trello and Wrike.

Today, they have grown to become a 50 member company and also aim to expand further as well. Now even though, they have been very shy and guarded in disclosing their recent developments, investors, or for that matter their revenues, but it is for certain that, they are huge developments happening behind the scenes.