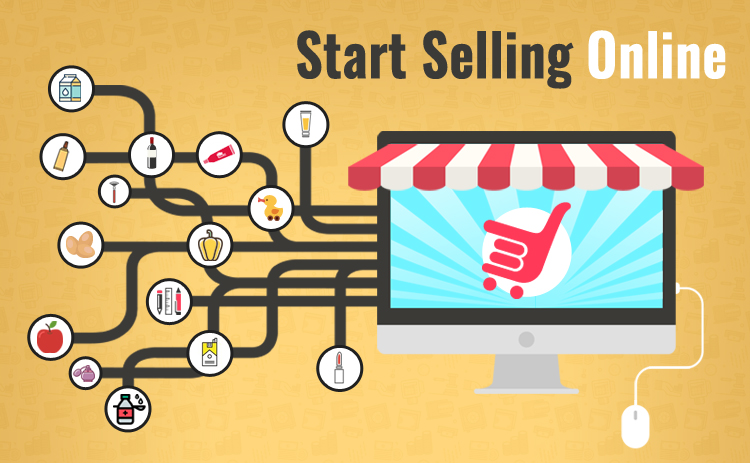 Some of the Key drivers that are leading to this phenomenal growth of the Indian eCommerce include: -

But these are just the stats about the eCommerce market. Let’s give you more detailed reasons why it is high time an FMCG brand joined the eCommerce bandwagon!

During the initial days, FMCG players were not really keen on launching their own portals to sell the products on the internet and preferred to choose the safer route and collaborated with the eCommerce websites such as Snapdeal, Flipkart and Amazon India, to keep up with the new-age retailing and sell on the internet.

But over the period of time, and with the changing times; the bigger players saw the potential of the eCommerce market and decided to jump on the bandwagon. The huge potential of online shopping caught the attention of top FMCG companies such as Dabur, Marico, Bisleri and ITC, which started pushing their products on the internet.

Godrej not only tied up with generalised eCommerce marketplaces like Snapdeal, but also began preparations to launch their own individual portals as well. Additionally, they are in preparations to acquire an E-Grocery site, and are also anticipating 5-8% of FMCG sales coming from online channels.

On the other hand, Dabur India is not only running four portals of their own, but is also working with multiple partners like Amazon India and Flipkart across the categories to sell our products online.

UL (Unilever India) has already switched its direct selling model to an online ordering platform, while Marico India is selling their products through Flipkart and Amazon, and is also building its own eCommerce capabilities though its company’s website as well.

And, ITC already sells their food products their own website shopping.kitchensofindia.com, and also has listed its products on various other eCommerce marketplaces, too.

But what came as a surprise and shock to most of the FMCG players and the consumers, is the entry of the recently risen Patanjali, which had transformed into a ₹5000 crores entity in such a short time. They have also set foot in the eCommerce arena by way of tie-ups with marketplaces, along with their own eCommerce portal, giving other players a nightmare.

Why must offline FMCG and Consumer Durable Brands come online?

Aside from the obvious factors that we mentioned above – India has seen a phenomenal rise in the jump in the number of internet users, which is seen to be growing at an unprecedented rate, and is adding around 6 Million new entrants every month.

According to a research conducted by TMW and Marketing Sciences amongst 2,000 people across different age groups; the young consumers in India are the most ‘rational’ ones and more likely to spend more time, thus increasing the potential of purchases. To add to that, shoppers aged between the age of 18 and 24 are 174 % more likely to use recommendations on the Social Media than shoppers aged beyond the age of 25.

Customers are attracted to online shopping not only because of high levels of convenience, but also because of broader options, competitive pricing, and better access to information. And business organizations use the online medium to sell not only because the costs are lower comparatively, but also because it offers access to a global market, increases customer value, and builds sustainable capabilities.

eCommerce gives you the leverage to establish a market presence, or to boost your current market position by offering a cheaper and more competent distribution chain, to a much wider audience.

A recent joint report called “Re-Imagining FMCG in India”, submitted by CII and Boston Consulting Group (BCG), noted that –– growth in disposable income, increased urbanisation, and the increase in the number of nuclear households would be the key reasons for the growth of the Indian branded FMCG sector.

Some more key pointers of that report included: -

The tier 2-4 towns and rural regions would play a larger role in the forming of this growth, as their contribution will be an important source of demand for the sector. In the near future – the smaller towns and cities across India are expected to contribute the most, in shaping the future demand for the FMCG sector, while eCommerce companies will account for a much larger share of the sales of these companies.

Households with more than Rs.10 lakh annual income would account for 50% of the spending in the category, causing the “Premiumization” across categories; thus, transitioning them from unbranded to branded.

The decisions of more that 150 Million consumers would be digitally influenced in the FMCG sector by 2020, who’s spending would then increase to more than $45 billion (₹298,323 crores) on FMCG categories.

And although some of large eCommerce companies in India including Flipkart, Snapdeal, Amazon India, etc., have managed to gain the first-mover advantage, but that shouldn’t mean that others have lost the opportunity.

In fact, these companies have helped the others in educating the consumer of such services, and since, the large offline FMCG players have their brand value and loyal consumer base, they can easily sweep in to the market now.

Believe it or not – the future actually belongs to those retailers and brands that hold the potential to see the larger picture and who are able to successfully use online and offline, to their benefits by developing a defined multi-channel strategy.

What you need to know, before you go online?

Online is quicker and more convenient, it gives shoppers more control over their budgets and means there is a much wider range of products available. While fun might seem like an exception, with the other motivations seeming to focus on meeting more practical needs, there is more potential to meet this need using the online channel than in physical stores.

By profiling shoppers further to develop a better understanding of these motivations – as well as the pressures, aspirations and functional needs that lie behind them – retailers and brands have the potential to improve their online offer, capture new customers and ultimately grow their revenue

The eCommerce channel clearly presents significant growth opportunities for retailers and brands, but how can these be exploited, completely depends on the execution!

For instance – the profile of early online adopters i.e. young, wealthy, urban/suburban families with children, is consistent across all countries; however, what motivates shoppers to go online differs depending on the local environment and other socio-economic factors.

Generically speaking, there are four types of shopper motivations that drives FMCG consumers: Cost, Time, Availability and Fun. These can easily be attained by using some intelligent Digital and Direct to Consumer Marketing Strategies.

And understanding these motivations is the trick to driving sales!

Other than that, simple and ready-to-use eCommerce portals help you to start your own online shop with ease. They are usually installed on the company’s web-server and the existing supply chain can easily be integrated so that ordering, payment, delivery, accounting and warehousing can be automated to a large extent as well.

One of the best ones currently available in the market includes YoKart that not only helps you to launch your own products, but also offers you the option to have a Multivendor Marketplace as well!

Some of its features includes a Responsive Design Layout for all eCommerce websites, State-of-the-art Security system, Scalable Scripts, Handcrafted Structure, Economical and Competitive Packages, Admin Dashboards for both you and your Suppliers, Settings Control Panel, etc…