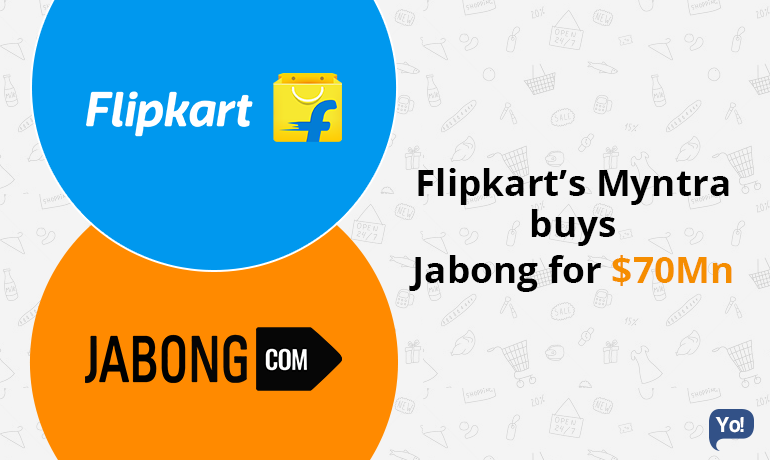 The negotiations were led by Nishant Verman – Head of Corporate Development at Flipkart, along with the founders of Flipkart Sachin and Binny Bansal.

As per Myntra’s CEO, Ananth Narayanan – Myntra and Jabong would be run as separate entities, and he would assume the charge as CEO of Jabong, as well.

The sale process was competitive with multiple parties participating until the end, and Flipkart was the chosen suitor as its proposal delivered best value for all stakeholders.

The deal was a roller coaster, and there were several offline and online parties interested in it. And after months of back-and-forth talks between multiple interested Indian parties and Global Fashion Group & Kinnevik (the owners of Jabong), the deal finally saw the daylight.

According to people involved in the deal, Myntra eventually paid more $50 million than what Snapdeal and Future Group were willing to pay. But still, experts believe that this is a steal for Flipkart!

There are a lot of cost synergies at the back-end between the two companies and Flipkart could derive a lot of value from the purchase.

Although the financial details of the deal were not disclosed; but the combination of Myntra (that was acquired by Flipkart in 2014 for ₹ 2000 crores) and Jabong, will create a hell of a combination with a base of 15 million monthly active users, and will further strengthen Flipkart’s position as the undisputed leader in Fashion and Lifestyle segment in India.

Together, Flipkart’s Myntra along with Jabong will now account for a whopping 60-70% market share of the online fashion business, leaving very little for the rest.

With Jabong in their kitty, Flipkart has not only one-up’ed Snapdeal and Amazon in the race in the high-margin online fashion segment but has also created a tremendous amount of pressure on the smaller online fashion retailers and Internet-only brands. Such a deal would also help them in reducing the dependability on discounts, as well.

With this transaction in place – Myntra has managed to pip Snapdeal and the Future Group to acquire Jabong in an all-cash deal that will create India’s largest online fashion destination.

What led to the sale of Jabong?

To begin with – Fashion and lifestyle (that is pegged at $2 Bn and is estimated to grow to $20 Bn by 2020) is the single-largest online category!

With more than 430 fashion and lifestyle start-ups founded in just the last one year, this sector is going to be one of the biggest drivers of the eCommerce growth in India.

Start-ups such as Tiger Global Management-backed LimeRoad, Sequoia Capital-backed Voonik and Koovs among others; till before were being perceived to be a threat to Myntra and Jabong.

In this category, the niche and specialised players continued to grow, making it difficult for the others.

Talking about Jabong – a company that was founded in 2012 had got merged with four other online fashion retailers in Latin America, Russia, the Middle East, South-east Asia and Australia to create a Global Fashion Group (GFG), by their main investor – Rocket Internet in 2014.

By the end of FY2015, Jabong’s revenues stood at €122.1 Million, with a negative EBITDA (earnings before interest, taxes, depreciation and amortisation) of ₹415 crores.

To curb their losses further, Jabong even tried shutting its London design centre, which created western clothes that the platform was increasingly associated with.

But to their hard luck – nothing seemed to be working in their favour! To worsen the situation more, Arun Chandra Mohan and Praveen Sinha (Cofounders of Jabong) were also let go from the company around late last year, as well.

They even tried raising some more funds from their existing investors, even at a lower valuation of €1 Billion (from earlier €3.1 Billion), but even though, the company had somewhat managed to reduce their losses by reducing discounts, both Kinnevik and Rocket Internet seemed unwilling to infuse fresh capital, post this.

The company had unfortunately lost its sheen!

Hence, as a whole – due to gradual evacuation of all the top management along with cofounders of Jabong, several bad decisions and funding crunch in the market, led to the fall of Jabong! And it was put on display for a sell-off.

In fact, Snapdeal, Amazon and PayTM had been in the race to acquire Jabong at different points in time. Amazon had been in discussions with Global Fashion Group (GFG), to acquire Jabong more than a year ago, but the deal didn’t materialize due to over valuation (which was said to be a whooping $1 Billion).

Moreover, since it was put on display, Jabong was formally in discussions with companies including Future Group, Snapdeal and Aditya Birla-owned Abof among several others, for a potential buyout.

PayTM and Snapdeal had come the closest to buying Jabong, but before they could do that, Flipkart snapped it up!

Turns out – Snapdeal had dropped out of the race proactively before anything closed! According to them, Jabong did not address the issues that had come up during due diligence, which included ––– Jabong’s owners refusing to indemnify them against potential damages arising out of a ‘financial impropriety’, and that, Jabong was also understating their monthly burn rate for driving sales and was also in violation of latest FDI guidelines by selling self-owned goods.

But nevertheless, many experts and analysts that were close to the deal still believe that, this is a good exit for Jabong and Flipkart.

What’s in it for Flipkart?

To begin with – Jabong is India’s major fashion multi-brand e-store and accounts for 1500 on-trend international high-street brands, sports labels, Indian ethnic and designer labels and over 150000 styles from over a thousand sellers.

Some of global brands that will be exclusive to both the platforms include Dorothy Perkins, Topshop, Tom Tailor, G Raw Star, Bugatti Shoes, The North Face, Forever 21, Swarovski, Timberland and Lacoste.

With deep pocketed and powerful players including Amazon and upcoming challengers such as China’s Alibaba and Japan’s Rakuten, entering the Indian ruthless eCommerce market — Jabong’s acquisition will definitely play a crucial for Flipkart!

The acquisition comes at a time, when rival Amazon is spending Billions of Dollars to become the market leader of the Indian market, and would not only further penetrate the red-hot Fashion category but will also help in keeping the likes of Amazon at bay.

Other than that, one of the biggest advantages of this acquisition would be that it would allow both the companies to quickly reduce the burn, on discounts as well.

On the operations end, this will not only give the trio (Flipkart, Myntra and Jabong) a lot of bargaining power with the sellers, but will also help them in greatly reducing their overall marketing costs, as well.

To sum it up – this is the perfect example of a company acquiring another, for synergies in areas like access to customer base, increase of territorial reach, new set of products/brands, new logistics networks and / or a great team!

Why have the consolidations become aggressive?

Yes, consolidations are happening, but more than that rationalization is happening. Like it or not – consolidation is an inevitable and natural part of any evolving industry!

And since the past few years, the consumer-focused internet space has also reached this phase of acquisitions, mergers, and shutdowns, too.

While these consolidations send out messages that the sector is maturing, but there are several underlying reasons to a merger, acquisition or shutdown. Most of acquisitions have largely been because of the inability of companies to raise additional capital and weed out competition, or because they have been forced by common investors.

Take for instance the acquisition of Letsbuy by Flipkart – Tiger Global was a common investor in both the companies and had forced the former to merge with the latter. Similar was the case with Ola and TaxiForSure (TFS), who had SoftBank had as the common investor, but SoftBank didn’t want TFS to lock lips with hyper-funded Uber. But in the cases of FabFurnish and CommonFloor, they took place due to an acute funding and cash crunch.

To put things in perspective – sectors like power and cement were hot investment propositions between 2007 and 2012; and the last two years saw a sudden swing of consolidations, where the assets in the industry shifted from weaker to stronger companies. What enforced these consolidations? Banks! These consolidations were directed by the banks that had lent to these sectors, and which were consequently looking at huge NPAs (Non-Performing Assets).

Evidently, the eCommerce business and market is reaching its maturity of players, and the next 6-9 months, will be the deciding months to narrow down on the key contenders.

According to a study conducted by Red Seer Consulting (The Indian e-tailing Leadership Index) that surveyed more than 3000 customers across the country; placed Flipkart at #1 position overall, which was followed by Amazon, then Snapdeal, PayTM and ShopClues!

Having said that – the rest of the players in the industry are definitely going to face valuation and investment pressure! All the companies that have been taking it lightly will now have to divert their focus to Unit Economics (Revenues earned from one customer) and Road to Profitability, and prove their worth.

Those who are able to prove; will survive, and the rest may turn acquisition targets, which will also be the drivers of consolidation in this space.

This means that there are going to be more M&A activities this financial year across several big and mid-sized eCommerce companies, as well.

But the immediate impact will not be on the smaller brands, but instead, it would be on Snapdeal and Amazon, who are competing for the top positions in the market.

While it remains difficult to predict the eventual winners in this battle for the eCommerce crown in India, but it is for sure that more consolidation, down rounds, funds squeeze, and more, are eminent!