FindMyStyle.in: an initiative by Snapdeal to provide the offline in-store shoppi 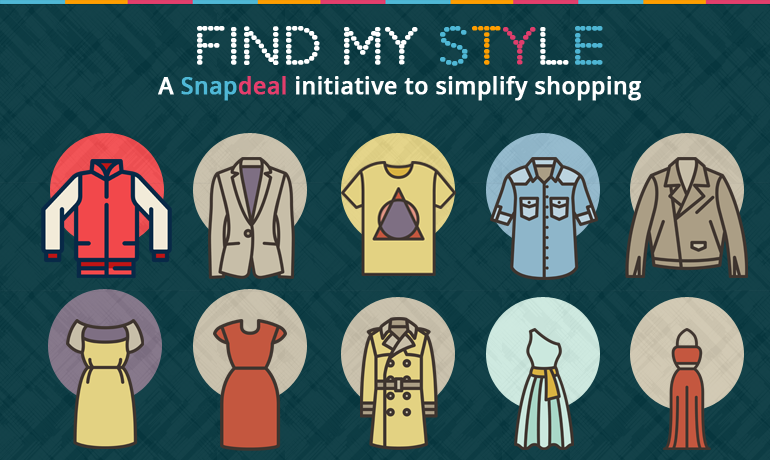 Developed at Snapdeal’s Multimedia Research Lab (the experimental playground for their in-house engineers and scientists); FindMyStyle.in is a technology that helps to simplify the online shopping experience for the users. It offers an enriched shopping experience by bringing in-store experience online.

It has been developed by analysing customer’s browsing and purchase patterns, which has been combined with intelligent technology solutions, to forecast or foresee their needs. These are then used to offer a range of choices with minimal search!

Overall, it is a combination of Advanced Machine Learning and Image Feature Computation, which makes style discovery automatic and helps users find the perfect style.

This all, might sound a little confusing, till you understand how the website actually functions in detail; but in general, FindMyStyle.in adds a new dimension, a new feature to the product discovery and purchase phase of the consumers, simply by enhancing the user experience.

What helps them stand apart is their Search Methodology! It is very detailed and tailored to a user’s preference and helps them to discover a product of their choice with ease while saving their time and effort.

This essentially doesn’t divide the category on the basis of price, brand or size, but instead, divides the whole product segment or rather the whole filtration process altogether!

Basically, this portal adds a further layer of analysis in order to pick visual elements from a chosen product and suggest various options with similar patterns, style, etc of the chosen product.

So customers describe the product, they wish to buy, and accordingly, the products that match the given description would be shown, without having to browse through a diverse range of available products.

To begin with – the entire process is completely automated, with absolutely no manual curation, no tags, or anything other than Image Recognition. It’s a machine learning process! Precisely why, the technology was launched as a separate portal, instead of being introduced into Snapdeal itself.

On Find My Style you can browse through all the fashion products that are listed on Snapdeal, but using a completely ‘Visual Interface’. Interestingly, these groupings have been completely done by using an ‘Image Recognition Software’.

It has used machine learning to group different types of products together, which have been divided into five categories for men, and five for women, and on the first page, you’ll see t-shirts, shirts, heels, or sports shoes.

For a consumer who has a certain product image in mind, it becomes easier to search through options that match the image in his mind, instead of scouting through a wide, unrelated, range of products.

Once you enter into a segment, you see different styles of clothing – you’ll see striped shirts, solid colours, formal and informal ones, etc post which, you can move on to the individual products of your choice, and then eventually you will be offered with options similar to the one you’ve selected, and when you’re ready to purchase it, you would be directed to Snapdeal’s main site.

You can also choose to browse through different styles again, and if you find something that looks good but isn’t quite what you’re looking for, then you can choose to view similar looking products, as well.

The idea is basically to bring the visual curation on the internet, that an “Offline Retailer” is able to offer a customer on the basis of their preferences!

What market segment are they targeting?

Well, to keep it short and precise; the purpose behind launching FindMyStyle.in is quite simple and straight!

The trio’s start-up “Fashiate” was acquired by Snapdeal in March 2015 by way of Acqui-Hire (a company that is acquired mainly for the skills and expertise of its staff, rather than for the products or services it supplies).

He started his career as a Research Intern with ‘IBM Research’ in 2006, while pursuing his PhD in New York. After working with them for over a year, he then joined ‘ObjectVideo’ in 2008 as a Research Scientist. This stint continued for a little less than 3 years.

In December 2014, Gaurav cofounded his first venture ‘Fashiate’ along with Nikhil Rasiwasia and Deepthi Singh and in just over 4 months, managed to sell it to Snapdeal.

Since then i.e. March 2015, he has been an integral part of Snapdeal and works with them as a Senior Principal Scientist and Head of their Multimedia Research Group.

While studying at the University of California (San Diego), he also used to work with them as their Graduate Student Researcher.

After completing his PhD in 2011, Nikhil joined Yahoo as a Research Scientist and worked with them for more than 3 years, and then he cofounded his first venture called – Fashiate in 2014!

In March 2015, he sold the company to Snapdeal and then has been working with them as their Principal Scientist, since then!

Deepthi has completed her Bachelors of Technology in Computer Science from the International Institute of Information Technology.

Soon after completing her education, she started her career with Adobe Systems as a Member of their Technical Staff, and in about 5 years, got promoted to a Computer Scientist in January 2009.

After working at that position for 3 years, she then moved on to join Yahoo Labs as their Principal Research Engineer in January 2012 and gave them 3 years of her life.

In 2014, she finally ventured out and Cofounded Fashiate, and in about 4 months sold it to Snapdeal in March 2015 as well.

She joined them as a Principal Data Scientist as soon moved up to become a Senior Director of their Multimedia Research Group, as well.

Together, they have transformed their ‘Fashiate’, into what we now call – ‘FindMyStyle.in’!

Why did Snapdeal start FindMyStyle?

Let’s start from the beginning…!

Apparel is one of the biggest segments in online retail, but finding the right products that suit your need, on the internet, still continues to remain a huge pain-point, and you end up browsing through a huge selection of products in hopes to find the right match. Especially, if you don’t have something specific in mind!

But on the other end, in Offline Shopping, customers have the leverage of an expert salesman who understands the customer’s need, and accordingly helps them with the best suited choices. This is something which seems to be missing in the Online Shopping space.

Additionally, just before the launch of FindMyStyle; Flipkart had launched Flipkart launched an ‘Image Search’ feature for their mobile app users. This was done to reduce the importance of, and dependence on ‘Sight’ and ‘Touch’ aspects that one looks for when they shop.

Hence, to solve the paint-point and to keep up with the competition – Snapdeal allocated $100 Million towards building in-house technology over the next three years, and created Multimedia Research Lab.

And eventually, as a part of this strategy, Snapdeal acquired Fashiate, and then launched FindMyStyle.in!

In August 2015; Snapdeal refreshed its UI/UX across Web, Wap and App, thereby enhancing navigation, browsing and purchase, which not only helped them to reduce page-load time by 25% on web, but brought down their crash rate to less than 1% as compared to the industry average of less than 4%.

And as a part of their experimental strategy; Snapdeal also announced their 11th acquisition of Silicon Valley-based “Reduce Data” in September 2015 for an undisclosed amount. Reduce Data assisted brands and advertisers with the help of artificial intelligence, real-time data and other tools.

The acquisition was made to build on the discovery platform, and associated tools for brands and sellers in their marketplace, and the same.

As a whole, Snapdeal has lately been investing a significant amount of time and money in enhancing the UI and UX for their website as well as mobile users.

But this is not just to keep up with the competition, given that, Flipkart too has inclined their focus towards UI and UX; but also because upon understanding their customers they have understood the pain-points they face in online shopping.