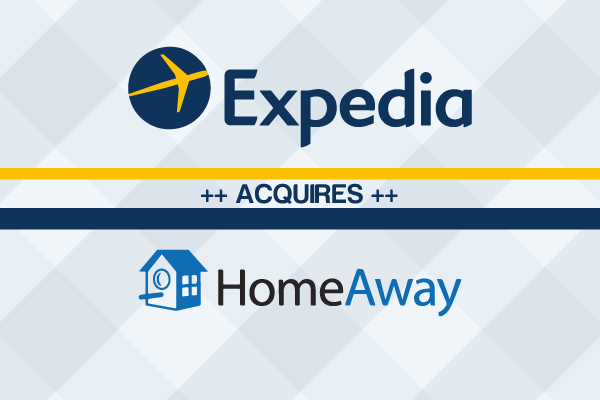 Expedia is on the verge of becoming an online travel superpower!

Expedia seems to be on a shopping spree lately and has gone on to acquire Travelocity ($280 million) and Orbitz Worldwide – which owns Orbitz.com and Cheaptickets.com ($1.38 billion) in the recent past.

Continuing the spree, it was recently announced by Expedia Inc. that it would be acquiring the publicly traded vacation rental service ‘HomeAway’ along with all the brands under it, for a whooping $3.9 billion in cash and Expedia common stock as well. As per the reports, the transaction shall most likely close around the first quarter of 2016.

HomeAway was founded in 2005 and it allows users to arrange vacation rentals at 1.2 million properties in 190 countries around the world. It has been a publicly listed company since 2011.

In recent years the company has also made a range of acquisitions to stand strong in front of its competition. Some of these include: – BedandBreakfast.com, VRBO.com and VacationRental.com in the US, and similar sites in the UK, Germany, France, Spain, Brazil, Australia and New Zealand as well.

Now as soon as Expedia announced that it would be paying $38.31 per share for HomeAway, that is 20% higher than HomeAway’s original price before the deal, HomeAway’s stock price jumped to $40.15 in a day’s time in New York, while Expedia shares jumped 2.3%.

There was also a rumour amongst the investors that the rival groups would also place a counteroffer to the bid, but to their surprise, nothing of that sort happened.

WHAT’S IN IT FOR EXPEDIA?

Let’s start of by saying that, the end-game for Expedia is to create an online travel giant that stands strong in front of Priceline and its dominant site ‘Booking.com site.’ Priceline currently has a market capitalization of $57 billion, while Expedia stands at a $10 billion valuation.

Now Airbnb and other start-ups in the present travel market are seen to be changing the dynamics. They are doing so by introducing new tools that competes with lodging operators and cannot be directly searched via websites like Expedia. Keeping that in mind, in an attempt to stay ahead of the competition and to respond fittingly, Expedia has introduced their own service that is based on people renting out their rooms and homes.

So this deal is definitely a win-win for all. It will leverage Expedia to deliver best-in-class experiences to an even wider audience globally; it will help HomeAway to receive the desired distribution, technology and expertise from Expedia; and the consumers can also expect a lot of home-rental inventory being displayed via Expedia.

According to the CEO of Expedia – Dara Khosrowshahi, the company aims to become the fastest growing $100 billion alternative accommodations company. They had been doing so since the last two years in partnership with HomeAway. But now, the company has moved a step further, and has taken the next most logical step by adding HomeAway and its leading brands to their portfolio.

Well, this acquisition places Expedia along with its army of subsidiaries like – Hotels.com, Hotwire.com, Travelocity, Orbitz and Venera, directly in competition with Airbnb.

Although, much cannot be anticipated at this point in regards to how the acquisition will affect the rivalry between HomeAway and Airbnb (valued at $24 Billion), but it is certain that the backing of Expedia would give HomeAway the resources to compete more effectively.