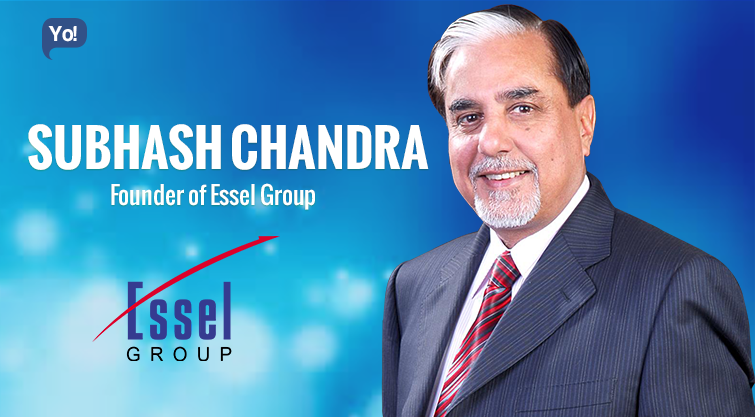 Born on the 30th November, 1964; Subhash Chandra is the Founder & Chairman of the $4 billion Essel Group.

Subhash often referred to as the Media Mogul of India, is not only the pioneer of country’s first satellite Hindi channel Zee TV but has also revolutionised the television watching experience in India. The Zee Network which comprises a range of other channels has a loyal viewership of over 500 million in more than 167 countries.

Being a high school dropout; Subhash – the self-made man has time and again successfully proved his abilities to find the right kind of business and has also led it to the path of success.

Personally speaking; He is the father to two sons – Amit Goenka & Punit Goenka, who now have taken over the reins of the family business.

Business was in his blood and the same could also be seen, even as a child. He started with his schooling at a local village school which taught only up to the primary level, and then continued it at CAV School in Hissar from the fifth grade onwards. He was placed under the guidance and protection of his grandfather – Jagannath Goenka, which not only taught him business from the roots, but also left an everlasting impression on the young boy.

Back then, Jagannath Goenka had three primary businesses of buying and selling grains for a fixed commission, warehousing and money-lending. Subhash used sit with his grandfather every day after coming back from school, and would help him out to write letters to hundreds of people or clients.

Under his grandfather, Subhash learned the three most important lessons of life: “have no fear, never go back on your commitment, and do not stray from the path of truth.” Not only that but, he also taught Subhash how to analyse people, how to observe people closely and understand their motives or intentions through their behaviour.

Subhash often used to go to the village bazaar along with his grandfather and would collect & bring all the information or gossip from and about people. This taught him to constantly keep his ear to the ground.

TRIVIA: – He was known as Subhash Chandra Goenka (Goel) earlier, but changed it to Subhash Chandra as he thought that independent India was being divided by the political establishment.

The Entrepreneurial Journey Of Subhash Chandra!

Phase I – ENTRY OF SUBHASH

Subhash always had a dream to achieve success by become an engineer, but destiny had a different in store for him.

In 1967; the family had set up “Adarsh Cotton Ginning and Oil Industries” and due to the mismanagement of the business by a relative, the family business had to suffer huge losses and also had a series of reverses in their cotton trading business. And eventually, the company had to be shut down!

And to make matters worse, brothers Jagannath and Inder Prashad decided to split the business and even though, the businesses had net shortage of about Rs. 600,000 at that time, he gave Inder Prashad Rs.50,000 cash along with equal properties.

Now Subhash’s family was not only bankrupt but also had huge loans that needed to be paid to his friends and relatives.

Looking at the adverse conditions of the business and the family, Subhash was asked drop out from college because they couldn’t afford the fees and join the family business.

Instead of falling apart, Subhash refused to bend down to the problems, and decided to fight it face-to-face. Now at the minor age of 17, with absolutely no other investment apart from Rs. 11 in pocket, it certainly isn’t an easy task to drive a bankrupt business.

But like they say – “when you got nothing to lose that is when you truly begin to win!”

Similar was his case as well. In 1968-69, Subhash happened to meet the manager of the Food Corporation of India (FCI), who surprisingly gained a liking for this boy.

Now FCI was used to be the supplier to the Indian Army, who was a huge buyer of grains, pulses and dry fruit. But as FCI wasn’t able to meet the high standards set by the Army, he asked Subhash to upgrade the product by polishing pulses and cleaning barley. With this contract, not only was the family back in business, but that too without any significant investment, and there was no looking back from here.

In 1971, Subhash shifted the company base to Delhi and leased a Dal mill as well, in attempts to evolve from agriculture to industry. And over the period of next five years, he went on to burn his hands in many out industries as well.

But in 1976, Subhash got his first big break, when FCI was frantically looking for space to store 14 million tonnes of food grain and his one small suggestion opened doors to another genre for him.

He suggested FCI to store food grains out in the open under polythene sheets. This simple yet brilliant idea was welcomed by FCI, and subsequently, he also got the contract for the same.

And thus, began the entry into the business of buying polythene sheets and then cutting and welding them into tents.

In the next some time, he also went on to set up Lamina Packers, to manufacture laminates for packaging pharmaceutical tablets and other products of international quality on indigenous machinery.

In addition to that, he also set up a manufacturing plant to supply empty capsules to the pharmaceutical industry, and also acquired a firm that used to manufacture hand tools.

The year of 1981 was the year of Economic Liberalization for India and this came as a blessing for young entrepreneurs like Subhash.

The same year a bilateral trade agreement was signed between India and the USSR (Soviet Union), due to which, Subhash’s Rama Associates (setup in 1976), won a lucrative deal to export rice to the USSR which started with export of 30,000 tonnes of rice @ Rs.5,500 / tonne, and went on to increase to an addition of soya bean and selling of grains worth a billion.

Next, in an attempt to replace the old age packaging of toothpaste packaging of aluminium tubes, to laminated tubes or soft squeeze tubes, he launched of Essel Packaging in 1982.

After facing a lot of time-bound hurdles and losses, Essel Packaging (now Essel Propack) today has finally become the world’s largest manufacturer of laminated tubes, and has a presence in 13 countries.

Following the success of Essel Packaging, Subhash again got an itching for something new. He bought 753 acres of land in Gorai, Mumbai, and introduced – Essel World, the Indian version of amusement parks, in 1989. 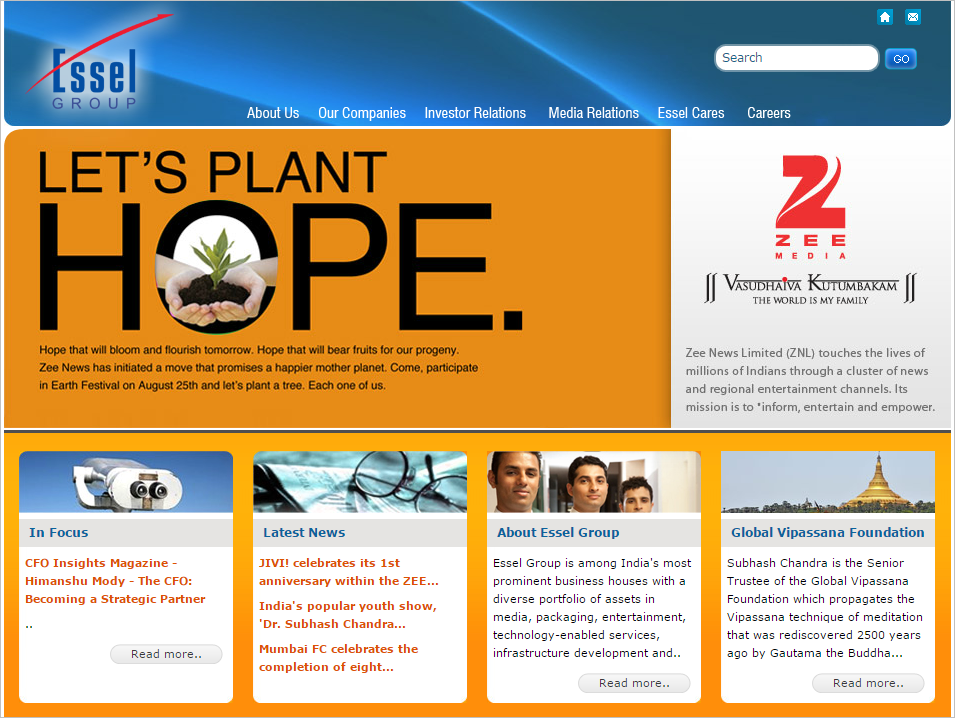 Later, inspired by Doordarshan he wanted to launch a private satellite television channel in 1990.

But he saw that foreign TV channels could be seen in India, but the law did not permit Indians to start a TV station. After facing many unending restrictions and hurdles, from the Indian government, Subhash finally, decided to take the other route.

In December 1990, Hong Kong had granted a licence to a joint venture of the Chinese government and Li Ka Shing to launch a satellite to begin a Direct Broadcast Satellite (DBS) service in Asia called AsiaSat – (Asia Satellite Telecommunications Co. Ltd.).

After chasing the CEO of AsiaSat – Li Ka Shing for a long time, his offer of $5 Million (almost triple the actual fee of $1.5 million) was rejected on the grounds that, the transponders will be leased to only one Hong Kong based company named – Satellite Television of Asian Region (STAR). When he approached STAR, which was owned by the son of Li Ka Shing, they too denied.

But soon the tables turned for Subhash!

STAR had hired an investment banker for the lease of the transponder to the potential Indian businesses with media credentials. Even after aggressively trying, they couldn’t find a buyer who was even close to Subhash’s bid, because of which they were forced to go to him.

To convince them further, Subhash hired a helicopter and took him to Essel World, the packaging plant and all his other estates and also told him about his dealing with big FMCG companies such as Colgate, Lever and P&G. This changed Li’s mind and finally an agreement was signed.

Additionally, to fund the rest of the project, he raised money from Hong Kong based Sir James Goldsmith and Kerry Packer, three non-resident Indian friends and some other venture funds.

The other problem they faced was that, the Secretary for Information and Broadcasting, Government of India brutally shot down his proposal.

Now, because he didn’t get any clearance from the Indian Govt, he very smartly changed the name of his Hong Kong based Empire Holdings Ltd to Zee Telefilms Limited in 1992, and provided content to Zee TV Hong Kong, which in turn streamed the signals back to India.

He hired Karuna Samtani, an ad film-maker and started off initially with only three hours of programming, which was then increased to six hours. And with that they ended the monopoly of Doordarshan.

The programming was very cheap with barely a cost of Rs.30,000 an hour. This formula of cheap programming worked for him and Zee became an instant success.

In less than six months, Zee had become the talk of the town and was now reaching out to almost 12 million homes across the country. Soon, Zee became a 24-hour entertainment channel as well.

But things turned scary when, in 1993, News Corp Chairman Rupert Murdoch bought a 63% stake in STAR. Although he was least bothered about the business from India initially, but the moment he saw that out of the 20 million homes that STAR reaches, 12 million were Zee India, he decided to up his ante.

Subhash began to feel the heat from Murdoch and thought of looking for an alternative to AsiaSat. But shortage of funds to invest in another transponder was creating a huge barrier. With no option left, he with a heavy heart, eventually bowed down and sold his 49% stake in Asia Today to Murdoch.

The shareholder agreement between the STAR and Zee clearly stated that STAR would concentrate only on English content, but breaching the terms, STAR had begun streaming Hindi content as well. This gravely soured the relations between them.

Murdoch began bullying Zee and even offered an unsuccessful bid of $2 Billion as against the company’s valuation of $500 million, to acquire them.

Subhash in turn sued them in London and, both the companies had to finally settle the case in 1998. Subhash paid $180 million for Murdoch’s share of Asia Today & Siticable, and thus came the partnership to a final end.

Since then, there has been no looking back for Zee or the Essel Group.

In more than a decade, Zee has gone on to become one of India’s most viewed channel and now has a wide presence in 167 countries with a viewership of 500 million.

As a whole, the $4 Billion Essel Group with strength of around 10,000 employees, is now managed and run by his sons Punit & Amit. Today the group collectively holds a diversified portfolio of a range of companies segregated in various sectors like Media, Technology, Entertainment, Packaging, Infrastructure, Precious metal, Education, and many other Charitable organisations.