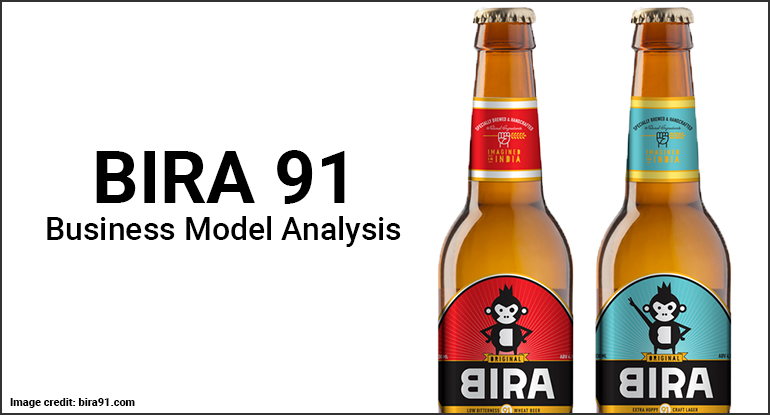 Giving the traditional brands, a run for their money!

With a $5 Bn market share of the consumer categories, Beer is known to be one of the largest and one of the fastest growing in India (compared to $300 Mn for branded café/coffee market). Within this alcohol beverage category worldwide, Craft beer has turned out to become a bright spot, and now commands for more than 30% share of the profits of the American beer market.

As per Technavio’s lead food and beverages analyst, Vijay Sarathi – craft beer started with just two microbreweries in 2008 and grew on to around 45 by 2015.

And even though it still accounts for a very small share of the overall beer industry, microbrewery concept has seen a dramatic rise in India and beer lovers have also begun to look for more beer options, and this is believed that this is the perfect time microbreweries to enter the Indian market.

Headquartered in New Delhi, Bira91 registered as B9 Beverages Private Limited and a part of the parent company – Cerana Beverages is India’s first and leading Craft Beer Company.

It also owns and operates the country’s first and largest craft beer distribution network amongst the restaurants and bars.

Interestingly, the logo of Bira91 is a reverse B, which according to them, shows a spirit of rebellion against the conventional, and 91 is a reference to the international country code used to dial India.

To give gist – Craft beers are typically manufactured in small volumes in microbreweries, with a high importance on quality, flavour and traditional brewing methods.

Even though, Bira91 has been imagined in India, but it does not contain any form of Indian barley or wheat. The process of its manufacturing includes a careful selection of world’s best ingredients such as: malts from France & Belgium and hops from Himalayas and traditional Bavarian farms. It contains 4.9% Alcohol by volume.

The product has been launched in both Draft (tap) format and in 330 ml bottles, and its prices vary between ₹100 to ₹300 depending on the location and requirement.

The company has adopted a “tap-first” launch strategy across bars and restaurants and their offerings includes – Bira91 White (a low bitterness wheat beer) and Bira91 Blonde (an extra hoppy craft lager), which have been made available in draft and bottle formats.

Bira91 White Ale: It is a refreshing craft beer that can be had all day, and is brewed with some of the finest natural ingredients. Every sip of this beer gives you the feel and essence of its handcrafted aspect.

The uniqueness of Bira91 White is that, it is a deliciously different wheat beer with the lack of bitterness, along with a pinch of spicy citrus and a soft finish.

Other than that, what is most noticed is that, the biggest difference comes once the libation first touches the tongue. It gives a taste or feeling that is sweeter, more acerbic, and citrusy, than the normal beer.

BIRA Blonde Lager: It is more conventional in taste along with a huge contrast than the usual beers. Blonde is available in rich in colour, and is made with two row barley, extra malty and is also filled with delicate aroma and a noticeable pinch of bitterness.

What is their Market Segmentation? What kind of Partnerships & Strategies they adopted?

To begin with – With a strong focus on taste and experience, Bira91 was started with a primary aim to fill the gap in the market for a trendy, unorthodox, fun and smart brand of beer. A beer that could swiftly be positioned between the Indian and the expensive imported beers!

And the perfect target audience for this would be none other than the youth! Their target is to reach out to the young, urban, Indian consumer.

To successfully target this audience, their strategies were pretty straightforward. The company strictly works on a simple foundation of combining—availability with affordability!

To do so, firstly, they made sure that, everything from – name, look, feel, taste, positioning, etc was Indian.

And when it came to spreading the word, they didn’t do any kind of marketing, campaign, or gimmick, per se. All they did was – made their product line available in a few pubs. People tasted it. People liked it. People made it go viral.

It was pure word of mouth!

To add to that, they have also managed to gain a 30% share in the premium segment, that too, without spending anything on traditional marketing.

Lastly, talking about their partnerships – Cerana Beverages had initially started off by exclusive importation of Beers in India, and continue to do so as well. For that, they have exclusively partnered with some of the most reputed brands in the world, including – Duvel, Chimay, Estrella Damm, etc…

Other than that, Bira91 has partnered with a total of over 150 retail outlets in New Delhi, 70 in Bangalore, and so on. Their products have exclusivity on tap. Some of their tie-ups include: – The Beer Cafe, Three Dots & A Dash, Doff Pub, Jimi’s Beer Cafe, Take 5,

Additionally, the company has also adopted an Uber-like City CEO model as well.

Ankur currently heads and runs the company as their CEO. He has completed his Bachelors of Science in Computer Science and Management from the Illinois Institute of Technology in 2002.

While studying with them, Ankur had also Interned with companies including Molex Inc (1 year 1 month) and Motorola (1 year).

After completing his education, he began his career by cofounding his first company called ReliantMD in October 2002. Basically, it was a healthcare revenue cycle management firm, to help in the improvement of revenue generation / collection for their clients and providing EMR solutions as well.

While at it, he had also enrolled into the American India Foundation as a Volunteer in 2003, for about 3 years as well.

After a successful run of more than 4 years, he decided to sell off the company in October 2006, post which, he joined Reliance Industries Limited as a Consultant and worked with them on New Ventures, CSR and rural strategy for Reliance Retail. This stint continued for about 2 years.

Now since the very beginning, Ankur was well aware that he was not meant to work for others. So, once he was done with his education, he started his first venture called ReliantMD in 2002.

Around that time, since his venture was being incubated in New York, he frequently happened to visit the Brooklyn Brewery. There he got exposed to the brilliance of their many creations right at the brewery, which completely changed his taste of beer.

In 2007, he sold his company and decided to return back to India.

For the first couple of years, he began his research on the beer market, and also took a three-month road trip across Europe to identify beer brands that potentially would suit the Indian market.

After this phase, since, he felt that something was missing and he wasn’t quite ready to brew his own bottles yet, he decided to begin with importing and distributing craft beers that only connoisseurs were familiar with. And this is how Cerana Beverages came into being in 2008! Cerana Beverages used to import some of the most famous craft beers from around the world.

By 2013, Ankur felt that he was ready to launch his own brand. He reached out to his friends from college and collected $1 million from 6 of them and also hired a brewmaster from Belgium was hired as a consultant as well.

After all the preparations were done, Bira91 was soft-launched in May 2014.

Cerana Beverages also raised an undisclosed seed round of funding from senior angel investors from New York, Singapore and London, and senior executives of leading technology firms from Silicon Valley and private equity firms in New York, all of whom invested in their personal capacity, to make India’s first crafted beer.

Post that, the product was formally launched in February 2015 by the Belgian Ambassador to India – Jan Luykx, in an event that was attended by over 500 guests including socialites, models and celebrities.

It was first launched in Delhi and was also in preparations to be expanded to Kolkata, Mumbai and Bangalore as well.

Although, the beer was being brewed and bottled in Belgium, but Bira91 was also preparing to start the production here in India.

In the next few months, not only did they manage to start with one manufacturing unit each, in Maharashtra and Rajasthan, but they also managed to sell 10,000 cases in Delhi alone.

Talking about their recent developments – Bira 91, has so far managed to reach to point where it now sells 35,000 cases (2500 barrels) a month, and has also expanded its base to Mumbai, Bangalore, Kolkata, Goa, Pune and Chandigarh as well.

They now have a penetration of 70% in all their markets, and are growing at the rate of 30% month on month.