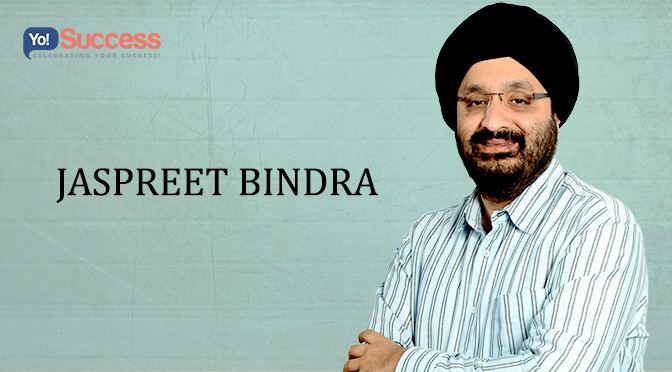 Jaspreet Bindra – the son of an IPS officer, a Bachelors in Chemical Engineering and MBA in International Business; chose to take the customary and safe engineering-management route but lesser did he know what life had in store for him!

From working for India’s largest business group, a top multinational to an internet startup; he’s done it all.

His professional life has trained him in almost all aspects from establishing businesses from scratch, creating a system, technology and operations, setting-up teams, leading businesses or teams, to most importantly turning around losses into profit. And to support and encourage the rest; he has also been helping the entrepreneurial environment by either mentoring or funding via channels like angel-fund across India.

Other than that; some of the causes he wishes to support and cares about are Animal Welfare, Education, Environment, Science and Technology!

Jaspreet has a diversified working experience which has made him what he is today!

His career began soon after he completed his business schooling in the year 1994; he joined the $50 billion Tata Group, through the Tata Administrative Services (TAS). Interestingly he was one of the five elite people who got selected out of 11,000 applicants that year.

In his 12 years of service with Tata Group; he took a break for a year and literally went on to start his own entrepreneurial Internet venture but eventually he sold off the same, and as he had gained some basic but solid learning about the internet, he came back to Tata to handle the sales and marketing of their Tata internet in 2001.

After a while; he was then moved to a higher position of a General Manager in Tata Administrative Services which included Tata Tele-services, Tata Tea, Titan, etc. where he spent the rest of his last five years with them. While he was at it; his profile demanded to manage two lines of businesses nationally for Tata Tele-services i.e. postpaid mobile business and ‘push to talk’ business. As a matter of fact; Jaspreet and his team were the ones to launch ‘push to talk’ in India, making Tata the first operator to do so in Asia.

After a 12-years long service with Tata; Jaspreet finally decided to move on to Microsoft (MSN India) as their ‘India Country Manager’ for Online Services Business wing in the year 2006.

Back then; OSB was the Microsoft’s consumer online business wing which included msn.co.in, Hotmail, Messenger, Mobile internet and the Ad Syndication platform and primarily Jaspreet managed the Indian P&L for the same. Under his leadership; their business grew by 225%, the team by 3x, attained great talent from Google / Star TV / Yahoo and most importantly grew their people score from 55 points to 84 points.

In his first, 3 year stint with Microsoft; he along with his team launched many new products and services like Ad Syndication platform, Coolhotmail, mobile search, etc. and won many awards for innovative online and offline marketing campaigns. His Leadership was such that; the company closed some highly important deals with Bollywood award functions (IIFA Awards) & several Bollywood movies too, mobile operators (Vodafone), the Indian Cricket League and many more. To add to that; Jaspreet was also a part of the team that closed a Merger & Acquisition deal with a mobile VAS player.

In 2008; Jaspreet got the opportunity to get promoted to the Regional Director for Retail, Entertainment & Devices, India for Microsoft and shifted his base to Gurgaon, India.

Primarily in this profile, he managed the Indian P&L of this business! Using his unique strategies like rightsizing, refocusing, portfolio rejigging, topline growth and bottom line management; in just 18 months itself, Jaspreet & his new team turned around the business to profitability.

And the numbers spoke for themselves too; by the end of FY11, Microsoft’s Retail business was more than $45million including the basic retail consumer business, marketing and selling XBOX, games, Office, Windows and PC Hardware.

His strategies were so reliable and farsighted that the business exceeded their revenue budgets and contribution margin targets QoQ for over 14 quarters with roughly a 5% forecasting accuracy.

At the same time and as a whole, he also made sure that he built a high performing team by retaining and hiring the right people and along with that also improved partner satisfaction scores from among the 5 lowest in the world to the highest score across Microsoft businesses in India.

After working for more than 6 years with Microsoft in various divisions; Jaspreet finally stepped down in 2012.

For a year Jaspreet took a sabbatical, after which he replaced the founder Sidharth Gupta & joined GETIT Infoservices as their new CEO to cater to strategic and tactical decision-making in 2013.

To give you a brief about the company; GETIT Info services pvt. Ltd. earlier known as M&N Publications – is a directional media company in India which provides services that includes yellow pages, white pages directories, classified media, tele-information services, online and mobile media.

The company was launched in 1986 and is also a founder member of Asian Vendors Inc. which is a Joint Venture between leading yellow pages and database marketing companies in eight countries across Asia. In 2002, the company redefined its profile from being just a directory publisher to becoming an information provider and a mediator that brought together buyers and sellers.

In 2013; Infomedia 18 (formerly Tata Press Yellow Pages) and Getit came together to form a single operation to cater to SMEs (Small & Medium Enterprise’s) and named themselves ‘GetitInfomedia’. Majority of the ownership of the group lies with Malaysia based Astro Group. GetitInfomedia now connects consumers and SMEs through multiple channels like print, WAP, web, Apps, voice and mobile.

As their CEO, Jaspreet’s primary task was to convert the company with a 1400 employee staffing into a digital and mobile led local discovery company which combined local search, classifieds, and E-commerce.

And goes without saying; he simply nailed it!

In his 20 months stint with Getit, he made a full acquisition of Infomedia 18 via an all-cash deal and integrated its operations with Getit; Reduced the team from 2400 to 1400 by increasing the productivity, outsourcing the tasks & rightsizing and built a solid management team across sales, operations, technology, legal, marketing, finance, HR; he reconstructed the systems, processes, IT, technology with the help of in-house executions and strategic outsourcing to reputed companies like HCL Tech, Tech Mahindra and Aegis; made use of technology, metrics & reporting systems and moved all infra and apps to the cloud; initiated & concluded business and strategic partnerships with Google, Yahoo, Verisign, WeChat, Ebay, etc. and lately in 2014 they developed a new local discovery product on apps & web for the next generation called ‘AskMe’ and launched it with its new Brand Ambassador – RanbirKapoor.

With such humongous changes and additions; the business revenues grew by 3 folds and to add to that it also put the company on a path to sustainable profitability.

And after his purpose for joining GETIT Infomedia i.e. “to convert it from a print media company to an online player;” was fulfilled, he decided to move on and look for newer challenges.

While working for Tata, Jaspreet realized that the internet business was catching like fire and it was obvious that the early starters would be the ones who will benefit the most. Hence, without wasting much time; he took a break from his job at Tata Group and started his first ever venture called Baazee.com.

Baazee was an online marketplace, just like Flipkart or Amazon. It also offered buyers and sellers an opportunity to interact, trade products and services and give feedback to each other. Initially his office, as he puts it, was a cyber cafe!

By 2004; Baazee had more than one million confirmed registered users trading from a wide range of categories from consumer electronics and computers, to home decor and jewelry. As the concept was new, innovative and much needed; it gained traction in no time!

But as Jaspreet received a lucrative &irresistible offer of a whooping INR 230 crores ($50 million) plus acquisition costs and post-signing adjustments; he decided to sell off the brand to Ebay in 2004.

His next or should we say, his current entrepreneurial venture happened in 2014!

After leaving his job with GETIT in 2014; Jaspreet decided to get back to entrepreneurship and started or rather is in process to start ‘Startopia’.

What’s Startopia? Well, as he describes it; Startopia enables entrepreneurs! Startopia is an entity which accelerates and promotes tech entrepreneurship in India on a scaled down version.

To put it simply; in his whole professional life, he has worked with start-ups (both funded and bootstrapped), entrepreneurs or larger companies and has primarily helped them to start up, build and scale their operations, recruitment of the right teams, secure funding, or make them digital savvy and not to forget this applies to all consumer internet, E-commerce, M-commerce, local/SME and SaaS businesses models.

So he has combined all his knowledge and skills of – operations, consulting, mentoring, funding, advisory; and aims to start Startopia.

Other than that; in general his entrepreneurial activities also include: