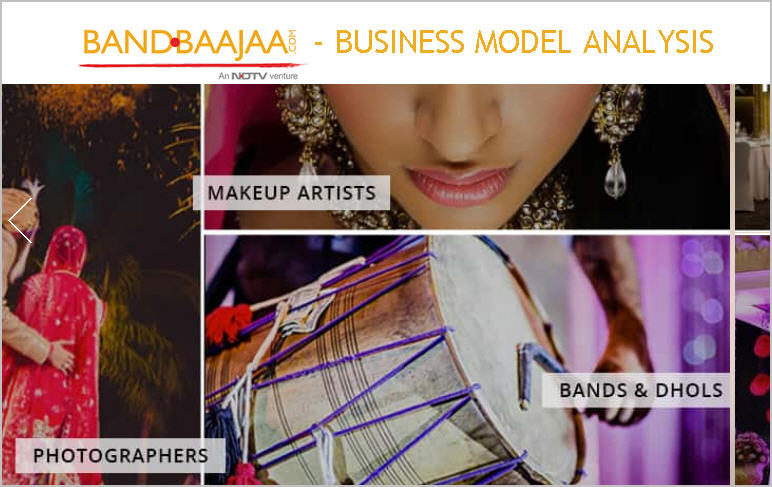 Launched in 2015 and based in Delhi, Bandbaajaa.com is the consolidated catalogue or an all-round Wedding & Festival Platform. It is currently managed and “Special Occasions Limited“, a subsidiary company of NDTV.

It helps you pull off a big fat Indian wedding with ease! From breaking the saddest stereotypical myths about marriages, planning proposals and celebrations, to interesting honeymoon locations, the portal offers end-to-end solutions for all the needs of an Indian wedding.

Bandbaajaa.com’s effort is to help customers by offering them with the best experience for every occasion that may be special that includes a perfect mix of right offerings, best vendors and creative ideas to make their whole preparation along with the big day look hassle free and memorable.

Since their business is based on a “Do-It-Together” model, not only do they help you plan, ideate, keep a track of all the tasks and execute the wedding, but they also help you execute it cost effectively as well. This is done using their budget manager, wherein you write down your wedding expenses and they tell you what to spend on and what to avoid.

Some of their offerings include sections such as: -

Purchasing anything from the portal is as similar and simple as on any other eCommerce website, and as far as the delivery is concerned, they offer free shipping, although, the delivery date may differ depending on the product and location.

You can find the same in the Order Confirmation email you will receive, post the order. One can also track the order by logging into ‘My order’ on the ‘my account page’. In any case or doubts, customers can also contact them on the: 782-782-0000 as well.

Lastly, let’s give you a gist about the parent company of BandBaajaa.com!

To begin with – BandBaajaa.com is an initiative of NDTV (New Delhi Television). Founded in 1988, NDTV is a commercial broadcasting television network that was started by husband and wife Prannoy Roy and Radhika Roy in India.

Some of their offerings include national news channels such as: NDTV 24×7 (English), NDTV India (Hindi), NDTV Profit (Business news) and NDTV Good Times – Lifestyle. They also offer some international channels such as ATN NDTV 24×7 and NDTV Worldwide.

Within this consortium – and over the period of time, NDTV has transformed themselves from a pure television player, to a digital media company as well.

Other than BandBaajaa.com, their digital offering also includes:

Carandbike.com: A portal run and managed by Fifth Gear Auto (a subsidiary company of NDTV) is their auto portal that acts as an eCommerce site for all your needs related to cars and bikes.

Gadgets 360°: An eCommerce portal run and managed by NDTV Group’s Red Pixels Ventures Ltd is a marketplace for mobile phones and other electronic gadgets.

SmartCooky: A portal run and managed by NDTV’s SmartCooky Internet Limited, is a healthy food website, which offers tried and tested recipes, latest food news, and lifestyle and health articles by top specialists.

What kind of Partnerships Do They Have?

They have an expert team that has managed to bring together the best of the vendors and professionals in India under one roof.

These listing of theirs includes various wedding services such as venues, photographers, DJs and entertainment services, choreographers, bands and dhols, wedding decor, invitations, makeup artists, etc… along with different kinds of clothing best suited according to the occasion for both, brides and grooms, and can be differentiated based on the theme, colour or culture.

For the same – BandBaajaa.com has got on board some of the best designers from across the nation including Neeta Lulla, Anju Modi, Kisneel, Prama, Kylee, Neha Mehta, etc…

In total – the company accounts for a list more than 1500 vendors and professionals divided across various services along with listings of 5000 products for sale.

What Is Their Targeted Market Segment?

To begin with – Weddings are widely claimed to be a recession proof business by many experts, and more specifically the Indian wedding industry, is said to be a $40 Bn market with a 20% year-on-year growth. There are 10 million weddings that take place every year.

But the fact remains that, this market still remains to be highly unorganized, and has also been operating the same way for decades as well.

Nevertheless, a lot of positive signs have been noticed in the recent times. This market has shown concrete signs that it has become ripe for disruption. Additionally and evidently, there has been a dramatic growth of the internet population and smart phone users as well.

The current tech-savvy young generation of India is seen to be evolving and does not want to follow the age old trend, and has been seen finding new, creative, innovative ways and with a minimum fuss, to organize these events. They are looking for answers on how to achieve their dream wedding and bring it to reality.

With 360 degree solutions, this is the market segment BandBaajaa.com wants to target, and have also begun by making their listings available across 20 cities including Chennai, Coimbatore, Pune, Mumbai, Bangalore, Ahmedabad, etc.

What kind of Strategies Have They Adopted?

In an attempt to strengthen their digital advertising revenue, NDTV Convergence has signed a three-year deal worth more than ₹90 crores with Taboola.

Taboola is a content discovery platform and one of the most dominant distributors of sponsored content, or ads in the internet world.

NDTV will be using Taboola’s mix of free and sponsored stories, to place them at the bottom of their own articles on NDTV’s websites, in attempts to boost their readership and ad revenues.

Before working with Taboola, NDTV used to work with another company which earned them around ₹30 lakhs a year in revenue. But since the time they partnered with Taboola, the business has scaled up to ₹10 crores, in just about a year. Due to these stats, NDTV had decided to get into this deal.

Who Would Be Leading This Brand?

Sachin Singhal has been appointed as the CEO to lead this venture of NDTV.

He has completed his Masters in Computer Science from the Vellore Institute of Technology, and has also received a Gold Medal from there as well.

Sachin holds a 10+ years of diversified working experience with internet start-ups and had started his career in 2006 with Tata Consultancy Services (TCS) as a System Engineer.

After this 17-month stint, he then moved on to work with CafeGadgets.com in October 2007 as their Head for Marketing & Strategic Alliances. He worked with them for around 2 years, executing or managing tasks including: SEM, SEO, SMO, Pay Per Click (PPC), Affiliate marketing & Referral Program, etc…

In July 2009, he joined Letsbuy.com as a VP for Marketing & Alliances for about 8 months to manage a whole range of Managerial tasks, post which he went on to work for Naaptol Online Shopping Private Limited in February 2010 as their Business Head for their eCommerce section.

This was a Five-and-half-year stint, after which he took over the biggest opportunity so far, and got on board with NDTV’s Bandbaajaa.com as their new CEO in August 2015.

Since the wedding market has seen to be dramatically changing and evolving, NDTV Convergence had also launched Special Occasion in 2015 in attempts to capitalize on the same.

This was followed by an announcement of an undisclosed round of funding at a valuation of $20 Million from CerraCap Ventures – a US based venture capital firm. Baseline – a Sports marketing, entertainment & licensing firm, was responsible for the partnership between NDTV and CerraCap.

Talking about their revenues – NDTV’s digital business has been reporting a Quarter-on-Quarter growth consistently. In Q2 of 2015, they reported revenues worth Rs 20 crores, which further increased to Rs. 26 crores in the Q3 of 2015, and most recently to Rs. 30 crores in the 4th Quarter of 2015.

Lastly, since their wedding segment is very new, there aren’t many things to talk about. But it is certain that, we can expect a lot of developments in the coming future.