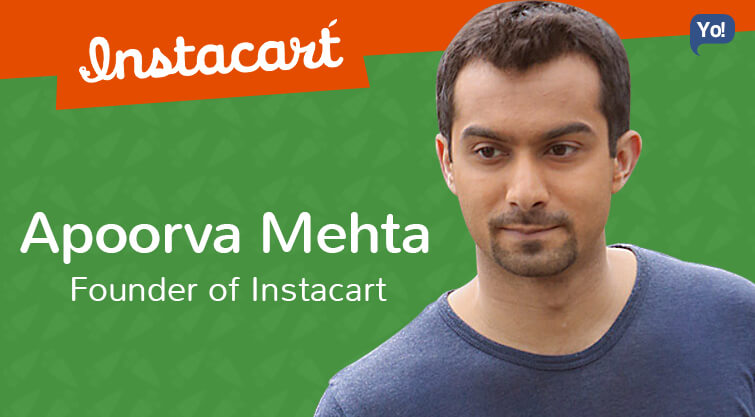 The handsome Apoorva Mehta is the founder of Instacart. Formally speaking Instacart is an Internet-based grocery delivery service. Apoorva had co-founded this venture along with Max Mullen and Brandon Leonardo in 2012.

Started with literally nothing, this man went on to try a range of different ideas only to come down to a pain-point he personally faced, and eventually started Instacart. Today the San Francisco-based company not only holds a list of 1000+ shoppers and more than 200 employees who help them cater to their clients, but is also valued at $2 Billion.

This definitely is a huge achievement for the 28 year old founder, who has managed to remove the age old taint of Webvan on the sector, and succeed with a near-to-perfect Business model.

Talking about his qualifications; Apoorva has completed his Electrical Engineering from the University of Waterloo in 2008.

The Story From Amazon.com to Instacart

Now his journey into the mean bad corporate world began soon after Apoorva completed his Engineering in 2008, when he joined Amazon.com as their Fulfilment Optimization SDE. His profile at Amazon included making sure that the delivery of the packages was done quickly and efficiently to the relevant customers.

Blast From The Past

Although he was working for the company, but after a while he had understand that since this was a huge corporate, the learning would be minimal and if he had to become something, he will have to do something by himself.

Having thought that, he left Amazon in 2010 and began developing ideas for a start-up.

He went on to burn his hands and failed in a range of start-ups, only to learn what he needed to and succeed in the ultimate one.

Now although a complete list of all of them has not been disclosed by Apoorva but after moving to San Francisco, he and a co-founder had developed 20 different products starting from Groupon for food to a social networking site for lawyers called LegalReach, only to find out that his approach in general was only wrong.

You may ask why?

Take for instance LegalReach. This product was put into motion, and the platform building had begun even before they got clarity about if the lawyers wanted such a platform or not?

To add to that, Apoorva had also raised money and gathered a team even before realizing that the idea in actuality was a dead end. They didn’t have any idea about lawyers or their functioning in general.

They hadn’t done their end of the research before starting the business and it turns out, that the lawyers did not require such a portal and didn’t like technology or sharing things. Anyway, eventually after shutting the portal, he also parted ways with his cofounder.

After the failures he went through in this one year, he asked himself whether he should have quit, but ultimately realised and learned that dealing with failure is part of founding a successful company.

By now he had understood that as a founder you have to be extremely flexible and patient. You may have to go from one failure to another without losing your cool or confidence, because you don’t really know which next step, or the next product you pick would go on to make the desired difference and become a success.

This is for all those who think that getting into entrepreneurship and becoming a Million/Billion Dollar Venture is simple. Breaking the bubble for all them, it isn’t! As a matter of fact, it is far more difficult than your regular day job.

The reason to start a company shouldn’t just be because you want to start something of your own, it should be to solve a problem, a pain-point that you’re facing and the one you really care about.

All what happened in the past was universe’s way of bringing Apoorva to the idea he was supposed to.

Now since a very long time, the one thing that used to hinder Apoorva the most was the pain of grocery shopping. While working with Amazon, he was always busy and never used to get the time to store the groceries or to go down every time to get it too.

And the worst part was that even with companies like Amazon Fresh who used to offer a helping hand with their delivery services, unfortunately didn’t have the products he looked for.

This got him to thinking that just like him, there would be many others as well who would be facing such an issue. That is when the idea of Instacart first hit him.

He began his research on the model he had in mind, which is when he came across the story of one of the biggest failures of the past – Webvan!

To give you a gist of their story – running a grocery business online as we all know is one of the most expensive businesses ever. It has so many costs involved apart from the website itself.

Webvan was a start-up in the late 90’s that was heavily backed by investors who were pretty sure that, that was the right time to sell groceries online and had their own infrastructure & stuff. In a fit of desperation, they went public much before they proved to be a workable business model which is where they went very wrong!

They invested all the money into warehouses and convoy of trucks and tried to replicate Amazon’s idea but what they forgot was that Amazon had their shipping done through UPS. Thus, the company couldn’t bear the costs, lost millions of dollars and eventually went bankrupt within less than two years after their IPO.

This was a huge lesson for all!

But now the times had changed and techies and investors were ready to taste the sector once again. With that thought and lesson in mind and after fixing all the mistakes Webvan had made, Instacart was launched in 2012, two years after leaving Amazon.

So what exactly was Instacart?

To begin with; unlike Webvan, there were no warehouses, inventories, delivery vans, etc., basically no physical costs!

And on the delivery end, the company had opted for an Uber-style “sharing economy” model, wherein they had willing part-time or full time workers with their own cars called ‘Shoppers’, and all they had to do was log-in to the Instacart system when they were available to shop and take orders. In other words, all they did was capitalized on services rendered by others!!!!

Yes, there were and still are half-a-dozen firms like AmazonFresh, FreshDirect and Peapod who offer grocery delivery in the US, but Instacart unlike these had opted for a decentralised business model that borrowed services from others.

And talking from a customer’s point-of-view, shopping through their site or app was pretty simple too! All a customer needed to do is;

From here onwards the order will be passed on to a personal shopper who would navigate the shopping process with the Instacart shopper app. This app also has a map of the supermarket which helps them locate stuff. And in a matter of no time, tadaaaa… your order would be at your door step!!!

If you like your personal shopper (apart from dating them of course), then you can also give them a tip, either during checkout itself, in cash when your order is delivered, or when you receive the receipt.

Clearly, the idea was amazing and was a far more dependable model as compared to Webvan. His confidence increased even more when he saw that, unlike his earlier failed start-ups, his friends were using Instacart without him requesting or pleading them to do so.

Soon as the business grew he also began to feel the crunch of funds, which is when he decided to apply to the incubator called YCombinator, but to his luck, he figured that he could not apply because he had missed the deadline by two months.

Although, he did manage to get in touch with quite a few YCombinator’s leadership team, but got the same response that he was too late. One of the partners called Garry Tan even told him it would be “nearly impossible” for him to get in, but that “ nearly” what kept his hopes, and he sent Tan a six-pack of beer using Instacart’s delivery service, which got him a meeting.

In that meeting, they told him that they would give him a call, if they decided to fund him. Even though it sounded cold but he still maintained his hopes. And luck played its part and he got a call in a few hours to inform him that he was in.

Due to its unique business model, act of convenience and service, the company has taken the masses with a wave and has managed to gain momentum in a matter of a blink. Its demand is so much that it has been experiencing a 15-20% customer growth WoW (Week on Week).

It has also managed to capture the markets of 17 cities, including New York, San Francisco, Chicago, Boston, Austin, Seattle and Los Angeles.

Along with that, it has 50 full-time employees and more than 1,000 independent shoppers under contract, many of whom are either college students or middle-aged housewives looking for flexible work.

The service is now also provided through a smartphone app which is available on both iOS and Android platforms, apart from its website.

The company has also come up with something called as - Instacart Express, which is a ‘yearly subscription’ that offers free 2 hour delivery on orders over a certain amount. It also waives alcohol and busy pricing fees.

Other than that, when there is a high demand for deliveries, something called as “Busy Pricing” comes into effect, due to which a dollar or more is added to the delivery charge.

The company is said to be making over $100 million in revenues (as of 2014), and is expanding faster than Webvan or Amazon Fresh. So far, the company has also made one acquisition of ‘Wedding Party’ in August 2015 as well.

As of April 2015, with about 200 employees, the company holds a valuation of $2 billion. More recently, the company has hired Ravi Gupta as their first CFO.

Talking about their funding; the company in total has raised $274.8 Million in 5 rounds from 25 investors including – Kleiner Perkins Caufield & Byers, Andreessen Horowitz Sequoia Capital and many others.