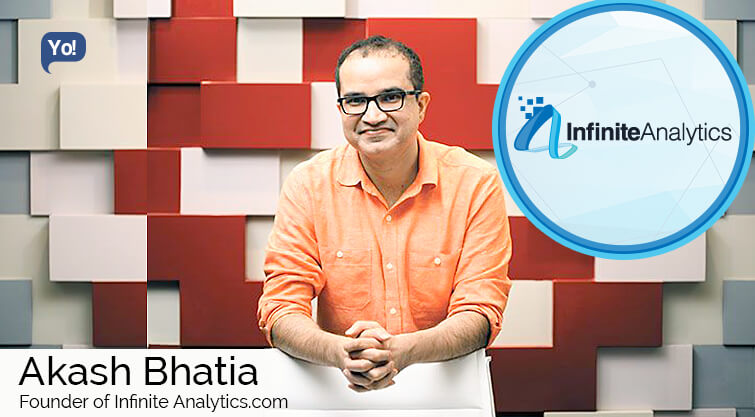 The lesser known 38 year old man Akash Bhatia, is the founder of Infinite Analytics and KyaZoonga.

He recently received his ‘claim-to-fame’ moment when Ratan Tata funded his start-up and wrote a cheque to Infinite Analytics.

Infinite Analytics is a company that would be very difficult for a layman to understand but simply put – is a cloud-based big data company that with the help of its tools, predicts the consumer behaviour very accurately (higher than its competitors) which is primarily based on the information shared by users on their social networking sites.

Whereas his first company KyaZoonga, is known to be India’s first nation-wide interactive entertainment-ticket aggregator portal. But unlike its competitors, KyaZoonga offers an environment just like that of a social network.

Personally speaking, a lesser known fact about him remains that he is one of the most highly qualified person in Business. Some of his qualifications include –

Akash is also a die-hard movie buff, who also tries to be a movie maker, loves water sports and is a passionate windsurfer.

Life As An Employee

He began his career soon after he completed his Masters in Transportation Engineering from the University of Cincinnati at one of the most reputed corporations in the Silicon Valley – Oracle Corporation India as a Senior QA Engineer in 2000.

After working there for two years, between 2002 and 2004, he moved on to work with companies like Crescent Systems, Acteva, and PeopleSoft, Inc on different positions such as Senior Business Analyst, Senior Accounts Manager, and Senior QA Developer, respectively.

By working for these companies he not only managed to gain immense knowledge technically but also learned how a business functions on a larger scale. Later, PeopleSoft got acquired by Oracle and hence, began another journey with the company he had started his career with – Oracle USA in 2005.

While at it, he got a whole different set of technical knowledge and managed to work of understanding and developing test strategies for Oracle Fusion, developing complex test strategies, plans and test cases for PeopleSoft Applications, creating roadmaps for the Quality Assurance team in the India Development Center, and a lot more!

During his three year stint with Oracle USA, he managed to quickly get promoted from the role of a quality manager to a Principal Consultant and then Senior Product Manager, consecutively.

In 2007, he decided to leave his well paying job and take an altogether a different route in his career. He became an Entrepreneur!

Life As An Entrepreneur!

Now just like every talented person, he wanted to fulfil his entrepreneurial aspirations since a while, and in 2007 finally he decided to do so. While at it, he noticed that India was missing a ticket aggregator.

Hence, much opposite to his past working experience, he started KyaZoonga.com along with Neetu Bhatia (investment banker turned entrepreneur) and Arpita Majumder (Senior Management Consultant) in the same year.

The Mumbai-headquartered KyaZoonga, is India’s first nation-wide interactive entertainment-ticket aggregator that offers the masses a socially equipped networking
experience, it basically provides its consumers an easy access to all kinds of ticketed entertainment and sports with various payment options like online, retail, mobile, social and box-office. In other words, KyaZoonga is a portal that brings together all kinds of entertainment ticketing under one roof.

Over the span of time, the company has very quickly managed to grown and become a sensation internationally, also due to its proprietary technology that has delivered flawless service to most of the largest international sports and entertainment events in the Indian subcontinent and around the world. It is the only ticketing company from India which managed to qualify as a finalist for an Olympics ticketing bid. 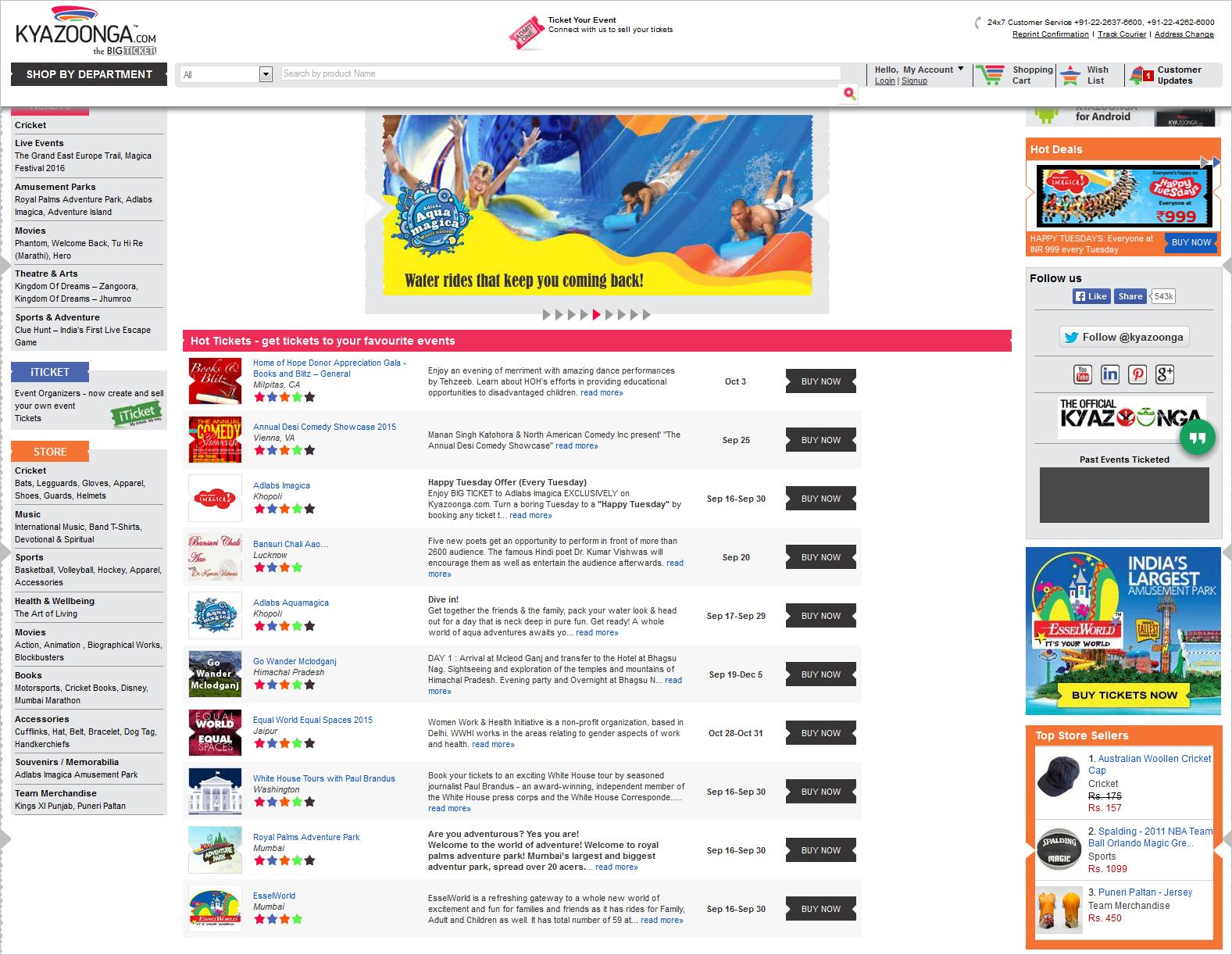 To add to that, KyaZoonga is also the only company from India which has ticketed a major international event – the ICC Cricket World Cup 2011, all forms of international cricket (ODI, Tests, T20s), several domestic cricket leagues and matches and Olympic style multiple sporting events and venues. Other than that, KyaZoonga also partners with some of the world’s leading sports franchises, concert promoters and event organizers as well.

KyaZoonga stands tall with a backing from an $18 billion New York based hedge fund which has several investments in many other e-media companies.

More recently, the company has signed a ₹100 crores ticketing deal with Caribbean Premiere League and has also rebranded itself from just a sports ticketing brand to a sports and entertainment online ticketing company. The company has also announced that some of the major international events tickets like EPL matches, Champions League, French Open Tennis, etc, have also been added to their inventory.

Now while at KyaZoonga, Akash had moved to Massachusetts Institute of Technology – Sloan School of Management to pursue his Masters in Business Administration in 2010.

During the same time, he was required a lot of user analytics back at home, to understand the user mindset to accordingly offer ticket pricing or even discounts and offers, he lacked the right source.

Data was required literally everywhere. As our daily lives were getting more dependent on technology, it was becoming even more important to have the right kind of analytics to understand your users well. Literally everything was analytics driven.

Yes there are many data analytical companies across the world, but their accuracy is not that great. That is what got his interest in data and the insights that it could provide, and thus began his brainstorming.

But it all became clicked when in 2011, Akash along with his future Co-founder – Purushotham Botla attended a class of Sir Tim Berners-Lee, the inventor of the World Wide Web at MIT.

Quickly, they built a prototype of the potential product they were anticipating – 360 degree View, in that class itself. And took the class project and made it their start-up.

Together, Akash and Purushotham had developed a tool that combined an individual’s data from social networking sites and would create a detailed profile of the customer which would include age, location, interests, places frequently visited, and even spending power.

And the beauty of their product was that, all of this could be made possible without breaking any privacy laws, and with a higher accuracy would also allow a company to identify, understand its user better and accordingly would be able to recommend products that would better appeal to the customer.

And that was it. Infinite Analytics was born in 2012! 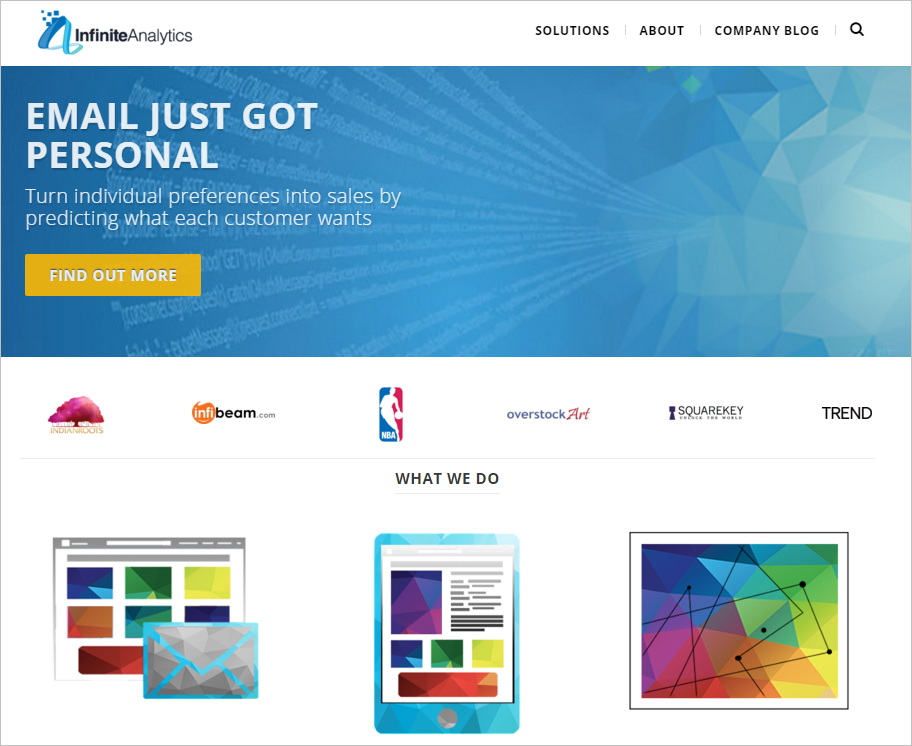 Now for a while they managed to function without funds, but soon they began to feel the crunch and after a period it started to become a necessity.

One day, just when the business management students were at MIT’s entrepreneurship centre and were discussing about how to raise capital for their newly formed start-up, there was a knock on their door asking for directions. And call it luck or mere coincidence, but it was venture capitalist and co-founder of Taipei Angels, Chester Ho.

Ho overheard their work and got curious to know more, after a lot of questioning about the business plan, he left by asking them to email him the pitch.

With a lot of excitement, they did so as well. A month went by, there was no reply, let alone capital in hand. But 45 days later, Ho replied back with a cheque for $90,000 from Taipei Angels. And that is how they got their first round of investment.

They like to call this instance as “A knock on the door changed their fortunes”!

Infinite Analytics – As It Is!

Infinite Analytics is a cloud-based big data company that with the help of its tools, predicts the consumer behaviour very accurately (higher than its competitors) which is primarily based on the information shared by users on their social networking sites.

It is becoming to be recognized as one of the most advanced Predictive Marketing and Analytics Company in the world. The company has created a real-time personalization platform that study’s all available data and forecasts by utilizing this data to match a customer to a product or service.

It develops a complete 360 degree view of every customer which is based a range of reliable factors like the user and catalog, structured and unstructured data from online, offline and macro-trends from the web, etc to give the clients the highly possible accuracy.

They tools they use consist of NLP, Machine Learning, Semantic Technologies and Predictive Analytics that helps them understand and predict a particular user’s behaviour.

The company holds some of the best clientele one could only dream of, which include – Salman Khan’s Being Human, Croma, FabIndia, Gitanjali Gifts, Harlequin, RoomStory, SquareKey, Zovi, etc and many more.

Sir Tim Berners-Lee – the inventor of the World Wide Web and Deb Roy – Chief Media Scientist at Twitter, act as advisors to the company.

Trivia: – Infinite analytics works on a ‘revenue sharing’ model, and takes a percentage of every sale that is converted through their model.

The Services They Offer

Every business vertical needs to personalize their offering to the individual customer, and we believe the Their tools are specially designed to offer personalized results, to avoid them the disadvantage. When a user signs into a portal using a Social Sign-in, they provide the retailer with some basic information of their social network. This information is more than enough for them to collect the public profile of the user from across all other social networks.

Even when users have different types of information across different platforms, this tool still very clearly and effectively, differentiates the right from the wrong on all other portals like LinkedIn, Google + and other social networks.

This also gives them a 360 degree view of the consumer including their likes, interests, activities, events attending and many other data.

Using these tools and Analytics, the company is then able to very accurately predict the Intent, Interests, Brand Affinity, Influence, Places and Venues, Media Habits, Brand Advocacy, Competition, and a lot more for the client.

Now as a part of Infinite Insights Service; based on the analysis that they do (as mentioned above), they get a 360 degree profile of the user, which they then provide to their clients along with accurate insights which is more particular to their end of the business is also given to them.

This greatly helps the businesses across to target the right kind of audience and manage inventory, optimize media buying, supply chain, and a lot more!

As very correctly explained by Akash himself, they have a range of key differentiators in analytical solutions as compared to others in the market –

Since their beginning, the company has grown to a 15 person team, with operations in the US and India. All their data scientists sit in the US, while a few of their team members are based in India for sales and implementation/infrastructure.

One of the challenges the company used to face was the difficulty of educating its potential clients or their decision-makers about analytics. And given the fact that, any techie who has heard about Hadoop starts to act as a big data analytics genius, certainly made it supremely difficult for Akash and his company to prove their authenticity.

But overcoming all such difficulties, the company has emerged as a superstar, and as Akash likes to put it – “He does not consider these as challenges anymore!”

The company has managed to make the masses understand what Big Data or Data Analytics mean and has also successfully created a reputation, which makes their clients love Infinite Analytics and their work.

Talking about their funding, most recently the company raised an undisclosed amount of funding from the Emeritus of Tata Sons – Ratan Tata, existing investor Nikhil Vora (founder and CEO of Sixth Sense Ventures) and many other new investors from Silicon Valley and India.