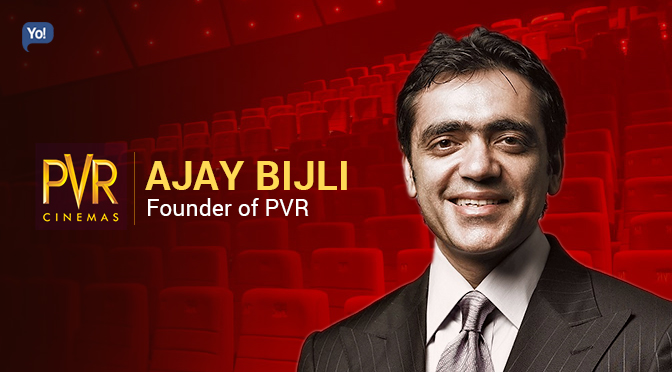 Born on the 9th of Feb 1967; Ajay Bijli at the age of 47 is the proud Founder, Chairman & Managing Director of PVR Group.

Being the pioneer to bring the multiplex concept in India; Ajay has successfully transformed the movie going experience for the masses and has done the same with sheer class and elegance. And today after almost 18 years; his PVR Cinemas hold the number one position with the largest chain of multiplexes in India.

Personally, Ajay comes from well-to-do family and has completed his Bachelors in Arts Honours from the Hindu College of Delhi, and along with that he has also pursued the Owner/President Management Program from Harvard Business School. He has three children; Niharika – who is studying business & film, Naina – who is studying economics & international relations, and his son Aamir is still in school.

Although he is known to be very shy and prefers to stay behind the scenes but at the same time he is also widely recognised for the panache he moves with. The fitness freak that he is, Ajay is seen to be at hitting the gym or playing cricket in his free time.

Even though Ajay hails from a business family; he still started his journey at a young age of 22 with his father’s transport business – ‘Amritsar Transport Co.’ in the year 1988!

Just like an obedient son; even though Ajay gave his 100% to the family business, but somehow he didn’t quite feel the passion about the whole idea. He could clearly sense that he was not meant for this; this business was his father’s grandfather’s dream but not his! But because he wasn’t sure what he really wanted to do, he preferred to stay mum.

It was when he got married in 1990 that he gathered courage and confronted his father and told him that, he wanted to do something of his own, something outside the lines of family business. But again, the question was what to do?

During the same time, Ajay came across his father’s Priya cinema (originally called Priya Love Vikas Cinema) in Delhi that his father had acquired in 1978!

Now even though, the property by then had lost its reputation because of which rival movie theatres were doing well, Ajay decided to try his hand at running Priya.

And since then, his love affair with the cinemas business began!

Now after studying his surrounding markets and its demographics; one of the first things that he did was that he started playing English movies in his theatre. Additionally, he somehow also managed to connect with some of the Hollywood studios as well. The only condition these Studios had was that they wanted him to refurbish Priya Cinemas before their movies could be screened there.

Inspired by Sterling Theatre of Mumbai, he decided to renovate his structure with installation of Dolby Sound Systems, adding a dash of pink colour to the grey interiors, got the toilets cleaned and lastly provided his staff with uniforms.

With much obviousness, this strategy worked well in his favour and after minute hiccups, Priya began to pick up. What added icing to the cake was that, during the same time, Indian government also partially decontrolled the ticket prices.

His business began to do really well, but in 1992, the Bijli family was hit by a shock, when Ajay lost his father that year. The work pressure on Ajay also increased drastically as he now had to look after both the businesses, simultaneously.

His daily routine became so tied up that, through the day he used to take care of the transport business and in the evening he used to come to Priya.

But misfortune struck again, and their well established transport business was put down to ashes, due to a devastating fire that took place. The Bijli family was left shattered again, both financially and otherwise.

Ajay was left at a tight spot where he had to decide his future course of life. He spoke to his mother about it; he told her that he had seen multiplexes abroad and wanted to do similar things in India.

He was certain that the Indian market was ready for the multiplex model and if such a concept was made available here then they would be able to release several movies at the same time and bring in the new movies earlier as well.

At the same time; Priya had also become a hub around the area, and had also led other retail outlets like McDonald’s, Nirula’s, Archies, etc to come up around it, which had got him even more excited and sure about his idea. But the only major problem he faced was that he didn’t have any clue how to go about it?

While doing his bit of R&D; one of the Hollywood distributors told him to get in touch with Australian media major “Village Roadshow”, which was keen to get into India at the time.

Without wasting any time, he met John Crawford –Managing Director of Village Roadshow, Asia in Singapore. And after a brief moment of some number-crunching (on a napkin-type paper), they agreed to a 60:40 joint venture, with 60% share vesting under Priya. And a new joint venture with the name of – “Priya Village Roadshow” (a.k.a. PVR) was formed!

Now to be able to go ahead; he had to counter his own set of new challenges! First a huge uncertainty which surrounded the whole idea was whether Indian audiences, who had gotten used to the massive 1000-seater cinema concept, would react to the smaller screens. But then again, that was a question that only time could answer!

Apart from that; his new Australian partners were keen on starting their first venture at Priya itself but Ajay didn’t want that to happen, hence, after a desperate search he was offered Anupam cinema at Saket, by the Ansals on a lease. And within no time in 1997; with four screens India’s first ever multiplex was born at PVR Anupam! 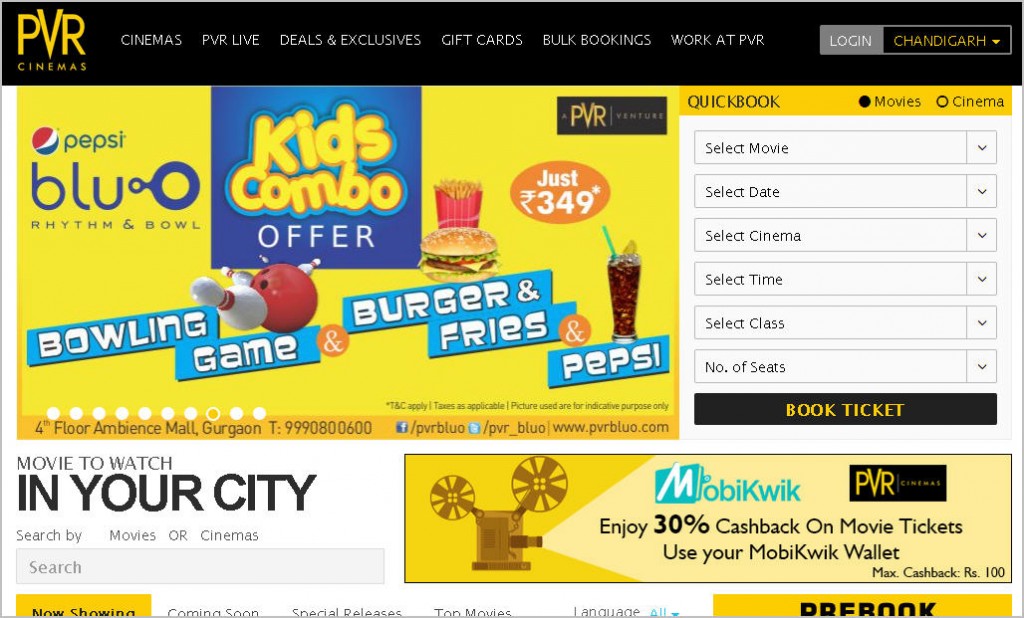 Their efforts were proved worth when the gates to PVR Anupam were opened. There were unending queues! They also began a campaign which was direct to the point: “four cinemas under one roof, 24 shows a day, multiple cinema complex”.

This encouraged them and led them to find more locations around Delhi and thus the expansion began.

Now during the 70s and the 80s, movies were just about creating one-size-fits-all films that could fill 1,000-seater theatres with filthy stinking loos, stale samosa’s, torn seats, etc. But in 1998, films got an industry status.

And by 2000, the company had grown by totalling upto 12 screens under their kitty.

The year of 2001 also began with a bang when the government announced a 5-year tax holiday for multiplexes and with such huge developments, the film industry grew over eight times in revenue and the average ticket prices across the country also doubled.

Now just when they began to get excited, things took a drastic turn and the 9/11 attacks happened. It changed the global business environment forever. Due to this incident, Village Roadshow didn’t want to expand any further and decided to exit India.

This even though was a huge shock to the company but it turned out to be a blessing in disguise for them! Wondering how? Let’s explain that to you!

Now during that phase; while Village Roadshow had demanded an exit, more than Rs. 100 crore worth projects, had been committed by the company and were signed up with a number of malls which were still under construction at that time.

Because most of these projects were still pieces of land, and he had no partner, he was left in a fix and at the same time he also had to fund the Village Roadshow exit too by buying out the 40 percent stake from them. There seemed to be no way out for them!

It was then, that he decided to consult his friend and mentor Sunil Mittal of Bharti Airtel who advised him to speak to private equity players.

Luckily, he got a chance to meet ‘Renuka Ramnath of ICICI Venture’ who agreed to chip in Rs. 40 crores in their company and matching equity with debt, they in totality raised about Rs.80 crores and with that they were back in business.

PVR began making space for them in the new environment, and soon new projects began opening up.

In 2006, PVR came out with an ‘Initial Public Offering’ and ICICI Venture part-exited at a great multiple, along with that PVR also got in Rs. 250crores into the company.

This was then followed by an aggressive expansion plan which included an addition of more than 120 screens and a much greater recognition and acceptability for the PVR brand nationally.

At the same time, the big boys of the corporate world had understood the potential of the Multiplex market and had began entering the arena, giving competition to Ajay’s PVR. Some of PVR’s deep-pocketed competitors included Anil Ambani’s Big Cinemas, INOX, and then later Fame, Cinemax, and so on…

In an attempt to rise-up to the competition, Ajay decided to grow from just an exhibitor and began the transition to become a Hollywood style-Studio.

Ironically, this transformation worked well in his favour and his movie arm – PVR Pictures, went on to produce some of the biggest hits of their times including Aamir Khan starrer – Taare Zameen Par, Jaane Tu Ya Jaane Na, Ghajini, Golmaal Returns, All The Best, Don, Sarkar Raj, Omkara, etc.

They even raised more equity for their movie’s wing from J.P. Morgan and ICICI Venture. But turns out that eventually, this was nothing but beginners luck and following the initial successes, PVR Pictures gave some of the most disastrous flops of its times. Due to such a bad fall, PVR was again pushed back several notches and almost INR 30 crores were wiped out from their profits. The only thing saved them was their Theatre-wing!

Anyways, as they gradually began to balance out the losses another opportunity presented itself in 2012. Kanakias, who owned Cinemax, wanted to exit out and were looking for a good deal. Clearly, a golden opportunity that it was, was grabbed by PVR after a brief thought and backing from – L Capital and Renuka Ramnath’s Multiples Alternate Asset Management. The acquisition took place for a total of Rs. 543 crores!

This turned out to be a game changer for PVR!

Since then PVR Cinemas has not only transformed into becoming the largest cinema chain in India but has also transformed its PVR Pictures into the largest independent distributor for Hollywood in India.

Today the group which is valued at more than Rs. 1,350 crores and serves over 60 million patrons at PAN India level is listed amongst the top 10 cinema companies in the world. In total, PVR currently has 471 screens in 106 properties in 44 cities and is also in plans to reach 500 screens by 2015.