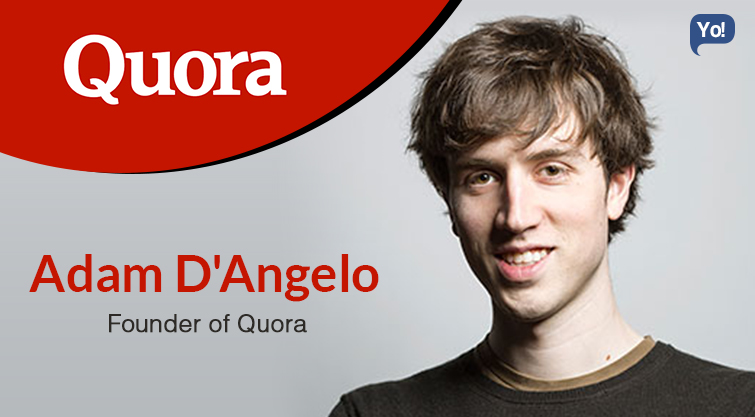 He had been awarded with a silver medal in the International Olympiad in Informatics in 2002, and is also a runner-up in ‘Smartest people in tech’ article by Fortune Magazine.

Adam had attended the ‘Phillips Exeter Academy’ for his high school in 2000, along with Mark Zuckerberg, and later also went on to complete his Bachelors in Computer Science from the California Institute of Technology (Caltech) between 2002-06.

During his time at the Phillip Exeter Academy, Adam and Mark instantly clicked and became friends, because both were late arrivals, transferring to the school in the 11th grade.

Together, they had also developed a music suggestion software (that suggested music according to your taste) known as ‘Synapse Media Player’. Synapse eventually became a huge success and got acquired by Microsoft.

Post this stint, Adam moved to Caltech to pursue his further studies, where he also created the website ‘BuddyZoo’. It allowed users to upload their AIM buddy list and compare them with those of other users.

He had also put his studies on hold for a while, to spend a semester helping Mark during the early days of Facebook.

And after completing his education, Adam decided to join Mark Zuckerberg’s initial team that formed The Facebook as VP (Engineering).

One thing that he learned from Facebook and Mark was that – “Execution was far more important than an idea.”

With that thought in mind, he retired from Facebook as their CTO in 2008, and went on to create Quora!

Simply put – Quora is a question-and-answer website where users ask questions, answer them, and edit and organize them.

It was Co-founded by former Facebook employees – Adam D’Angelo and Charlie Cheever in June 2009, and was made available to the public on June 2010.

The beauty of Quora is its authenticity! It is a platform, for sharing knowledge, as opposed to information, where one can expect some really genuine answers, with facts and proofs.

So for instance, if you ask a question pointing out to Jimmy Wales (Founder of Wikipedia), you can expect the real Jimmy Wales to actually come and answer your question!

Even though, Quora is similar to the likes of Facebook, Twitter, Wikipedia, Yahoo Answers, Answers.com, yet works differently. Real names are mandatory, and you need to login using either your Facebook or Google account, or create an account there. You can follow topics, questions and people, and accordingly their activity will show on your feed. You can Upvote or Downvote an answer, or even comment on one, if you want to.

With a fairly simple and self-explanatory design, you can begin using Quora by scrolling through the random questions on the home screen a.k.a. ‘Read’. On this screen you will be shown all the most popular questions under the topics that you choose to follow.

Then there is also the ‘Answer’ tab, next to Read, which displays the questions that need answers or the ones you have been asked to answer by someone. Next to that, will be the ‘Notifications’ tab and finally ‘More’ tab where you would find your profile details, messages, your reading list, your content, stats, settings, etc… Lastly, up on top you would also find the big search bar, wherein, you can search for questions using relevant keywords.

In our 20’s, when most of us are trying to figure out our life, Adam came up with a site that had the answers to literally everything.

At first, Quora’s business model doesn’t sound like anything special. It’s just another Q&A site, similar to the likes of Yahoo Answers, Aardvark, Answers.com, Reddit, etc… but in reality, Quora for many reasons, stands out with its contributors, major one being – the people who answer these questions on the site.

Some of these are the brightest in their fields of expertise, professionals of reputed organisations, and many of whom are very well-known in the world as well. And mind you, these biggies aren’t just on strolling on the site, they are power users! These also include executives from the hottest start-ups and tech giants.

Even after the Web has become so big, there still remains a huge gap. There’s a lot of information that has been in peoples’ heads, and not even a minimum has been shared on the Internet. A vast amount of knowledge that would be valuable to many people, is currently only available to a few.

Additionally, since today, we live in an age of 140 characters; most of the conversations now take place in short. Thus, killing the details! 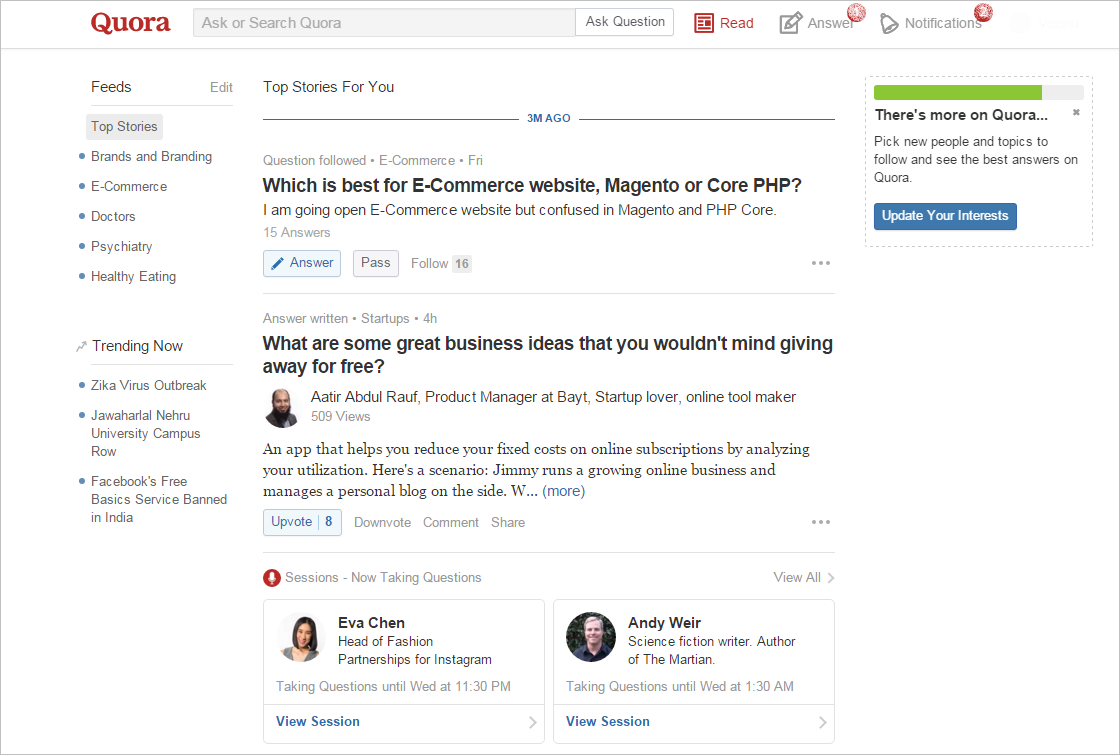 Quora, by contrast, has come in with a fresh wave of relief for the ones who prefer details, and encourage answers that are thorough and in-depth. Quora attempts to fill the gap, as a general place for people to share knowledge of all kinds. It is a medium which connects the people who have knowledge, to the people who need it.

On other sites, people tend to value the funniest answers, but on Quora, it’s the other way round, your answers need to be thorough, honest, intelligent and wise, in order to be appreciated.

TRIVIA: – Mark Zuckerberg had acquired ‘Nextstop’, after being suggested on Quora. He had put up a question asking – “What start-ups would be good talent acquisitions for Facebook?”

It comes as a business model, which is learning module, but from each other. It brings together people from different worlds to answer the same question, and has only one version of each question – no left wing, right wing, western, or eastern versions, to a question!

Quora’s goal is to capture as much of that subjective knowledge as possible, and there is literally no place where you can find or put all this wisdom you accumulate in your life.

The basic concept of Quora was born when one day Adam and Charlie were having Chinese food near Facebook’s offices. They were discussing about “latent (hidden) markets”, and areas of the internet which had a consumer demand but there were barely any solutions.

After brief research, the biggest example, they found were the sites that were devoted to answering questions. They figured that a large part of Internet searches were framed as questions, and Yahoo Answers itself attracted more than 50 Mn users in the US every month.

But due to the silliness of the answers and guessed answers with absolutely no knowledge of the subject, only few searchers were able to justify the questions, while most of the searches went unanswered.

Furthermore, their research pointed out that about 90% of the information people have was still in their heads and not on the web. They saw that, the Q&A format had an equal amount of opportunity, and was just as ripe as the one that had made Facebook a billion-dollar business.

This was the problem they were attempting to solve, and this was the market segment they were targeting at. They wanted to create a platform, a knowledge base which would be created, managed, organized and edited by the users itself.

Quora’s hidden business strategy is to connect with a big idea on the rise in culture – our avid desire for the truth! It has successfully managed to capitalise on the rise, and has created a community of truth junkies.

And to help us even more, it has given us tools, to self-manage that, and has also imbibed a built-in feature to spread the word, through the use of the ever-growing social media.

The idea is to give the masses a naturally built-in marketing platform, along with a solid social media platform, and then it presents questions in a way that can although, describes an individual’s point of view, but also opens it up for a debate.

The eagerness to gain more knowledge, truth and information; brutally traps a person inside the platform! 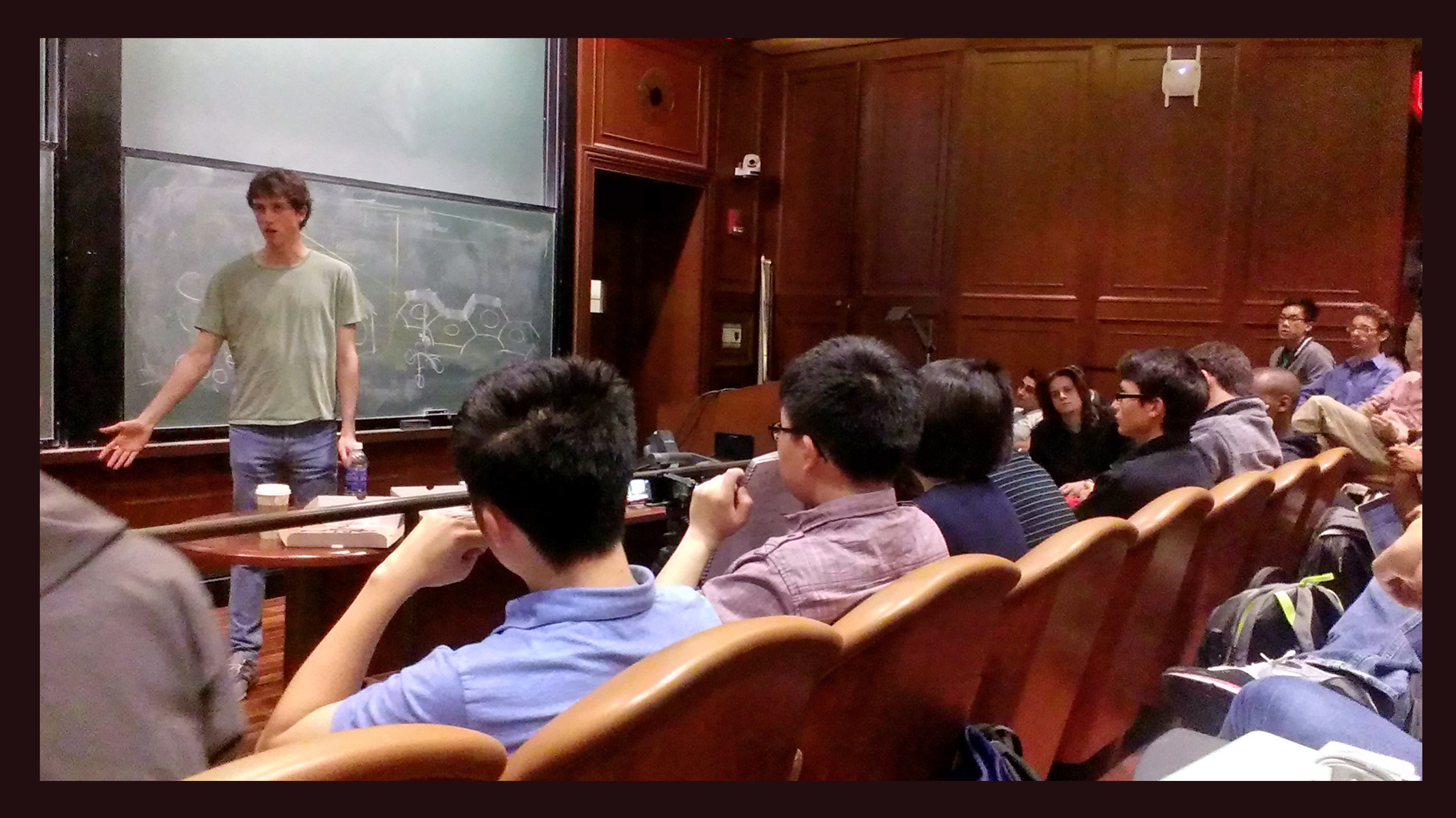 Now, Quora has no marketing strategies and doesn’t require one too! Their business model and strategies are such that, they are heavily used as references for research purposes, or by media and other brands and in many other ways; thus helping in spreading the word.

So the question is – How are they really benefiting from Quora?

If you are looking to build up your professional brand in your industry, one of the best ways is to simply answer people’s questions. And Quora is a great place to start.

The better the answers, the more the followers – your brand value increases!

Let me give you a few reasons how can Quora be of great help:

After resigning from Facebook, Adam felt that he was in a good position to start a company, and immediately started working on a project they earlier called – ‘Alma Networks’ (named after the street in Palo Alto where Charlie lived). Soon, they also hired Rebekah Cox (a top designer at Facebook) and Kevin Der (an engineer), and began building their online service.

Within a few months after the site was ready, they decided to release the private beta for testing amongst friends and friends of friends through invitations. It was called Quora!

In no time, the site was creating a buzz in the Silicon Valley and these friends of theirs, had begun inviting their friends and so on… Quora’s user base was growing very quickly and with a decent amount of valuable content, they had an estimated 500,000 registered users by January 2011. At this point, Quora had just 18 employees.

By the mid of 2011, in order to make information discovery and navigation easier, Quora decided to redesign its website, and also released an official Android and iPhone app as well.

In the same year, Quora also introduced new features like – Video, Credits for asking-to-answer questions, and threaded comments and comment voting to its Q&A pages.

In 2012, Charlie stepped down from a day-to-day role at the company, while continuing to retain an advisory role. Other than that, what was even more interesting was that, Adam believed in his idea so much that, he invested $50 Mn of his own money in the Series B round of funding of the company, and acquired sufficient control over the company to have things his way.

The year of 2013 saw many new developments which included – introduction of a blogging platform on Quora, launch of full text search of questions and answers on all devices, Stats (to allow all users to see summary and detailed statistics), etc

The company had now reached to point where it had become home to more than 16 million answers on 400,000 topics, and had over 1.5 million unique monthly visitors at a growth rate of 300% across all user metrics.

Recently, they had also participated in ‘YCombinator’s batch of Summer 2014’, and also become the oldest company to do so. 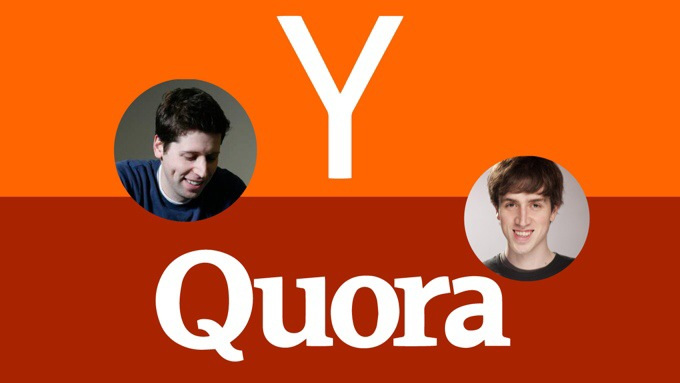 Over the period of time, Quora with its team of 130 employees, has quietly grown into a huge community of 80 million monthly unique visitors, 50% of which are from the United States and 15 % are from India.

So far, they have raised a total of more than $141 Mn from 11 Investors, with their last round being of $80 Mn from Tiger Global at a valuation of around $900 Mn. They are currently valued at more than $1 Billion. Lastly and more recently, Quora has also made an undisclosed amount of investment in Hike Messenger in Jan 2016.