What do you do when you want to order food from outside? You search for the menu or menus, choose your restaurant then choose what you like and order, right? These were the times when we had to get out of our houses in search for the perfect eatery, with a hope to find solutions to all our doubts. Yeah, well times have changed; we now have a directory similar to a telephone directory, but only to be far more advanced than it called “Zomato.com”.

‘Zomato’ is that place through which you end up gaining a lot of weight…and no it’s not a gym offering a special weight-gain program! It’s like a ‘one stop solution’ to all your cravings for food, alcohol, pubs, etc., or in other words, an online temple where you end up going every now-n-then but for one major selfish reason called “food”.

But Zomato was not always hyped, famous or for that matter Zomato itself! It was initially called “Foodiebay.com”. It was like a word document put up on the internet to simplify the restaurant or menu search for friends and colleagues.

This small gesture for friends by Deepinder Goyal & Pankaj Chaddah (Co-founders of Zomato.com) gave birth to a successful story of two unknown boys who began their journey with an unnoticeable viewer base of a few friends and colleagues and a list of 1,200 restaurants around Delhi NCR in their kitty that managed to go on to make a presence in 106 cities across 13 countries with an approximate user base of 62.5 million and a base of 255,700 restaurants on their portal.

But like every other success story, their story was also majorly divided into three sections “BASE”, “GROWTH” & “THE ULTIMATE SUCCESS”!

A new era began when Foodiebay.com was launched in July 2008. Looking at their reason to begin, neither of the co-founders had any intention of expanding it or gaining anything out of it. But with the sudden growth in popularity in the State, by the end of the year, they were forced to add-in more restaurants to the list making it a compilation of 2000 outlets and soon managed to expand to cities like Kolkata and Mumbai in 2009 followed by Bangalore and Pune in 2010.

Now for two initial years they managed to run the website without any investment or professional team. To add on to that, being less renowned to the masses, they found it very difficult to get details of restaurants or other eateries as well.

They now felt the need for funds and expertise for which they reached out to the potential investors. This is when they got in touch with “Info Edge” who turned out to be a god-sent angel for them. In August 2010, Info Edge (India), the parent company of Naukri.com group, made the first-ever investment in the company valued USD $1 million

This gave a boost to the morale and confidence of our Super Hero’s and in November they changed the name from Foodiebay.com to Zomato.com keeping in mind their future plans to move outside the food genre and also to avoid possible conflict with eBay as Foodi”ebay” name had “eBay” in it.

With an increasing demand from everywhere, it was evident that it was now time for Zomato to grow and increase their reach and resources. It was time for the company to generate some income too, so they first got a revenue model in place. The revenue model developed and followed till date has the following attributes to it: 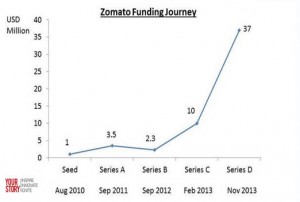 Within a year of the first investment, Zomato was able to manage another investment of USD $ 3.5 Million from Info Edge to for resource expansion and investment in refining technology.

They used this investment to make and launch applications for iOS, Android, Windows Phone and BlackBerry devices. Followed by that, they also covered other cities like Chennai, Hyderabad and Ahmedabad.

They also launched an events section on Zomato.com in 2011 but got it shut down soon after it started because it overlapped its announcement of second round of funding.

With these rounds of investments, Zomato first launched a Magazine of the content of the website in collaboration with Citibank, named “Citibank Zomato Restaurant Guide” followed by its first ever overseas expansion in countries including Dubai, UAE, Sri Lanka, Qatar, United Kingdom, the Philippines, South Africa in 2012 and then Auckland, Wellington and Hamilton in New Zealand in the year 2013. Zomato was everywhere by now. 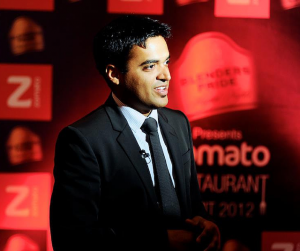 But during all this glam-sham’ed hype and the fund raising Zomato was also facing a huge crunch when it came to generating profits. Zomato Media Pvt. Ltd., the actual owner of the website, reported a loss of INR 7.22 crores in FY2011-12 when the revenue was just INR 2.04 crores followed by a loss of INR 10.03 crores with revenue being INR 11.38 crores in the FY2012-13.

Now in the FY2013-14, Zomato again booked a loss of INR 41.28 crores but at the same time managed to generate revenue of INR 30.06 crores. This gave rise to a fund raiser worth a whooping USD $37 million from Sequoia Capital and Info Edge collectively. With this round of investment, Info Edge (India) Ltd. now holds a 50.1% shareholding in the company.

“With ultimate growth comes ultimate success. It is evident that the company is making losses but it is also important to note that in the initial stages most of the companies go through losses because they are at a stage where they are more concerned about generating strong, loyal and reliable customer base. Such companies with such huge financial backing focus firmly on strengthening the base of the company and making sure the company’s reach is not limited to any boundaries. And the stats below point at the same thing:

Now it is obvious that the company has yet not attained its success but looking at all these factors it becomes certain that the company is on its way to ultimate success and when we will look at them a few years down the line, there definitely will not be a doubt about it in our minds.