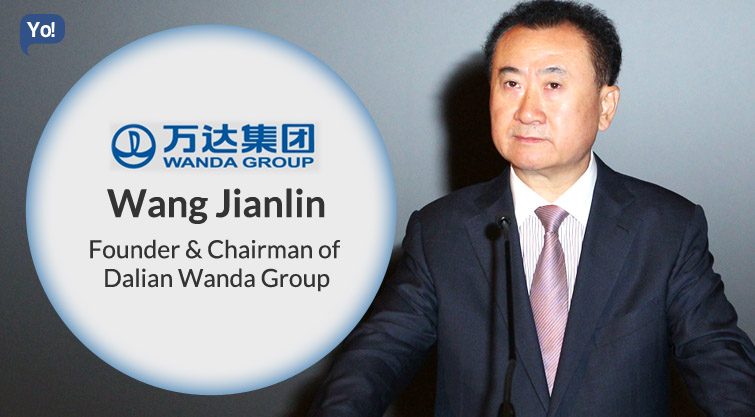 Who is Wang Jianlin?

“Never start a business just to make money. Start a business to make difference”. This is a quote that best applies to the “The Wealthiest person in China” – Wang Jianlin!

Born on the 24th of October 1954 – Wang is a Chinese businessman and philanthropist, and the chairman of the Dalian Wanda Group (Largest real estate developer in China and the world’s largest movie theater operator).

How the son of a foot soldier in Mao Zedong’s Communist Revolution grew into the top tier of the global elite – is a classic story which, goes without saying, is equally remarkable, as his accomplishments are!

Wang Jianlin is someone – Prime ministers send thank-you notes to, and Hollywood’s biggest stars fly to China for, when he summons. He was one of the very rare few, who was a part of the Business community to meet President Obama, when he had come down in attempts to woo foreign investors.

Despite his age, he has a “trim figure” and is someone who enforces “iron discipline” in the workplace, where employees are fined when they violate the company’s conservative dress code.

As of date, he has reached to a point where he now holds a personal net worth of $33.3 billion, but during his whole journey, he had never started business with a motive of earning quick money. The real estate honcho was more interested in its prolonged existence.

Talking about his personal life – he is the eldest of all five brothers and is married to Lin Ning, and has a son named Wang Sicong. Wang Sicong is currently a board member of the Wanda Group and a venture capitalist in China through his Beijing-based private equity fund, Prometheus Capital. Wang Jianlin owns houses in three cities of China (Beijing, Chengdu and Dalian), a 10-bedroom, eight-bathroom mansion in south-west London, etc…

He is also known for his fascination for Art Collection, and owns an extensive collection of Chinese art and jade, such as Picasso’s Claude et Paloma ($28.2 Mn), Monet ($20.4 Mn).

Over the period of time – there have also been various accolades awarded to him. Some of these include: -

What was his life before he became a billionaire?

The beginnings of this visionary were very humble!

Born the eldest of five brothers in Sichuan province, Mr Wang was the son of a Red Army hero and was a part of Mao Zedong’s Communist Revolution. Being born to a family with a strong military background, he chose to be a soldier and his father helped him by pulling the strings, at the tender age of 15.

He joined the People’s Liberation Army and served them for 16 years, initially as a border guard and eventually rose to become regimental commander. But in the mid 80s, the Chinese army was slimmed down and Wang was among the million who were decommissioned.

After sixteen years in the People’s Liberation Army, Wang then moved on to work as the Office Administrator for the Xigang District in the city of Dalian in 1986. But obviously, the life of a government official was also not for him.

Therefore, Wang left the job in 1988, moved to his mother-in-law’s house, and then took a job at a debt-ridden property developer Xigang Residential Development Company of a General Manager, in 1989.

By 1992, he took control of the debt-ridden property developer and changed its name to Dalian Wanda. Wang Jianlin started Dalian Wanda Group with borrowed $80,000.

Since then, there has been no stopping him!

To begin with – the company was run with military rigour, where Wang made a decision and employees carried it out. If they failed to do so immediately, they needed to pay a fine.

In China, it’s not easy for a private company, to be successful and grow. China is a government-oriented economy. It is literally not possible for a business to run entirely without government connections.

Hence, he began by scouting for property deals and got into arrangements with the local government officials by promising that he could complete the given projects remarkably and rapidly, so that officials could reap the political dividends before the promotion cycle took them onwards.

Anyway, under Wang’s leadership the company quickly expanded beyond its initial focus on residential development in and around Dalian, to developing projects at Chengdu and Changchun.

He was so good with his execution that local officials had begun coming to him to various sorts of projects in their cities.

Over the period of time, the company has gone on to diversify their portfolio in several sectors. Since then, Wanda Group has made forays into “alternative, income-generating businesses away from the property market”, and it has also been the most aggressive in pursuing this strategy as well.

They have done so by way of acquisitions. Some of these include: -

In 2012, they acquired US-based AMC Theaters for $2.6 billion, and became the world’s largest theatre owner. It was then listed on the New York Stock Exchange.

In September 2013, Wanda Group not only announced their plan to build the world’s largest studio pavilion at Oriental Movie Metropolis that would include a 10,000 square meter studio and an underwater stage, but also flew in celebrities Leonardo DiCaprio, Kate Beckinsale, and John Travolta to help launch an $8 billion mini-Hollywood in the coastal city of Qingdao in the same year.

In the next year, Wanda group acquired a land at Beverly Hills (California) to build their American headquarters. In the same year, he also acquired the landmark “Edificio España” building in Madrid (Spain) along with billion-dollar hotel development projects in London and New York, as well as property projects in India.

In December 2014, the group’s property division – Dalian Wanda Commercial Properties, launched on the Hong Kong Stock Exchange, and made the founder Wang Jianlin worth more than $25 billion, and one of China’s richest men.

In the beginning of 2015, Wanda group also purchased a 20% stake in the Spanish football club called Atletico Madrid for €45 Mn as well.

They now had billion dollar investments in properties in Sydney, London, Chicago and Los Angeles, and was also on his way to becoming the world’s biggest owner of five-star hotels.

Talking about the future – by 2020, Wanda aims to transform into a leading MNC that holds assets worth 1 trillion Yuan, and annual Revenues worth 600 Bn Yuan. Wang also wants Wanda to become an international brand, at par with the likes of Microsoft, Apple, and Wal-Mart.

As we mentioned earlier – it is nearly impossible to succeed in China without government connections.

Wang too has his network within the government as well! As a matter of fact, relatives of some of the most powerful politicians and their business associates own major stakes in his company.

Among those given an early chance to buy a stake in his company was Qi Qiaoqiao, elder sister of China’s current president, Xi Jinping, business partner of the daughter of former Prime Minister Wen Jiabao, Jia Qinglin and Wang Zhaoguo (relatives of two other members of the ruling Politburo at the time), and several such other names…

Together, their stakes in Wang Jianlin’s real estate division, were valued somewhere close to $1.1 billion during the time of its IPO, $17.2 million in its cinema subsidiary when it listed separately, and lastly, their holdings in both companies are worth more than $1.5 billion now.

Government records filed disclosed several such investments that were made from 2007 to 2011. This was during the time when Wanda was privately held and rarely sold shares to outsiders.

Having said that – there has been no indication of any of the politicians, their relatives or / and business associates that owned shares in Wanda being involved on the company’s behalf in any of its dealings with the government, or have benefited in any other such way.

In fact, Mr Wang has publically stated that, since China’s economy is government-led, and the real estate industry depends on approvals, you can really ignore the government; hence, yes he does stays close to the government, but distant from politics.

The government has recently relaxed foreign direct investment (FDI) norms in the construction sector, making it lucrative for several foreign players to turn their eye here.

Hence, announcing the first significant investment by a Chinese company, Dalian Wanda Group – China’s top real estate player, plans to invest $10 billion in India in the next decade in the construction of industrial townships and retail properties.

He spoke to our PM Narendra Modi and expressed his intent to explore business opportunities in India at a meeting in New Delhi.

Additionally, in meetings with officials from the Department of Industrial Policy & Promotion, the Ministry of External Affairs and state governments, Wang further went on to inquire about the incentives that will be offered by states, the land acquisition process, and also sought information on policies for commercial development and retail construction in Delhi, Haryana, Andhra Pradesh, Gujarat and Maharashtra.

They are looking at building urban complexes, shopping malls and theme parks along with five industrial parks in India.

As a matter of fact – the Dalian Wanda Group, has already initiated talks with Indian multiplex owners to acquire assets to enter the Indian market. This includes the listed ones such as PVR Ltd and Carnival Cinemas Ltd, as well. They have also started due diligence on PVR’s books as a prelude to make a formal offer to acquire the company too.