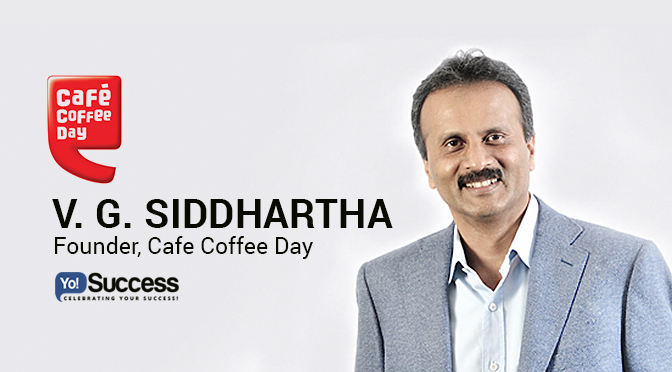 Been to Cafe Coffee Day, now know their Story!

V. G. Siddhartha – a man less famous by his name but whose work screams volumes, is the proud Founder & Owner of Cafe Coffee Day. He was born into a family of coffee plantation owners from the Chikmangaluru district of Karnataka, who today, have been in the industry for more than 140 years.

He is a Master’s in economics from the Mangalore University of Karnataka and has two children from his wife Malavika Krishna – the daughter of S. M. Krishna, former Chief Minister of Karnataka, Indian Minister for External Affairs and Governor of Maharashtra.

Siddhartha always had the quality similar to that of a naturally born entrepreneur and to top that, he also had a mysterious ability to sniff out a good deal from every situation, too! Professionally, a restless and an extremely quick decision maker that he is, is a diehard workaholic and prefers to stay put for nothing less than 12-14 hours a day and 7 days a week.

And a collective combination of all of that; is a sum up of his business empire that bestrides retail (Café Coffee Day), financial services (Way2Wealth Securities), venture capital, hospitality, furniture, logistics (SICAL), and land development. Additionally, today Siddhartha holds a net worth of $1.09 Billion.

Siddhartha’s career started soon after he completed his studies!

Now, he could have easily survived off the 350 acres of coffee estate his family owned, but instead – the ambitious him, decided to start something that appealed to him, something created by him, something on his own! Agreeing to that; his father gave him Rs.5 lakhs and also told him that in case if he failed, he is always welcome to come back to the family business.

So with that money, he first bought a piece of land for about Rs. 3 lakhs and kept the rest in a bank.

Later, he landed in Bombay – the city where dreams came true, in and firstly, walked into a Dhaba Hotel and rented a room with a shared toilet for Rs. 120/day at fort. And he was doing all this when he was just 21!

The next day; Siddhartha – who had never seen elevators in his life, climbed up the six floors, just randomly walked into Mahendra Kampani of JM Financial’s office and that too without any appointment.

After a short wait and a healthy discussion, he got the lifetime opportunity to join Mr. Naveen Bhai Kampani J M Financial Services (now J M Morgan Stanley) in Mumbai as a management trainee/intern for trading in the Indian Stock Market.

During this whole phase, he learnt all about the world of investing and also gained the trust of Kampani. And in no time, Siddhartha was handling the accounts of some really big business houses.

Kampani personally trained him to understand the importance of those tiny pieces of gold on the surface and to grab them first, before diving head first in the stream. It was because of these wise words of Kampani, Siddhartha began buying his own coffee estates, by trading out the little pieces of gold he grabbed from the then upward trending stock market (if you know what we mean).

Now even though the job didn’t require him to do much, but being directly under the mind of the company, gained him the knowledge that was simply priceless and in fact, even today he considers himself lucky to get such kind of opportunity and for the valuable advices that he received.

After working with JM for almost two years, Siddhartha felt that he was ready to come back to start something of his own. He expressed his gratitude to Kampani and that he owes a lot to him and soon came back to achieve what he desired the most – business!

After two years Siddhartha moved back to Bangalore and with the remaining Rs. 2 lakhs decided to start his own financial firm. During that time, the stock market had crashed & he was looking around for a new investment opportunity that would gain him good returns and thus began Sivan Securities. At first, he bought a stock market card for Rs. 30,000, and then along with that, he also took over a company called Sivan Securities which later went on to be known as Way2wealth Securities Ltd in 2000.

And Siddhartha successfully transformed the venture into a highly successful investment banking and stock broking company. 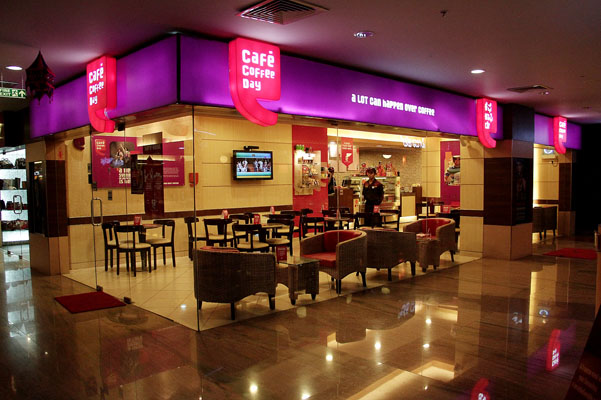 Later, after a period of 10 years; Siddhartha happened come across a German business owner, who was interested in buying coffee beans from him for his “leading coffee brand in Germany – Tchibo”.

During that brief discussion with the owner of Tchibo, he happened to spell out his story of how his brand had actually started in a small 10 ft. shop in Hamburg, Germany with a bare minimal investment, and how within a span of nearly 40 years, it had turned into a globally renowned Multi-Million Dollar business & the second largest coffee roaster in Europe.

This inspiring tale of the Tchibo, gave Siddhartha an outlook of a different world altogether & opened his eyes. It also gave him a wonderful idea, with the help of which, cup by cup he built his Billion-Dollar empire.

At first; cutting the middleman trend, he quickly started with exporting coffee in 1993, and named it “Amalgamated Bean Coffee” trading company and at the same time also bought a near-to-dying coffee curing unit in Hassan and turned it around.

Gradually, his company grew and within a span of just two years ‘ABC’ was India’s largest Coffee exporter.

Having done that; this success also began to scare him, simply because if he could do it then any international player would also be able to do it very easily, and the barrier to entry was absolutely nothing.

The visionary that he was; for a fact knew that, whenever the investment climate in India would improve, these big-fat European and US trade houses that he dealt with, would come running and would quickly put up big factories next to theirs, giving a big threat to him.

This forced him to look for a long-term survival and dominance in the industry! He thought that building up a brand which had Ground outlets would actually create an undisolvable business model and would make his idea less prone to external threats.

Now at the same time back in the 20th century, South Indians were more driven towards filtered coffee than the rest, and coffee was mainly popular amongst the classes than the masses of Bangalore.

To add to that; the Government policies & the soaring high import and export duties made it even more difficult for Indian Coffee Planters, to keep low prices or to venture out into the International coffee cartel.

Hence, he picked up the task with an aim to change the present scenario!

Siddhartha headed to New Delhi, to convince the union government to end their monopoly over coffee, and returned back with nothing but success. And in a snap, the highly inflated taxes on coffee trade were drastically cut down.

Soon after that; he asked a girl who worked at his office to do some deep market research on the possibilities and opportunities were available to set up stores to sell branded coffee powder.

She studied the market and came back with results after a week. And clearly her result indicated that, she didn’t want him to waste his time and money, because the idea had no potential!

Having an internal target of 500 tonnes, this feedback was indeed scary for him, and also because everything of his was at stake, but nevertheless he decided to take the leap and go ahead with it!

But soon after the start itself, he realised that margins were very limited in this business and that he would need a better option to survive. That is when luck played its part and in 1995, the café culture globally, picked up and he decided to transform!

It was just the perfect opportunity for him! It was a lifestyle business and a great way to build a brand.

He called in his management team and told them that he wanted to put up cafés across India. Within a budget of Rs.1.5 Cr; he told them to build a nice concept store and to attract audiences to his cafe and pay Rs.25 for a cup (at a time when people paid Rs.5), he decided to make it a Cyber Cafe with Coffee and Internet together.

This idea was even more bankable because, those days the Internet was still a luxury product limited only to the riches, posh places and cafes.

And today, “Amalgamated Bean Coffee” trading company (ABC) grows its own coffee in its own estates of 12,000 acres. It is also the largest producer of Arabica beans in Asia and also exports the same to various countries like USA, Europe and Japan.

Other ventures that he is a part of!