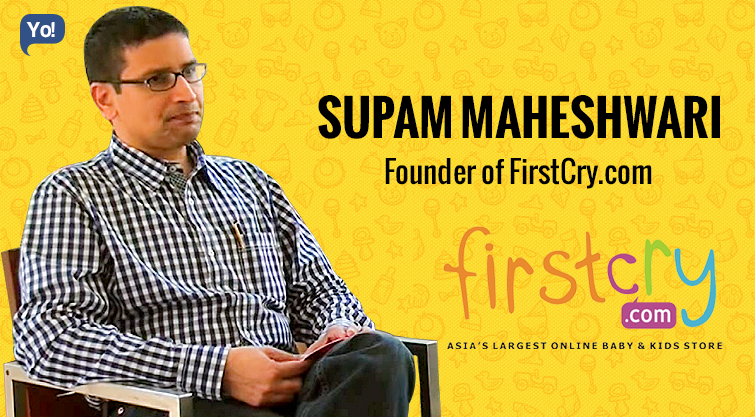 Before moving towards Firstcry, Supam had founded Brainvisa Technologies, which turned out to be one of the largest eLearning companies in India.

He was the first one in his family to dare to get into entrepreneurship with Brainvisa, but Firstcry was more of a pain-point that he was facing personally during his first child. Today Firstcry has gone on to become the largest online shopping portal for kids, and expecting moms in Asia.

While at Firstcry, Supam leads the show by designing and executing the company’s long and short term plans keeping in mind their strategy. A true leader at heart, Supam will always be seen as the first one to initiate something, and would also not shy away from guiding or directing the team to achieve targets.

Overall, he is one-of-a-kind sharp business minded persona with a keen eye to the details and also makes sure to give an extra importance to customer service, for it is one of the biggest features that set a company apart from its competition. And personally speaking, in his free time, he loves to run or play squash.

Soon after he completed his Post graduation from IIM, he began working on a project and launched the same in 2000. The project was none other than Brainvisa Technologies. The main strength’s of the company lied in its instructional design and end-to-end learning solutions that it provided.

Brainvisa was nothing but an E-learning company which focused on helping businesses around the globe to increase the learning & training effectiveness, by designing tailored learning solutions which again focused on set & defined business objectives.

In a period of less than 8 years, Supam grew Brainvisa to make it one of the largest e-learning solutions providers globally and also went on to expand his first baby to offices in the US, Europe, and Australia along with two development centers in India as well. They now also had a strong development team of 450 employees and a core team of experts in logistics, aviation, pharmaceutical, telecom, technology verticals, etc domains.

As much as the growth was unbelievable, this stint of his came to an end in 2007, when he decided to sell off the company to a US-based group Indecomm Global services for $25 million. But it was very different from what it looked like!

Although, he had exited the company, but he was still a part of the organisational activities till almost the end of 2009! And during the same time, he was also preparing for a grand venture which would take him to different heights.

How was it formed?

Now during his days with Brainvisa, Supam had become a father and his work required him to travel a lot to the U.S. and Europe. So he used to bring back a lot of products for his newly born daughter as the quality of products available abroad could be trusted and also because many of them were not available locally.

Now when he moved out of Brainvisa, he began searching for products for his daughter and couldn’t find the ones that he looked for. That is when he realised that, there was a huge demand-supply gap in the domestic market for children-focused brands, including many international brands as well.

As he began researching further, he figured that, the baby and kids industry in India had an approximate turnover of about Rs.50,000 Cr and 95% of these sales were offline.

And even though, the standard of living & the spending capacity on children’s apparel, with better brand image and quality, had significantly increased over the period of time, the market still remained highly unorganized, and customers didn’t even have easy access to world class brands or for that matter variety and good quality products.

So the idea had now become very clear to him. He wanted to create a platform which could bring easy access for quality baby and kids products for the parents. He wanted to provide great variety but with top-of the-notch quality. He wanted to bridge the gap for the Indian parents with his model.

Once all that was sorted out, Supam along with his friend Amitava Saha and with seed capital of Rs. 2.5 Cr., raised from personal resources and friends, started BrainBees Solutions. And then under the wings of BrainBees, they launched Firstcry.com in 2010.

Now since the time the idea began, because of its uniqueness it started to catch customer’s eye very quickly, and in no time it had become the talk amongst the parents as well.

By 2011, BrainBees also launched another portal called – Goodlife.com, it was an online store for home and personal care products. What many people weren’t aware about was that, goodlife.com was a grand strategy created by Supam for customer retention, and in a matter of 2 years, about it had about 30% of its customers from Firstcry.

And in the next one year, the company had grown far more than anyone’s imagination and had also began with their new franchise model. The whole behind this idea was that, most of the people in the Tier 3 cities do not turn to the internet to buy such products and Supam really wanted to capitalise on this market.

Hence, in attempts to profit from both; online & offline markets, Firstcry expanded its physical base to cities like Bhilai, Dehradun, Haridwar, Kanpur, Bharuch etc. In other words, this was a mix of click-and-brick model, which had a deeper focus on Tier-II and Tier-III towns.

Soon after the launch of these stores, the company also decided to partner with some enterprising & like-minded professionals and opened these franchise stores as well. He also setup an internal team that used to screen, select and then also helped to setup the store for the franchises and gave them all the ammunition including from architectural perspective, design, stock selection, providing systems, training the staff, POS software – literally everything was taken care by the company..

And even though these stores had a break-even period of 18-24 months, but because of the uniqueness of this idea, these stores began to turn operationally profitable within the first 3 months itself and the sales from these small towns; be it through the website or the stores were beginning to account for half the company’s revenues.

Firstcry was now following an inventory-based model, and was shipping products across the country from four of their warehouses in Pune, Delhi, Bangalore and Kolkata and their revenues were now touching Rs. 100 Cr.

By the end of the year of 2014 – the company had on-boarded 600 national and international brands, and had also launched its own private label called BabyHug (apparel brand) and CuteWalk (footwear brand) which was adding to about 20% of their revenues.

What was even more shocking was that, all this was achieved without any grand marketing or advertising strategy.

Although the company in its initial days, did do some TV & print ads, but as they realised that it was a low return and high cost model, they stopped spending on it. And now, most of the advertising was through word-of-mouth and some amount of online advertising.

Other than that; Firstcry had invented an out-of-the-box strategy of directly reaching out to the parents-to-be. Firstcry used to run a unique programme, wherein they used to reach out to over 70,000 unique parents every month.

The ‘Firstcry Box’ contained samples of products of different brands worth approx Rs. 700-1000, which were needed by mothers immediately after the baby comes back home. The box specifically contained basic necessities like diaper, lotion, oil, etc from leading global brands like Mamy Poko and Libero. So far the company had already delivered more than 6 lakh boxes across India.

And since then, when we look at FirstCry.com today; it has gone on to become not only India’s but also Asia’s leading online portal dedicated to moms, babies and kids. In a matter of just 4 years, FirstCry.com has come out to become a clear leader in its niche.

FirstCry.com is also known to have the highest numbers of Stock Keeping Units (SKU’s) and they also have the largest range of products. Their product range has grown to include a total of more than 70,000 products such as infant accessories, apparel, books, toys, games, educational CD’s etc. from 700 leading National & International brands like Mattel, Ben10, Pigeon, Funskool, Hotwheels, Pampers, Disney, Barbie, etc, for children up to 15 years of age.

Other than that; they also hold an inventory of around 15,000 to 20,000 products in their over 100 offline stores which are mostly located in Tier-1 cities like Bangalore, Chennai, Noida, etc.

And what adds as the finishing touch to their whole picture is that; every store of theirs has been installed with a 32 inch touch screen kiosk, where a parent themselves can order any product which is not available at store at that moment, but is available online. This highly innovative idea breaks the barriers of buying online.

Nice article. You can get amazing deals for baby products here Firstcry