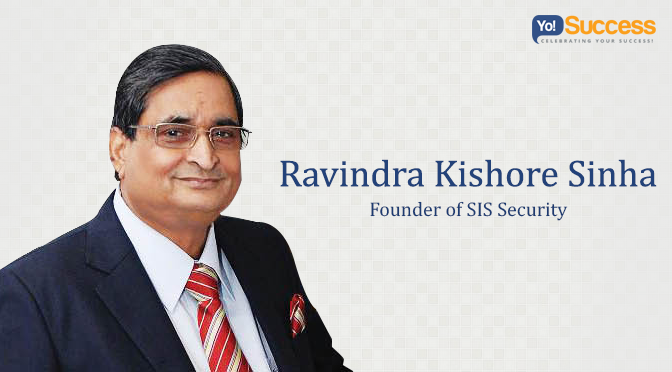 Today, with over 78,000 permanent employees, 6000 corporate customers and a turnover of more than $500 Million (Rs. 3200 Cr); SIS Group is considered to be in the elite group of leaders of the security fraternity business support services across Asia Pacific and is ranked 14th globally in terms of revenue.

Having completed his graduation in Political Science and Law, RK initiated his career with journalism and had also received multiple awards and accolades for his brave work as a war correspondent during the Indo-Pak war 1971.

He is also the proud author of “Janandolan” – which was & is largely known as the foremost authentic research book on the student movement in India which was led by the revolutionary leader Jai Prakash Narayan between 1970 & 1975!

More recently, he was also nominated as a Member of the Parliament to the Rajya Sabha by Bhartiya Janta Party in 2014.

Personally, RK – a spiritually connected man that he is, makes sure to fulfill his commitment towards his family. He has one son named Rituraj Sinha – an alumni of Doon School and Leeds Business School, currently acts as the CEO of SIS Group.

Even though he owns a fleet of luxury cars from Mercedes, Land Rover to Audi and many more, but RK being a man with an ideology of “simple living and high thinking”, still prefers to travel in his Innova. Believe it or not; he still uses the old BlackBerry mobile he had bought years ago and likes to use his other gadgets till they become unusable. His favourites include Desi foods like Litti-Chokha and when it comes to holidaying its hands down Dehradun over Switzerland. Clearly, not a brand conscious person, RK prefers comfort over name or price tag.

RK’s eagerness & thrust for knowledge has taken him to every nook and corner of the globe. And soon after his education got completed, the path which led him to the epitome of success began!

He initiated his career as a journalist; particularly a war correspondent during 1971 war. Even after the war ended, RK stayed in touch and became friends with many of war veterans from the Indian Army. Back then he had no clue, what he was building.

Most of these soldiers were made to retire, soon after the war ended, on the grounds of minor injuries and since then were looking for jobs. They walked up to RK for help and even though wanted to help them, but he had no idea how to do it.

Anyhow, he thought of giving it a shot and in an attempt to support the brave jawans (soldiers) of the Indian army, RK approached his friends for help and guidance for suitable openings.

While all this was going on; in 1974, a blessing disguised in a misfortune happened! His service contract with the newspaper he was working for expired and they didn’t renew it, making him jobless as well. Although, he started working as freelance journalist but this phase also gave him the time to think for an alternative career path!

And while he was trying to help his army friends, he came across Hari Budhia (owner of a small factory in Ranchi) who needed 11 security guards for his factory based in Ramgarh. Although he had the men but he had no money to buy uniforms for them, who were ready to start afresh. So he asked for an advance, which Hari readily gave. With that money he bought the uniforms and got SIS inscribed on them.

And with that; in 1974 SIS (Security and Intelligence Services) was born!

Now once that was done; the next set was to set up an office, but again he didn’t have any money. After a lot of efforts; RK finally got a garage as office space in Patna from an acquaintance, who gave it to him with a promise that he would take rent only if Sinha made any profit.

And since then RK never had to look back!

The period from 1978 to 1992 was the initial formation years for the company, where they built a solid base, name and respect for themselves, in every aspect. What was interesting about SIS was that; it was the first security service providing company which was started by a person who was not a Ex-serviceman and at the same time was a first generation entrepreneur, during a time when venture capital was not even ideated!

But to take things slowly, RK made sure he continued to be a part of journalism and detective services.

But the late 70s – early 80s changed his whole game plan. This was the time when brisk industrial growth had happened and due to that a demand for more contracted security services had increased by a vast number. The old-age ‘chowkidaars’ system was getting replaced by the `private security guards’, which had caused a huge rise in the private security business in India. And obviously SIS also benefited from this trend as well.

That is when, RK left his job and full-fledgedly started developing SIS into a full scale guarding company.

Now so far, SIS operated ex-army personnel exclusively, felt the need of mass recruitment of civilian manpower due to increased requirements in 1981-82. The corporate requirements also demanded men that were specially trained in industrial security duties. Hence, to cater to the needs of his clients, RK established India’s first fully residential training facility, which was setup on the lines of Police Training Academies and was located at Palamu District, Jharkhand.

Between 1985 & 1990, the company experienced a massive growth in states like Bihar, Jharkhand, Orrisa and West Bengal, majorly because they were the only security service company who offered trained, regimented and disciplined manpower.

Other than that, the company also set up another office in Ranchi and at the same time ventured into new territories like Northern, Central and Southern India. And within just 14 years from inception, SIS became a front runner in the private security business.

After achieving this target of his; he moved on to form the managerial cadres of the company by launching the GTO (Graduate Trainee Officer) program, to induct young graduates and training them in every aspect of private security.

Soon after that; RK also established “International Institute of Security and Safety Management” (IISSM), similar to American Society of Industrial Security (ASIS International) in 1991. An institute which had a forum of users, providers and consultants of the Indian security industry! This was followed by the shift of their headquarters to Delhi in 1995.

In 1993, SIS created history by registering itself as the first public limited company in the Indian Security Industry. This was followed by another landmark when the company made implementation of the international standard ISO 9001 which further went on to become certified to ISO 9001:2000 standards – for design, development and delivery of its security services and then certification by the International Professional Security Association (IPSA) of UK in 1996.

Now the 90s had also brought the entry of multinational security companies to India, which led to drastic transformation in the functioning & dynamics of the business. The major changes that SIS initiated were re-engineering the organization and amending the processes of recruitment, training, communication, quality assurance and customer relationship management. Although this change brought recognition to the industry, but at the same time, it increased competition, customer expectations and pressure as well.

These steps also gained him immense respect and recognition not just from the industry, corporates and his clienteles but also from the individuals who were looking for genuine work but lacked opportunities.

Thereafter the Company began making mass developments! At first, they launched their operations in Western India in 1997, added three more training academies in northern and southern regions of the country, increased the size of guarding force by a huge number, introduced several welfare measures (including grievance redresser process) to maintain non-unionized status and retention of manpower, established branch offices in almost all states of India, and many more!

Now a major challenge presented itself in the year 2001 when the attacks on the WTC in New York took place on 9/11. This gravely impacted the global security industry as well and mind you the Indian market was no exception. Overnight; security became a top priority concern for most of their customers. And with that, the requirements of their customers had also changed to more sophisticated and integrated security solutions.

In such an environment, RK decided to take some important steps and without a delay mapped his present business processes and service offerings. R K decided to introduce a ‘professional management team’ to act as a channel for the change process. He got in the topmost professionals with experience in different industries and restructured the Board to induct well-known, professional and independent directors.

And as planned; SIS emerged out to be as the fastest growing companies in India (CAGR 51%) and an unbeatable customer retention record of 92% in 2007.

And since then there has been no stopping for him! The group has diversified as and when an opportunity has presented itself.

And after all such achievements; today, Security and Intelligence Services (India) Limited (SIS) is a security solutions provider in India & Australia and is one of the largest manpower security firms in the Asia-Pacific region.

Other than SIS, he is also in the top-level management of multiple other companies and institutions such as:

And lastly, as a part of his personal social initiatives; RK has skilled over 2 lakh youth and has created permanent employment for over 1 lakh individuals from underprivileged sections of our society. Plus, has also led various social programmes like dowry free community marriages, free ambulance service, public libraries, temple construction, flood and disaster relief work in the state of Bihar, etc.