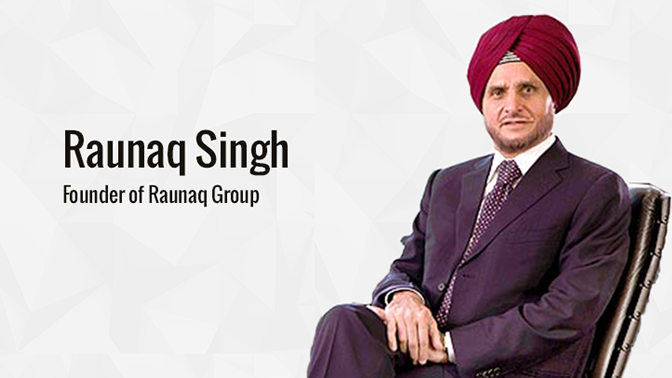 Born in 1922 & died on September 30, 2002; Raunaq Singh was one of the pioneers of entrepreneurship in the independent India who made it big. Presently, he is survived by his wife, three sons and a daughter.

Professionally; he was the founding member of “Apollo Tyres Limited” – the 7th largest tyre company in the world and along with that he also established the “Raunaq Group”. Raunaq Group is divided into six different companies beginning with Apollo Tyres Ltd and then Bharat Gears Ltd, Bharat Steel Tubes Ltd, Raunaq International Ltd, Menarini Raunaq Pharma Ltd and lastly Raunaq Automotive Components Ltd.

A lesser known fact remains that in 1986, Raunaq Singh had expressed his wish to have his memoirs published before he died. But, because of his packed schedule, he didn’t get much time or energy to do so. Finally at the age of 78, he got the chance to begin and without wasting anymore time he short-listed Khushwant Singh, Pritish Nandy and some others as well, but before the project could take off, he passed away, leaving his unfulfilled wish behind!

While climbing the ladder to success; Raunaq Singh has seen both the sides of a coin! On one end; there was once a time when he could afford only 1 paisa/day for meals, and on the other end, when he retired from his position, his group was employing 9000 people on his payroll and another 20,000 people got indirect work through his companies! All this while; his entrepreneurial skills and focus is what has helped him to successfully turn the tables for himself and the corporate India.

Raunaq Singh was a person who truly believed that economic liberalization and globalization of the Indian business was the only way India could achieve the much required push and success and to attain that he worked tirelessly till his last breath.

Raunaq Singh was born to a middle class family in Daska which is now a part of Pakistan. During his young days; Raunaq along with his friends in Lahore used to sell second hand steel pipes on bicycles to their clients, at the price of new ones and that too after receiving an advance.

Later, he joined a steel pipe merchant as a salesman in Lahore at a salary of Rs. 8/month. Doing this job; his entrepreneurial skills & the basics of business got the polishing it needed.

After India became independent in 1947; just like many other non-Muslims, Raunaq Singh too moved to India as a refugee. Initially; he used to camp in a small one room apartment in Gole Market, Delhi along with 13 other roommates. He again started a fresh by working in a small spice shop in the neighborhood called Munilal Bajaj & Co and earned an income of 1 paisa/day. Although it was nothing as compared to what he was earning earlier but because he had to run a household, he took whatever he got!

Now he wanted to start his own venture but his finances were the only thing holding him back . Thus, in November 1947 he sold off his wife’s jewellery for roughly eight grands and headed to Kolkata to initiate his business.

Raunaq opened his very own spice trade shop in Kolkata which turned out to be highly successful too, but his destiny had something else, something much larger written for him.

To close a huge spice deal; Raunaq had to travel from Delhi to Kolkata, but because he could not find an economy class railway ticket he had to purchase the Executive one.

What happened next changed his life for ever!

Raunaq didn’t have the slightest of idea that he was sitting next to the CEO of a leading Steel Tube Manufacturing Company from Germany, who coincidentally was also travelling to Kolkata on a business trip. Soon, the conversation between them began; one thing led to another and the German honcho made a business proposal to setup a steel Tube Manufacturing plant in Kolkata for Raunaq. And because Raunaq didn’t have any money to invest in the venture, the German offered to set it up at his own expense; while Raunaq could repay the amount when the company started to make money. Obviously, Raunaq just couldn’t refuse this offer!

Soon the Bharat Steel Pipe’s first plant was set up in Kolkata, and following that was their first deal of INR 1000. Although the amount was less but with that, the word about the company and its highly promising product range spread in the market like fire. Due to that, within no time the company became a success and now not only did it supply its produce to Indian clients, but also exported Steel Pipes to Europe & America as well.

And this is how Brick-by-brick Raunaq Group was built!

At the age of 78; Raunaq handed over the functioning of the company to his son – Onkar Singh Kanwar and on 22nd September, 2002; India lost one of its first and the greatest entrepreneurs of the century.

Raunaq Group of Industries; established almost 30 years ago holds a diversified portfolio with major interests lying in manufacturing, engineering services, international trade and financial services. Apart from their solid base in India; the group as a whole also has Technical & Financial collaborations and joint ventures with some of the most leading companies in USA, Germany, Japan and Norway.

Raunaq Group compromises of 6 companies which include: –

The company is currently chaired and managed by the son of Raunaq Singh – Onkar Kanwar! Onkar is succeeded by his younger son Neeraj as the Vice-Chairman; whereas, his older son Raaja, heads their international arm – UFO Moviez, an award-winning digital cinema outfit and a logistics firm.

The company has a total of 4 manufacturing units combining South Africa, Zimbabwe and Netherlands. With a network of over 4,000 dealerships in India, it gets 62.6% of its revenues from India itself, the rest 27.9% comes from Europe and 9.5% from Africa.

Presently, Apollo has a sales of 30,000 tyres/month in a 250 million tyres/year market of Europe. To manage the operations the company has one tyre factory in Europe & Netherlands, and is in process of building a second factory in Hungary.

The company made its first acquisition in the year 2006, by taking over Dunlop’s South African operations. After which in 2009, it acquired Netherlands based bankrupt tire maker Vredestein.

But in 2013; Apollo teared open the US market by acquiring the Cooper Tire & Rubber for a massive $2.5 billion. Due to this deal, Apollo directly took a leap from the 17th position to the 7th position in the world and also crossed their own target of achieving revenues worth $6 billion by 2016.

Incorporated on 23rd December 1971 by the legend himself – Dr. Raunaq Singh, Bharat Gears Limited is currently chaired and managed by Surinder P Kanwar and is considered to be India’s largest gear manufacturer. The company in general manufactures a diversified range of gears for HCV, MCV, LCV, utility and off-highway vehicles. Their products includes bevel, straight bevel and transmission gears.

BGL is listed amongst the world leaders in gears technology and is also India’s largest gear manufacturer. With provision of the finest gear and transmission technology, their delivery expands to countries across Europe, USA, Mexico and Asia.

BST, started by Raunaq Group or should we say Raunaq Singh himself and is considered to be one of the leading steel tube manufacturers of India. The company was initiated in the early sixties, in a joint venture with Abbey Etna, USA.

The BST pipe plant located at Ganaur, Haryana is equipped with the most sophisticated and automatic ERW tube manufacturing machines available.

These tubes are manufactured with the worlds most advanced technology and they are also the first ones in India to be rewarded with the prestigious American Petroleum Institute stamp of international quality of ERW tubes.

Raunaq International Limited which is currently chaired by Surinder Kanwar, deals in turnkey execution of Engineering Projects primarily for the service of infrastructural and industrial sectors such as Power, Chemical, Hydro-carbon, Metal and Automobile sectors of India.

Menarini Raunaq Pharma is a collaboration between Raunaq Group of India and Menarini group of Italy. Raunaq group is considered to be amongst the top most industrial groups in India which have respected and substantial presence in various fields. Together, they have introduced their Pharmaceutical specialties in the Indian market .

Individually, Menarini with a current global turnover exceeding $2 billion is the largest pharmaceutical group in Italy and has affiliates / joint ventures in several countries. With products being sold in over 100 countries; their product range covers quite a few important therapeutic groups making them as one of the fastest growing pharmaceutical group in the world.

The Italian group also has six research centers in Europe and spends a hefty percentage every year in research activities for development of new molecules and therapies. They are one of the few who have more than 800 scientists who focus on research activities in Gastrointestinal, Antibiotics, Cardiovascular and Oncology Therapeutic categories.

Raunaq Group in collaboration with their Italian counterpart has successfully managed to introduce products in Therapeutic groups of Gastrointestinal, Antibiotics and Cardiovascular segments. The Menarini Raunaq Pharma Limited has a strong and highly trained marketing team of about 200 personnel which includes Regional Sales Managers, Area Managers and Professional Services Officers located in different parts of the country.

After the completion of Clinical Trials / Approvals by the Drug Controller of India; they plan to introduce new research molecules of Menarini International in the Indian market. Along with that; the company also has plans to introduce new molecules which cover those therapeutic groups which are relevant to the tropical diseases prevalent in our country.

Other than that; with its growing success, the company has also expanded its reach into sub-assemblies, Industrial Gears for Electrical Switch Gears & Circuit Breakers, Winches & Cranes too!

With its headquarters located in the capital of India – New Delhi; the company thoroughly performs, examines and synchronizes all its components before delivery to provide its customers with world class quality.

Often referred to as “Mr. Exporter”, Raunaq Singh’s awards, recognition’s & achievements go far beyond words and writing a book on it would still be an understatement.

Out of the many important positions he has held in various industry and trade associations, below mentioned are some of the most prominent ones: – (Source: raunaq.com)

Raunaq Singh is one of the very few people who is considered to be the pioneer of entrepreneurship of Independent India and is also idolized by many.

Even though he attained an eye for business since the beginning, but unlike many, he had did not have the leverage of higher educational qualification, money or for that matter a godfather.

It was because of his strong and shrewd entrepreneurial skills that he turned out to be immensely successful in the corporate world.

A man, who will always be remembered by us!