As an author; she has written six best seller books on entrepreneurship – Stay Hungry Stay Foolish, Connect the Dots, I Have a Dream, Poor Little Rich Slum, Follow Every Rainbow and Take Me Home.

As a widely acclaimed blogger; one may also find her writing about careers, youth or entrepreneurship on her blog – Youthcurry, Businessworld and Rediff.com.

Additionally, Rashmi is also a motivational speaker at various corporate / educational institutes, acts as a mentor to young entrepreneurs, and is a consultant for international youth research agencies such as The Futures Company (a division of WPP, London) and Flamingo Research (Singapore).

And as an entrepreneur; Rashmi has co-founded JAM magazine which is one of India’s largest selling youth magazine and is also the mind behind JobsOkPlease.com & Bloody Good Book!

Other than that; she has also been the Consulting Editor with Bloomberg UTV where she hosted India’s first call-in show on careers ‘Stay Hungry’.

Talking about her qualifications; Rashmi has completed her graduation in Arts specialising in Economics from the Sophia College, after which she pursued her MBA in Marketing, Advertising & Business Management from the Indian Institute of Management, Ahmedabad.

Personally speaking; she is married to Yatin Bansal and is also blessed with a daughter Nivedita.

How did she begin her journey?

Being the daughter of an astrophysicist, who worked as a scientist at the Tata Institute of Fundamental Research (TIFR); Rashmi out of sheer obviousness, was a topper throughout her school life and had also received the National Talent Search Scholarship.

As she moved into her college life, Rashmi turned into a prolific writer and went on to give her words for over 100 stories which happened to get published in some of the leading newspapers and magazines of those days. She also happened to be one of the young journalists who got selected for ‘The Independent’s Journalist Trainee program’.

Anyways, as soon as she completed her college, Rashmi moved got into IIM – A, to pursue her MBA in 1991, after which she joined Bennett Coleman and co. as a management trainee in 1993.

She happened to stick around for a good 2 years, wherein she gradually rose to the position of a brand manager position. Her job profile included conceptualising and executing consumer promotions, creating advertising communication and providing strategic inputs for their brands – Metropolis on Saturday and The Independent. A lesser known fact also remains that; Rashmi had also launched and managed the highly successful youth page “Indy”.

And, while working at Times of India, the entrepreneur in her conceptualized an idea which changed her life forever!

In addition to ideating, editing and providing direction to the magazine I also occasionally write for it. I am primarily an editorial person but my marketing background helps in conceptualising youth oriented promotions that JAM undertakes.

During her stint with Times of India, she had started a youth page in ‘The Independent’ newspaper (now defunct). This page went on to become really popular which made her realise that, there barely was anything for the youth.

This gave her a brilliant idea that – Why just a page, when you can dedicate a whole magazine to youth!

Hence, without wasting much time; with a capital investment of just Rs. 50,000, along with a team of few like-minded friends and her husband in 1995, JAM was born!

So what was JAM?

In the simplest terms, Just Another Magazine or as they like to call it – JAM, was a magazine Of, For and By young people! The beauty of JAM was that, they not only provided youth centric content, but also nurtured talented young people who wished to be a part of the industry, preferably & mostly students from colleges across India.

Now she had taken this drastic step at a relatively young age of 24, and coming from a surrounding where all her childhood friends went to IIT, or did PhD’s abroad, made her father go completely against the idea and made him believe that she had chosen the wrong path which would lead to losing out on stability and security.

But Rashmi was adamant about what step she had taken and she decided to stick to her decision. She being a youth herself believed that, JAM used to keep her closely connected with the youth, their hopes, dreams and could easily understand their needs or desires as well.

And in a matter of 10 years, she has brought JAM to a scale where it is now become India’s largest youth magazine.

After years of hard work and efforts to build a stable JAM, once she thought that she could try her hand at something else, Rashmi while playing her hand at entrepreneurship, also started JobOkPlease!

Well as the name itself suggests that it was a job portal. The primary focus or Unique Selling Point was their target audience of the under-served niche category i.e. the students and fresh graduates.

Unlike many other competitors back then, there were not many opportunities for the youth who were looking for a part-time / freelance or a summer job.

And yet again, it turned out to be a HIT!

Her third entrepreneurial stint came in after she transformed herself into a successful Author!

After she became a renowned author, she decided to transform Authorship into Entrepreneurship.

While she was an author, Rashmi often used to receive many manuscripts every now-&-then from budding writers who wanted advice on how to get their work published.

This is when she realised another pain-point in the system that, how difficult it was for a new author to get noticed. As a matter of fact, quite often some good books would get rejected by the best of publishers, and the best example is author of Harry Potter J K Rowling.

That gave her the idea to start an independent platform the masses would decide what they want to read and like to read.

Having thought that, she along with Niyati Patel founded Bloody Good Book in 2014!

It was nothing but a small yet effective initiative to help, support and promote new writing talents across India, using the power of crowd-sourcing and crowd curating to find the next great book.

Their process was very simple. All, a writer had to do was –

In such a short span, the company has grown to add over 5600 members, over 2400 reviews, and are all set to put their first two books into publication in partnership with Westland limited for their print publishing.

In addition to that, the company has also created a separate division which takes up selective projects for corporates (e.g.: biographies for CEOs) which keeps the rolling (revenue-wise) going and allows them to take the risk with publishing new talent.

So authorship came to Rashmi during her days at JAM!

She had become widely popular amongst the youth, and if you were a teen you wanted to listen or read what she had in mind. She used to give guest lectures or acted as a panellist at IIM and various such institutes.

That was the time, when she happened to meet Professor Rakesh Basant of the Center for Innovation, Incubation and Entrepreneurship at IIM Ahmedabad and got the idea to write a book, documenting success stories of MBA entrepreneurs. 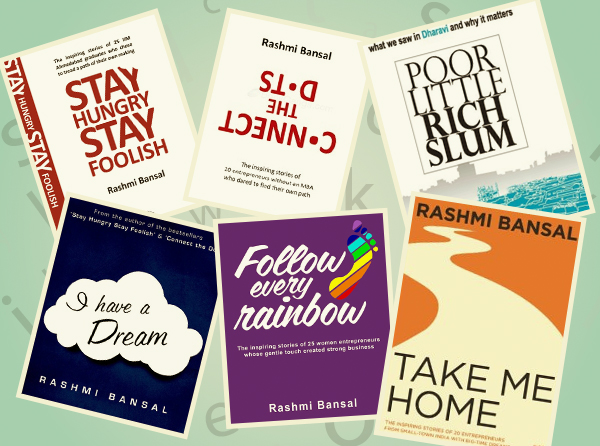 Even though she had investors backing her, but she was given complete freedom in executing the book. The writing she chose was an informal, easy-to-read style, over the heavy & complicated management case study.

Because she was an entrepreneur and alumni herself, she got the easy access to these entrepreneurs.

After putting their life struggle to words, with the help from Eklavya Foundation & IIM Ahmedabad, Rashmi published “Stay Hungry, Stay Foolish” in September 2008 by.

The book turned out to be so amazing and engaging, that purely on word of mouth, it managed to sell 100,000 copies in just 10 months. Even after three years, the book still remained to hold the number two bestseller rank in non-fiction according to ACNielsen BookScan. And so far, the book has sold more than 350000 copies and has also been translated in about 8 languages.

Moving on, after the success of her first book, Rashmi began writing her second book – “Connect the Dots”.

The book was about the life of 20 entrepreneurs who were not born with a great financial backing and struggled for a brilliant future on their own. Clearly, she knew what the audience wanted, because this book too, went on to become another best seller, which sold more than 100000 copies and is still listed on the number 4 on ACNielsen BookScan among non-fiction titles.

Again, her third book, “I Have a Dream” also had a parallel base to that of her previous styles, but this one focused more on social entrepreneurs. She noticed that, most people use a mix of English and Hindi when they speak or think in daily life. Capitalizing on that, Rashmi very smartly, slipped in an interesting mix of Hindi words and phrases to her book, so that it captures the voice of that person, adds a desi touch, and also makes it more real.

And yet again, she managed to sell over 60,000 copies in just 3 months, only to become the number one selling non-fiction title.

Following the similar style and trend, Rashmi has gone on to become the voice of young India and has also managed to write three more best sellers – Poor Little Rich Slum, Follow Every Rainbow and Take Me Home.

More recently, Rashmi has taken inspiration from her travels across the country, visiting 80- 100 schools and colleges each year, and from the young people who have the courage to be bold, be different, and has written her latest book – ‘Arise Awake’. It is story of student entrepreneurs who start a company while they were still in college.

Some of her future projects include two books — one of which is about a story of how management gurus and spiritual gurus have come together to create India’s largest mid-day meal program – ‘Akshaya Patra Foundation’. And the second book will be in collaboration with Zee TV, where she would be collecting stories sent in by viewers on the theme of ‘Ummeed’ and writing a book on the same.

What is common about all her books or Rashmi’s authorship is ‘entrepreneurship’! What she has been trying to put across through her books is that life exists beyond the Tatas and the Birlas and that all you need is the desire to excel. She also tries to give a ‘moment-of-fame’ to the several unsung heroes, who have managed to achieve remarkable success starting from zero, by writing about them in her books.