Mohanlal ChauhanThe mind behind the success of the present Parle Group Published On: Wednesday, May 13, 2015 Views 29788 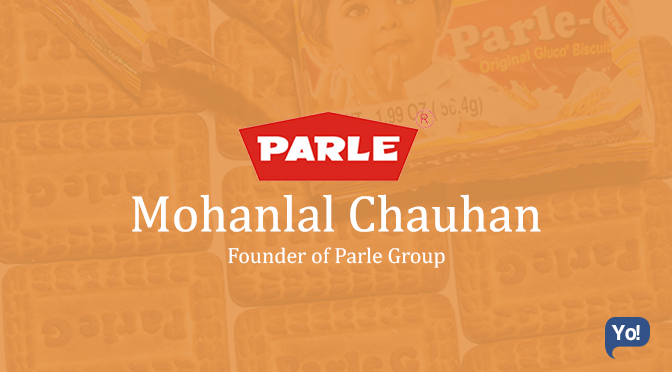 Mohanlal Chauhan is the pioneer and the mind behind the success of the present Billion Dollar Empire – Parle Group, which now is separated into Parle Products, Parle Agro & Parle Bisleri.

A long family tree that their family holds; starts all the way back from their grandfather – Mohanlal Chauhan! Mohanlal had five children Maneklal, Pitamber, Narottam, Kantilal and Jayantilal. And collectively, they ran the show and made Parle what you see today!

Later as time passed, the legacy was then forwarded, eventually to Jayantilal’s eldest son Late Madhukar Chauhan. And today after the separation, the group has been divided amongst three families: –

Unlike rest of the folks in those days; Mohanlal Chauhan and his family’s way of living and ideologies were far ahead of their generation; regularly going out for dancing, drinking and eating out or organizing parties at home, were pretty much a regular thing for them.

How did Parle Group come into existence?

While India was moving towards its freedom, at the same time an ordinary man moved to Mumbai from a small village near Valsad in South Gujarat called Pardi at a minor age of 12. His name was Mohanlal Chauhan.

The only dream this man held at that point of time was to learn sewing. To his surprise; soon he overcame his dream and to top that, he also managed to set up his shop in Gamdevi, Mumbai by the age of 18.

As his fortunes improved he also opened two shops of his own by the name of – D Mohanlal & Co and Chhiba Durlabh.

At the same time, he made sure to teach his sons every trick of the trade, which you don’t get to learn at any School and then finally introduced them into the business. All the five brothers divided the work amongst each other and used to give flawless results.

During the World War I, the brothers eventually decided to close down the tailoring business and move into confectionery-making. And with that the Parle Group was born!

After the First World War ended, when he saw that his sons could run the business alone, Mohanlal Chauhan decided to officially retire in 1936.

To run the company effectively; the work was divided amongst the five, keeping in mind, individual fortes. Narottam and Jayantilal handled the technological end, Pitambar took care of the financial aspect, Maneklal was the fund-raiser, and Kantilal took care of daily administration.

Now the company had begun only with a huge debt on its head, and only Maneklals cleverness was what had kept them sailing.

As a matter of fact; there was a time when, the ongoing problems and the increasing loans had brought them to a stage where, they were actually in the process of selling out to W H Brady when, suddenly their records showed a exceptional profit of Rs 3000.

The business began to gradually grow and just within a decade i.e. in 1939 during the time of World War II; Parle announced their first biscuit.

As per laws; initially they were only allowed to manufacture it for the soldiers at war and could not sell them to the consumers domestically or internationally.

Nevertheless; everything happens for the good! Similarly, Parle (earlier known as Gluco) got a chance to learn from their mistakes and later when the Brits left India in 1947; the biggest opportunity knocked their doors!

Not only did they launch their biscuits for the Indian consumers at large, but they did so with an Ad campaign – “Freedom from British Campaign”. And within no time, Parle became a product of every household!

But things didn’t remain the same forever and the unthinkable happened!

In 1961, due to some unknown reasons; Parle went for split – and their soft drinks business was allotted to Mohanlal Chauhan’s son Jayantilal Chauhan, whereas, their biscuit factory was taken over by their cousins Ajay, Vijay, Sharad and Anup Chauhan.

This separation for them was, as good as starting all over again!

Hence, immediately, a plot of land was bought and his eldest son – Madhukar was appointed as the Vice President and at the same time, the US-returned 22-year old second-in-line Ramesh was given the division of planning and building the factory.

In 1964; just when things began to pickup pace, the unavoidable happened.

Jayantilal’s eldest son and the Vice President of the company – Madhukar along with their cousin Jitu passed away in a plane crash. The news was a huge shock to everyone; the family and the company had come to a standstill.

But the show had to go on and having said that; after the collective decision of the elders, the reigns of the rising brand were passed onto Ramesh Chauhan.

Now what made the situation even more difficult to deal with was that; when Ramesh took over, the company was going through a rough phase and their sales were drastically dipping with every passing day.

Ramesh was new to the leadership role and the times were crucial too. But he handled the situation with flying colours and successfully managed to bring the company out of the downfall with various modern management techniques and his father’s ‘desi methods’.

In 1969, Ramesh also bought the mineral water company – Bisleri from Felice Bisleri of Italy at Rs. 4 lakhs. Riyaz was originally an Italian company created by Signor Felice Bisleri, which originated in Italy. He first brought the idea of selling bottled water in India.

But what turned out to be even better for them was that; when the Janata Party govt. came into power in 1977, for some reasons the Coca Cola brand was forced to close shop in India.

This opened a whole new range of opportunities for Parle and just overnight; Ramesh started introducing soft drinks like Gold Spot, Limca, Thumbs Up, Citra, Maaza into the market; and in a matter of no time, they were literally ruling the market. During those days, with a network of 58 bottlers, Ramesh’s Parle had a market share of more than 80%.

For almost 14 years, they ruled the market with whatever they offered, after which the government changed and somehow, by 1991, Pepsi had made a backdoor entry into India, by closing a deal with Punjab Agro. They began manufacturing Potato chips and Tomato Puree, because of which Ramesh lost four bottlers.

What worsened the situation was when the then Finance Minister – Manmohan Singh, introduced the liberalization policy. With that gate opened, Coco Cola returned back to India with a big grin.

They also started renegotiating with Ramesh’s bottlers. They were evidently getting poached by Coca Cola. Obviously, something had to be done. So after deep thinking and calculations; Ramesh Chauhan – the then CEO of the group, with tears in his eyes decided to exit the market by selling off everything except for Bisleri, to coca cola. He received a sum of $40 Million in exchange.

But what added to the whole fiasco was that; at the same time, the company also went through another split, and things took a completely new turn from here onwards!

And since after the split; Parle Company today has become three separate companies, owned by the different factions of the original Chauhan family: – Parle Products, Parle Agro & Parle Bisleri. And when you look at them today, they somewhat look like this: –

Parle-G is the only product which even though has less than a $1 billion sale in a year, still manages to maintain a great lead over its rivals such as Hindustan Unilever’s Wheel and Ghari Detergent.

In 2012; Parle Products as a company sold Glucose biscuits worth more than Rs.5010 Cr, surpassing the domestic sales of Godrej products and Dabur, and to top that, this number was three times more than Maggi also.

This means that Parle Products sold more than 100 crores packets of the glucose biscuits every month or 14600 Cr biscuits in 2012.

Parle-G is the most selling biscuit in India and it became the first Indian FMCG brand to cross Rs.5000 Cr mark in retail sales in just one year in 2013.

Since the launch; the company has grown on to add over 33,00,000 distribution outlets, with manufacturing facilities in Mumbai, Rajasthan, Bangalore, Kutch, Maharashtra, Haryana and multiple other manufacturing units on contract. And all these are known to be the largest biscuit and confectionery plants in the country.

It is led by Prakash Chauhan along with his three daughters: Schauna (CEO), Alisha (Director) and Nadia (Director).

Today, Parle Agro has a global presence by exporting to more than 20 countries. It is because of their collective effort that Parle Agro, has transformed into a Rs. 2500 Cr organization, which has more than 6 lakh outlets, 76 manufacturing facilities and 3500 Channel Partners.

It is led by Ramesh Chauhan, his wife Zainab Chauhan & his daughter Jayanti Chauhan and all the shares of Bisleri are held and owned by the family only.

After the sale of all their products was completed by Ramesh Chauhan in 1995; he diverted all his focus towards strengthening, branding growth of Bisleri. He made sure to make it so huge and so popular that, today Bisleri has become a generic name and to top that, it has replicated the name for bottled water, itself.

In 2003, the company also announced its expansion to Europe. And today, Bisleri holds a 36% market share in packaged drinking water in India.

As of 2012, they have 18 manufacturing facilities, 13 franchisees & 58 contract packers all over India.