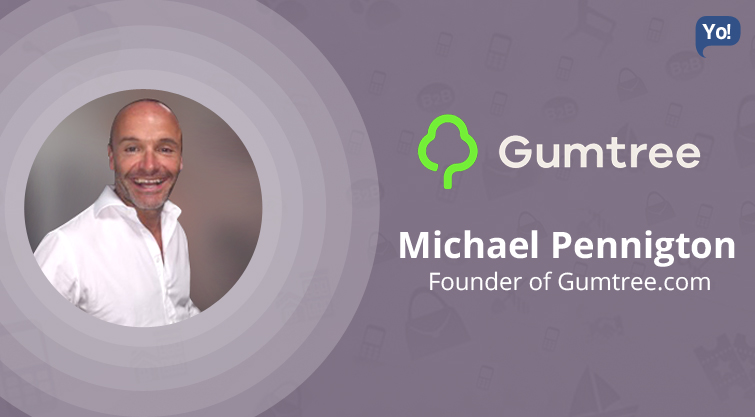 Presently a digital seed investor, Michael was also the cofounder of Gumtree.com and Slando.com.

Michael has completed his BA (Hons) in Economics from the Kingston University in 1990, and had started his career as a Banker with Hambros bank [a private banking division of Société Générale].

Due to a pain point that he had faced, during the days with the bank, he had started Gumtree.com in 2000, which they sold to eBay in 2005 and started Slando.com. Slando was sold to South Africa’s biggest media group – Naspers, in 2011.

His life, successes and achievements being an inspiration to many, yet are extremely hard to find or read. Since, he is widely known to be a media shy personality, and in his whole tenure has barely faced the media, one may rarely come across any article about him.

Even after making so many big deals, he makes no big deal about it – no photo shoots, no TV appearances or interviews and no advising the government.  Unlike his dotcom peers, he doesn’t enjoy a celebrity status!

After two successful dotcom deals under their belt, one would imagine that Michael would be one heck of a Spendthrift, with flashy cars and many houses, but shockingly he is quite the opposite and owns a red scooter, and believes in spending very wisely.

Let’s tell you the lesser-known story of his successes!

Now owned by eBay – Gumtree.com is a British online classifieds and community website, with options of free and paid listings.

Gumtree is predominantly known to be a free listings website, but at the same time, it also allows the users to promote their ads by “featuring” them on the site in different ways. Different types of featured ads can be bought for different prices. Some of them include: -

Other than that, they have also extended their service to business customers as well. They also have classified advertising packages for companies and businesses looking to use Gumtree’s services.

At this point, their service is directly or indirectly (by partnering with other classified sites), present in less than 30 countries across the world.

Gumtree.com was cofounded by Michael Pennington and Simon Crookall in 2000.

It all started during their banking days.

Their work profile at Hambros bank required them to travel abroad a lot. During one of such trips, they were looking for a new flat, a mobile phone and even friends, when they noticed a huge gap in the society. A pain point that deeply existed, but nobody had done something about it.

This was the late nineties, so the internet in the west was also booming at full speed. So on one random night out, a couple of drinks down and after immense brainstorming, they decided to capitalize on this opportunity.

The idea was to setup a classified ads website connect people with similar needs. One million Australians, New Zealanders and South Africans based in the UK, to be specific! Who were either planning to move, had just arrived in the city, or needed help in getting started with accommodation, employment or meeting new people.

Having said that – they quit their jobs, self-funded the project and started the company, in 1999. And after months of rigorous hardwork, research, and trials & errors; at the height of the dotcom boom, Gumtree.com went live in March 2000.

They chose ‘Gumtree’ as the name, because it connected all the three communities!

Since they were self-funded and on a shoestring budget, they used every inexpensive and basic medium to promote their business.

In a matter of 3 years, Gumtree.com had outgrown their initial community of Australians, South Africans and New Zealanders, and had transformed into the next Craigslist of the UK. They had even begun monetizing the website and by 2005, had successfully managed to expand across 31 cities around the world including Edinburgh, Adelaide, Durban and Paris, that too, with just 12 employees. They were also making profits by now.

In 2004, Gumtree was presented with a large cheque by eBay. After many negotiations and discussions, Gumtree was finally acquired by eBay’s classifieds group, for an undisclosed amount in May 2005.

Gumtree’s initially was ready to offer only 25% stake of the company, but eventually they decided to sell off the company. This was because – according to them, the online classifieds field in 2005, wasn’t really a proven business model, and was like shooting in the dark. Hence, they decided to choose the safer route, and sold!

Today, Gumtree.com has transformed into the largest and #1 classifieds portal in the UK, and accounts for 668,000 visitors a day and 18.1 Million Unique Visitors Monthly.

During the negotiations of the sale of Gumtree, the founders of Gumtree.com also began discussing the potential territories where a similar business model could work. So after some research they figured that, the business world was inclined towards China, while the market of Eastern Europe and Russia, remained untapped.

This was like a food for thought for them. None of the Businesses were looking at such a huge territory.

That is when the founders decided to launch a portal that was similar to Gumtree.com in this area. They also explained the business idea to eBay. Since, even giants like eBay can’t be everywhere at the same time, they agreed to partner with the Gumtree founders and launch a similar portal locally.

The idea was to copy the model of Gumtree Countries around Eastern Europe and Russia, and provide them with a portal where one could post classified ads in their local languages under categories such as: property rentals, sales, flat shares, dating, jobs, etc…

Both the parties – eBay and Gumtree founders, chipped in some money, and launched the project. eBay took a 20% stake in the company!

And with that – just a month after selling off Gumtree.com, Michael along with Simon launched Slando.com in 2005 itself. Slando.com was also headquartered in London itself!

Much like Gumtree, the revenue model of Slando was also based on featured adverts as well.

Unlike their homeland, things were pretty different and difficult out there for them. The biggest thing that pestered them was the bureaucracy in the country, which going by their words was – “Quite frustrating”.

Russia was largely a paper economy and to be able to do just about anything, a lot of paperwork needed to be done!

Unlike the UK, where you have to give an invoice to collect the money, in against for the service one acquires; in Russia, you have to provide several different documents to get such a transaction done. Moving money from one party to another, paying an invoice to someone, is an extremely complicated process in Russia.

In 2011, the founders noticed that the business had reached to a stage where the growth of the product required for it to be closer to its customers, and required someone fit for the part. That is where South Africa’s biggest media group – Naspers (who already had a big presence in Russia and Ukraine), came into picture.

They began talks with them, and after running the company successfully for about six years and after months of negotiations, the founders of Gumtree.com eventually sold their shares to Naspers for an undisclosed amount.

Post the sale, the founders were a part of Slando for about six months to oversee Slando’s integration, till 2012.

Today just like Gumtree, with more than 11 Million users across Russia and Eastern Europe, Slando too has transformed into one of the largest and fastest growing online classifieds portals across 10 countries including – Russia, Ukraine, Kazakhstan, Belarus, Hungary, Czech Republic, Slovakia, Portugal, Greece and Brazil – and now accounts for 1600 local towns and regions as well. Since their launch, they are consistently enjoying a 100% year-on-year growth.