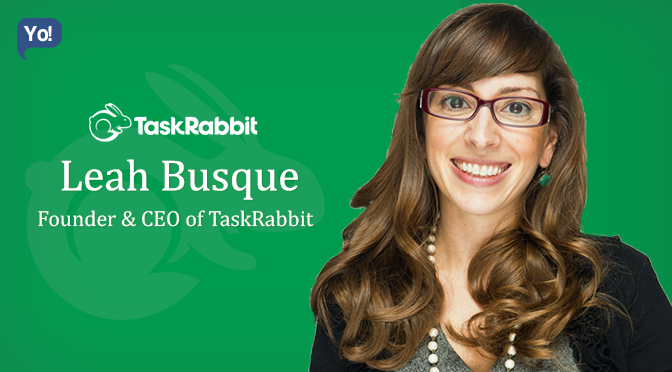 Born on the 15th of the November 1979; Leah Busque is the American Entrepreneur who founded TaskRabbit – an online & mobile medium or rather marketplace, where people can outsource small jobs or tasks to someone in their respective neighborhoods.

An inspiration to many women across the world; Leah is a woman who started her career just like any other ordinary person does, but when you look at her today, she runs one of the most successful business models of her time and to top that, she has built that all by herself.

Since their inception; from a literal figure of ‘Zero’, she has brought the company to a level where they are valued enough to be able to raise around $38 Million from investors like Baseline Ventures, 500 Startups, Founders Fund, Shasta Ventures, Lightspeed Venture Partners, etc!

How did her career begin?

Soon after she completed her education; she got a job at one of the most prestigious IT firms in the world ‘IBM’ as a Software Engineer in 2001. A part of her profile included Software Development, Messaging, Collaboration Software Development, C++, Java programming, and along with that she also had to present at Lotusphere 2006, 2007, and 2008 on current and coming feature areas during the yearly highlights.

Basically, she had to do a loooott of technical stuff which we have no clue off! Anyways, she did manage to continue that for the next seven whole years!

But did that really appeal to her? Umm… Not really!

Now even though her background was technology and she had also studied math & computer science, and she was equally passionate about utilizing technology to connect people in the real world, but her current status was something that was pulling her back.

So without thinking furthermore, in 2008 she cut the job from her life and got into her dream world to ideate. But the only problem was, from where to begin? And after a lot of brainstorming, she finally stumbled upon the idea of her life!

It all happened when one day she needed dog food but didn’t have the time to buy it herself and that’s when it clicked. She realised that, what if she built a medium wherein neighbours would help neighbours, with one-off tasks like dog food delivery. And that was one untouched pain-point of today’s world too!

Hence, without any further delay, she spent the whole summer coding and creating RunMyErrand (precursor of TaskRabbit). And finally in 2008 launched it in Boston with the first 100 “runners”!

The story of TaskRabbit!

Once that was done, Leah first began by taking suggestions and advices from everyone possible and one of such was Scott Griffith – CEO of ZipCar! He loved the idea and encouraged her to see how far she could take the idea.

Motivated; she even came from Boston to San Francisco to join an incubator and get networked with other entrepreneurs. This was Facebook’s start-up incubator – ‘fbFund’!

And guess what? By the time she finished her incubator program, her company was sitting on a whopping $1.8 Million seed fund.

Now soon after she came back, with the money she collected, she hired the company’s first full-time employee – Brian Leonard, a software engineer with whom she had worked at IBM, after which, in 2009, Leah or should we say her company got their first advisor in Tim Ferriss!

And since then, the company very strategically but aggressively, started to walk on the paths of success!

The next phase from 2010 to 2011 was quite an eventful for them, where quite a lot of progress & transformations took place!

It first began with the most drastic transformation! In April 2010, Leah changed the name of the company from RunMyErrand to TaskRabbit.

Now back then; TaskRabbit for a layman was simply an online and mobile marketplace that provided individuals and businesses with friendly and reliable TaskRabbits that would help them with just about anything – from simple deliveries and grocery shopping to longer-term office tasks. It was like the eBay for the real-world labour.

And its functioning was pretty simple too! All a user had to do was:

Within a few months of time, i.e. by June 2010, the founder took another huge decision by moving along with her team across the country to open operations in the San Francisco Bay Area.

Next in the month of May of 2011, TaskRabbit surprisingly clocked another $5 million and by then the company had grown on to add 13 more employees to her team and at the same time had 2,000 TaskRabbits to her present kitty!

By the time they reached October, TaskRabbit had already launched an app for themselves which allowed its users to post a task with an iPhone as well. And along with that Leah also got roped in ‘Eric Grosse (co-founder and former president of Hotwire.com)’, as the firm’s new CEO and shifted her focus completely on product development.

And finally the year ended with another fund raiser of $17.8 million. By now the company had grown on to become a 35 member strong team with an economic activity touching $4 million each month.

Within the next one and a half year, TaskRabbit grew from just two cities to another six, adding New York City, Chicago, Los Angeles, and Orange County to their present kitty as well.

And additionally, they also added a new tool for their “TaskRabbit Business” which allowed their corporate clients to hire temporary workers for a charge of 26% commission.

They tested this idea for next one year and since they faced nothing but losses; hence, Leah eventually shut down her Business Services portal in March 2014, after laying-off almost 20% of her staffing i.e. 13 people from their 65 member team.

But it seems her problems didn’t end there!

By the mid of 2014, her executives at TaskRabbit noticed another grave problem. Her business was beginning decline gradually and at the same time, it was also indicating frustration on the part of the workers who used the site.

To counter that; the company even added another 1.25 million users to its system and doubled its force of contractors to 25,000, but something didn’t seem to be working, something still was missing. But the question was; what was it?

Clearly she could see that; the auction model, which they had opted so far wherein the company’s contractors used to place their bid, was a failed model for both, users and contractors. There were many complaints from the people who posted tasks like – they know what starting price to set, it took too long for contractors to bid on their jobs, etc., whereas on the other end the contractors complained that it used to take a long time to find jobs.

She realised that her TaskRabbit needed a radical change and hence, in an attempt to fix the situation; Leah decided to restructure the whole company!

And as part of the new structure, she also expanded her marketplace’s operations team, which closely went through the complete data until they found the actual reason behind the decline. This also led to another undisclosed number of layoffs of employees as well.

She reorganized the whole business model of TaskRabbit and announced they were rolling out a complete reboot from its original task posting and bidding model to a direct hire only model.

Along with that; various other changes were also brought about within a month itself, namely:

And since then their numbers have been speaking for the company! So far the company has managed to raise a whopping $38 Million which only makes us think, what their actual valuation would be?

And today, when you look at them from a broader angle, the company seems to be growing exponentially.

Talking about their acquisitions; the company has so far made two acquisitions in their life!

1. The first one was in the year 2012 of ‘SkillSlate’ for an undisclosed amount.

A company that was founded in 2009, and allowed people to search for local businesses that provide the services they wanted. Because their business model was a replica of TaskRabbit, they bought it.

2. The second acquisition happened of ‘One Jackson’ by the end of the same year for yet again an undisclosed amount!

And since their acquisition; One Jackson shut off its original service and instead of designing clothes in-house or aggregating collections from elsewhere, the site now works as a platform to connect consumers with designers.

Additionally; as a part of the acquisition; Anne Raimondi – Co-founder, One Jackson joined TaskRabbit as Chief Revenue Officer, Yee Lee their other Co-founder became TaskRabbit’s VP of Engineering, and engineers like Ken Mitsumoto, Bob Ralian, and Rob Robbins joined the company’s engineering team.

TRIVIA: – Leah personally has also invested in Yellowsmith – a company that produces jewellery designed by indie designers and voted on by consumers.