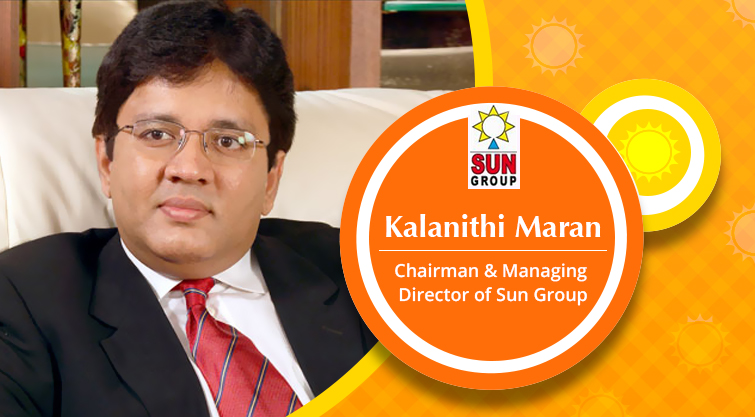 Born on the 22nd of July 1964; the media mogul – Kalanithi Maran, with a net worth of $2.2 Billion is the Chairman & Managing Director of Sun Group – Asia’s most profitable Television Network.

He is married to Kaveri who is the Joint Managing Director of Sun Network, from whom he has a daughter named Kaviya (Born 1992).

He has time and again proved his success; since the time he entered the media business his father’s political rivals were ruling the state for most of the period, he not only emerged as No. 1 in neighbouring states, but he did so but defeating his competitors who were politicians and business men from those states.

Of course, their political background has helped them to some extent, but their success has been because of their undeterred hardwork and dedication towards their work and goal.

Over the period of time, Kalanithi has turned out to become a role model for the youth of Tamilnadu, and is now considered to be the perfect example of sheer hard work, dedication and business acumen.

Kalanithi had the leadership qualities since the very beginning, and always was driven towards doing something dissimilar than the herd.

After completing his schooling at Don Bosco, Chennai [earlier Madras]; Kalanithi joined the Loyola College, and in no time was appointed as the student’s union chairman and also led an agitation on the Sri Lankan Tamils issue.

Soon after, he completed his college, he moved to Pennsylvania, to pursue his Masters in Business Administration from the University of Scranton.

While at it, he had an altogether a different experience, which gave the idea of a lifetime. During the mid-80s, Kalanithi saw that US was offering had a wide array of channels which were spread across multiple genres. This got him to thinking that, if this technology was brought in India, it would bring about a revolution.

But being so young, he wasn’t ready to take up such a big task. Hence, after completing his Masters, he came back to his home town and started his career by working for Sumangli Publication as a circulation clerk.

Further on, he also went on to work for a weekly Tamil magazine which was owned by his family called – Kunkumam.

Later in the 1990, he started his first business under his family-wing, a monthly video news magazine (VHS) in Tamil called Poomaalai. After successfully running the same for around 2 years, what began came to an unfortunate end in 1992, when he was asked to stop the business due to piracy.

But this didn’t stop him from moving ahead in life. He had now gained the necessary experience, and his gut also told him that he was ready for something big.

And hence taking inspiration from the idea he had got in the US, he started the SUN Network! 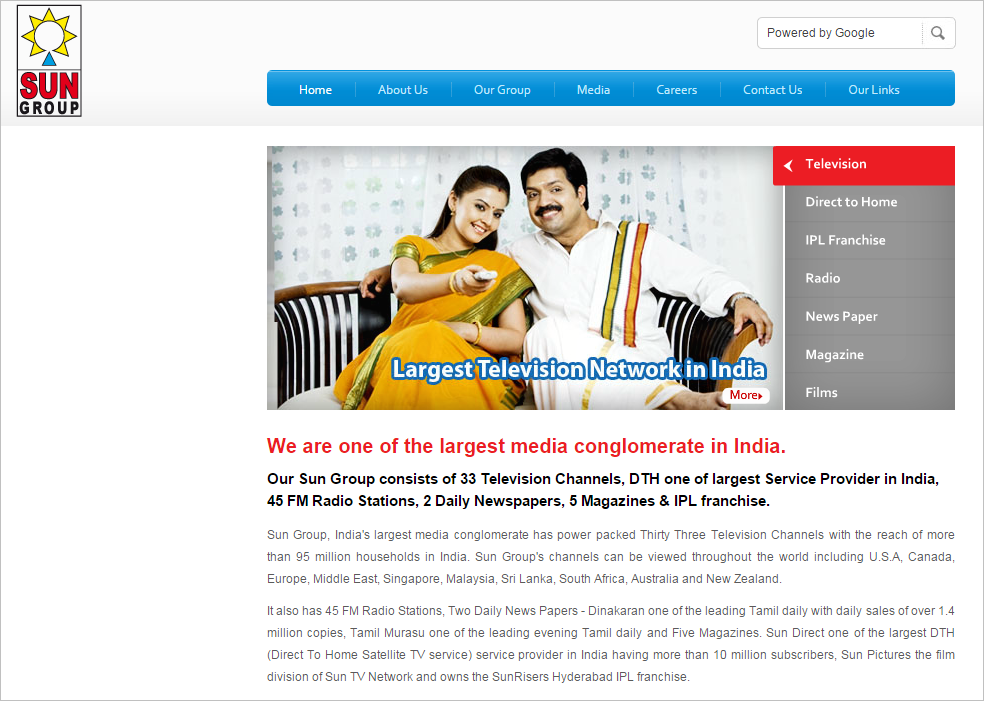 Now as much as frustrated he was by the uncontrolled piracy, the 27-year-old Kalanithi decided to keep his calm and make the most out of the “opportunity in-disguise” that had presented itself.

Hence, he took a bank loan $86,000 guaranteed by his father, chipped in all his savings and started Sun TV on the 14th of April, 1993. He also sold out a small stake to his Granduncle M Karunanidhi’s family, in against for a minority stake (which Maran later bought out). His original founding team of 25 people were mostly Kalanithi’s college friends.

The next step was to get a transponder, for which he first approached Subhash Chandra, who had recently started Zee TV. He approached the man to ask him for an afternoon slot on their transponder. To his luck, he didn’t even get a chance to meet Subhash, and his proposal was rejected by a Junior Editor in the company, stating that the idea wouldn’t work as wasn’t enough audience for Tamil programmes.

Clearly, the junior wasn’t aware that, the four South Indian states of India accounted for more than one-fourth of India’s population and one-third of all homes owned TVs. Anyway, Kalanithi knew what he was doing and didn’t let a petty setback demotivate him, and after little efforts, Kalanithi managed to get a transponder space from ATN and launched his channel.

But this was just the beginning, and there was yet a lot to be sorted! The state back then did not have cable operations; hence, Kalanithi literally had to change video shop owner’s minds to ask them to turn into cable operators.

But the man never took no for an answer and eventually went on to become the largest SCV (Sumangali Cable Vision) cable operator in the South.

Moving on, in the early days of Sun Network, he preferred to stay away from the limelight, and focused more on building the stably growing company.

Back in those days, even though private players like ZEE had begun to emerge but, the industry was largely dominated by the state broadcaster.

Hence, to play it safe Sun started-off with 3 hours of Tamil programs on ATN channel under the brand name of Sun TV.

Kalanithi had since the beginning understood that, for a Tamil TV channel, unlike otherwise – distribution is king, not content. Keeping that in mind, he had gained and maintained a stranglehold over cable distribution in Tamil Nadu. This was one of the factors became the primary reason which led to the humongous growth in Sun’s dominant market share in the times to come.

In no time, the network began to receive popular response, which led to streaming of 24 hours television channel in Tamil, Telugu, Malayalam, Kannada and Bengali languages, which then further expanded to news, movies, music and so on.

But the biggest break of the company came in 1998, when India liberalised the satellite broadcast industry. Quickly Sun Network managed to become one of the firsts to bag the licence. And, since then the line on the graph has just gone up and up!

Now during the phase from 1996 to 2002, Kalanithi’s family had managed to be the ruling party in the state and also had a strong presence & control over the national-level politics as well. Due to this, many critics ignoring Kalanithi’s hardwork pointed that, it was due to his family’s power is why the growth had become so rapid for Kalanithi. But like always, he didn’t care for what people had to say and did what he was good at!

On November 23, 2003, Kalanithi’s father Murasoli Maran passed away. Subsequently, Kalanithi was offered the DMK Party ticket for the Chennai Central Lok Sabha constituency for the 2004 elections by Karunanidhi his granduncle.

But his heart and mind by then were set on business. Hence, without giving the offer much thought, he politely refused, which in turn was then given to his brother Dayanidhi. He officially had stated to Outlook magazine in 2000 that – “I have no inclination or interest in politics. I only observe politics.”

Moving on; Kalanithi listed his Sun Group on the stock exchange in 2006, to raise around Rs. 600 Cr. for launching new TV channels, FM channels and to finance the construction of his new corporate office.

While at it, he also came across a few hurdles! When they filed the IPO (Initial Public Offering) document with the regulator; a Member of Parliament from the BJP Party wrote a letter to the Prime Minister’s office raising questions about Dayanidhi Maran’s conflict of interest, who at that time was the Minister for Communication and Information Technology.

But this was just a stepping stone, the real threat to the company came in 2007, when the political influence of his family that used to help him, turned against him.

During that time, Karunanidhi was the Chief Minister of the state, and his followers had become very angry at his newspaper’s report which claimed competing political ambitions of the Maran family, and even created a ruckus at the newspaper’s office.

To laid ground to a fresh rivalry between the two families! And Karunanidhi’s family started their own Channel called Kalaignar TV and further went on to start their own Cable TV Distribution Company as well.

When they thought that things couldn’t get any worse is when, a criminal case was filed against Kalanithi by Jak Communications, an Azhagri (Son of Karunanidhi) owned Cable TV Distribution Company in 2010.

During this phase, many believed that Kalanithi’s career was over, but he understood that time was not in his favour and kept mum. He patiently handled all the difficulties that were thrown upon him.

As time passed, and as the tide calmed down, things started to get better and he again managed regained his dominance in the industry.

It was perhaps his business acumen, which helped him make his way through the difficult times, to again make Sun Network one of the dominant names in the media and entertainment industry in the country.

And yet again, he bounced back with the biggest of the bets he had taken so far!

In the late 2010, Kalanithi paid Rs 750 Cr. to buy a 38% stake in SpiceJet Airlines from an American private equity investor Wilbur Ross and the UK-based Kansagra family, which in the next few years increased to 53% stake by investing another Rs. 800 Cr.

This was an unlikely move by Kalanithi, given the fact that, the whole world had written off the aviation sector. To which his belief was that, what had happened till now was the worst, and from here onwards there can only be an upside. And that’s exactly what happened.

In the next one year the industry actually bounced back!

Kingfisher grounded their services and folded up and fares improved. As a result of which, Airlines like SpiceJet gained tremendously, and thus Valuations improved as well!

He managed to run the Airlines for four long years. During this phase, his airline business again went down and, but this time, it went down drastically. He somehow managed to keep it going for a long time, but since he could not see any way out. Since it was on the verge of getting grounded, after incurring huge losses, Kalanithi had to let go of his trophy asset – SpiceJet. And in January 2015, Kalanithi sold the airline at an undisclosed price, to Ajay Singh, one of the original owners.

Since the time he started his career and till date, Kalanithi has faced numerous criticism from various people of the society, but he has always let his work speak for itself.

And now even after the cord of SpiceJet was cut, Kalanithi still owns more than 75% of the profitable Sun Group, which recorded revenues worth Rs. 2,097 crores and profits worth Rs. 717 crores in 2013-14.

Sun Group which started-off in his home-ground has stretched much beyond to 27 countries, including the US, Europe, Singapore, Malaysia, South Africa, Australia and New Zealand. Today it holds a bouquet of 33 channels in four languages, and reaches out to more than 95 million households in India. Additionally, they also possess 48 FM radio channels, two Tamil newspapers and four magazines.

Dinakaran, a morning daily in Tamil owned by Sun Group, holds a daily sale of 1.2 million copies. Sun Direct, their DTH wing has more than 5.5 million subscribers. Sun Pictures, their film production and distribution wing has released 15 movies till date. And Sumangali Cable Vision (SCV), their cable distribution wing is the largest of its kind in the South.

Other than that, the company also owns the Indian IPL cricket team ‘Sunrisers Hyderabad’.