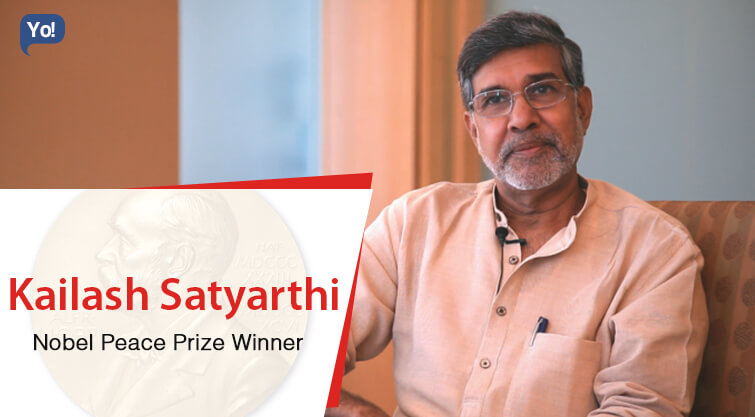 Who Is Kailash Satyarthi?

Born as Kailash Sharma on the 11th of January 1954; Kailash Satyarthi is the man who recently was awarded with the “Nobel Peace Prize of 2014”, which he shares with Malala Yousafzai of Pakistan.

He is known to be a hardcore children’s rights activist and against child labor, who has highlighted child labor as a grave human rights issue.

He is one of the very few civilians who’s works have been covered by mostly all the prominent magazines, television channels, newspapers, and radio documentaries from all over the world.

He has aggressively pointed out that child labor does nothing but pushes forth poverty, population growth, illiteracy, unemployment and many other social problems. These claims of his have also been supported by several studies too.

In his 34 years as an activist, Kailash has managed to free tens of thousands of young children from forced labor, who are forced into slavery by the evil men like agents, businessmen, landowners, brothel owners, etc, of our society.

Today, Kailash serves as a member of a High Level Group that is formed by UNESCO on ‘Education for All’ which comprises of Presidents, Prime Ministers and UN Agency Heads.

Other than that, he is also one of the very rare civilians who have been invited to several Parliamentary Hearings and Committees in USA, Germany and UK and who have got the opportunity to address the –

It is because of his undying efforts and hard-work that has forced the International Labor Organization to adopt the Convention No. 182 on the worst forms of child labor. And today this has become a principal guideline for governments around the world.

Trivia: – Kailash has dedicated his Nobel peace prize medal to the Indian Nation and is kept at the ‘Rashtrapati Bhavan’ (president’s house) museum. The medal is 18 carats gold and weighs 196 grams.

What Led Him To Leave His Career To Become A Full-Time Activist?

Kailash and his commitment to becoming an activist go way back to the age of six!

He was born with the last name as Sharma, to a Brahman police officer and a homemaker.

One day, he saw a young boy cleaning and polishing shoes outside the school with his father.

This was both – a shock and an eye opener for him.

Therefore, to help pay the school fees of underprivileged students like him, he formed a football (soccer) club, at such a young age to raise money. The club also used to campaign for the development of a textbook bank for these kids as well.

As he grew up, he joined the Samrat Ashok Technological Institute in Vidisha (Madhya Pradesh) and attained an Electrical Engineering degree in 1974, post which he then went on to teach at the institute for two years.

In 1977 he moved to New Delhi, where he started working for a publisher of literature for Arya Samaj (a Hindu reform movement).

Later, to distant himself from the caste system, Kailash changed his Brahman (or high-caste) surname of “Sharma” to “Satyarthi.” The name was derived from ‘Satyarth Prakash’ (Light of Truth), which was a volume written by Dayananda Sarasvati, who is the founder of Arya Samaj in 1875.

Dayananda was very well-known to urge for reforms such as – the abolition of the caste system and child marriages, and preaching of Hindu Vedas.

Kailash was highly motivated and inspired by his principles, and had also established a magazine called – ‘Sangharsh Jaari Rahega’ (The Struggle Will Continue). This magazine documented the lives of vulnerable people.

Now during this phase, he had become increasingly worried about the prevalence of child labor in India.

So in an attempt to do something about it, Kailash started working under the support and guidance of ‘Swami Agnivesh’, who was also a follower and activist under Arya Samaj, who advocated on behalf of women and children.

But after a brief period of working with him, Kailash had to part ways with his guide because his activism was more on the lines of religion, and Kailash had something else in mind.

Nevertheless, considering this as an opportunity, Kailash decided to quit his career and founded the non-profit organization – “Bachpan Bachao Andolan” (BBA – “Save the Childhood Movement”) in 1980. 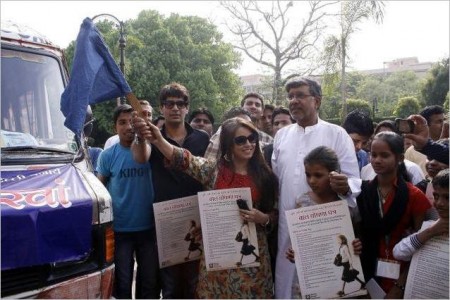 How Did He Take His Activism To A Global Scale?

While he was at it, he also solved the issues and retained his relationship with Agnivesh, post which, he founded the more legislatively focused “Bandhua Mukti Morcha” (Bonded Labor Liberation Front) in 1981.

BBA was more of a radical wing which had an aggressive confrontational approach. Their target were guarded brick and carpet factories, which they often raided (often accompanied by police) to liberate children. These children had been forced to become slaves by their parents in exchange for loans, or were enslaved by their parents to lenders who were hoping to recover their losses.

In a matter of a decade, Kailash had grown big enough to open several ashrams, to help these children further to regain control of their lives and to begin their educations.

But Kailash didn’t end there. He also managed to push forth the movements towards international cooperation as well, and eventually his efforts led to the formation of the “South Asian Coalition on Child Servitude” (SACCS) in 1989. This was a collaboration of several NGOs and unions in nearby Bangladesh, Nepal, Pakistan, and Sri Lanka. 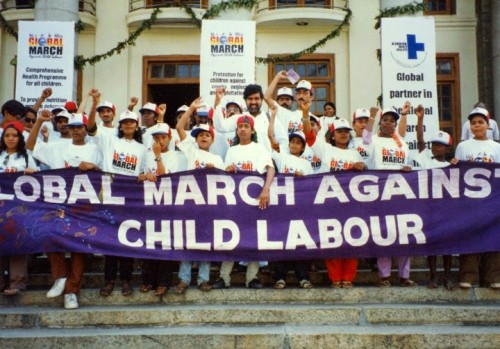 Moreover, Kailash went a few steps ahead and also successfully managed to initiate a “Global March Against Child Labor,” in 1998. This was a process wherein a series of  demonstrations and marches by more than 7 million participants spread across roughly 100 countries, had taken place.

The motive behind the Global March was to push the world governments to eliminate child labor by questioning, attacking and changing the nerve of every system that forced these helpless children to work at any level.

Basically, the key agenda of this worldwide movement was to force all the governing bodies and the United Nations to bring about policy changes to help support these children.

The impact of this movement was so much that it resulted in the passage (1999) of the Convention Concerning the “Prohibition and Immediate Action for the Elimination of the Worst Forms of Child Labor” by the International Labor Organization (ILO) of the UN.

In the same year, Kailash also managed to co-found another wing called “Global Campaign for Education”, with an agenda that education was a universal human right. This campaign was such a huge success that it led to the formation of “UNESCO High-Level Group on Education for All”, and Kailash was also named as a founding member of the group.

Around the year 1994, Kailash had also launched “Good-Weave International” (earlier Rug Mark), which was an initiative to certify that carpets had not been manufactured by children. The idea was similar to any other credibility certification mark like ISI, ISO, BIS, etc!

And to ensure strict compliance, independent Good Weave inspectors used to make surprise inspections of each loom. If these inspectors found children working there, they would offer them the opportunity to go to school instead, and employers would lose their status with Good Weave.

Now while all this was happening abroad, Kailash also launched a program called – “Bal Mitra Gram” (BMG), a program for “child friendly” villages in which child labor was banned and all the children were enrolled in school. Since its launch in 2011, more than 350 villages have adopted this idea.

Other than that – over the period of time, he has also participated and / or formed numerous such initiatives or organizations globally. Not only does he serve on the board and committee of several international organizations including the “Center for Victims of Torture” (USA), the “International Lab our Rights Fund” (USA), the “International Cocoa Foundation”, “Fast Track Initiative” (now known as the Global Partnership for Education), etc., but he is also a member of a UNESCO body which establishes to examine this as well.

Over the period of time, Kailash has managed to save and free tens of thousands of children and has also successfully acted to protect the rights of more than 83,000 children from 144 countries as well.

For all these efforts of his, he has been conferred with a long list of awards, out of which the most notable one remains the “Nobel Peace Prize of 2014” for his struggle against the suppression of children and for their right to education.

What is even more notable is that, Kailash is the 5th Nobel Prize winner for India and is also the only 2nd Indian winner of the Nobel Peace Prize after Mother Teresa in 1979.

In his recent activities, Kailash is now reportedly working on bringing child labor and slavery into the post-2015 development agenda for the United Nation’s Millennium Development Goals.

More recently in June 2015; while speaking to a large number of child right groups and organizations at the Lincoln Memorial, Kailash has also expressed a strong request to all the leaders and countries for the global elimination of child labor and slavery. He has called for achieving total freedom for the children from slavery, labor, abuse, trafficking and illiteracy, across the world.

What Are The Dangers Of His Work?

When you fight from one side, the other side automatically becomes your enemy. Similar is the case with Kailash and his crusaders.

His movement, which although aggressive, but equally non-violent and lawful, has been at the front-end while raiding factories, mines, warehouses, etc., to boycott child labor. Such movements have not only brought about global media coverage, legal and political interventions, etc., but have also managed to anger the powerful businessmen, who have a lot to lose.

In efforts to silence his voice, there have been many attempts to end his life, but he has always been lucky enough to escape all the time.

One of the most organized attempts to eliminate him happened in 1995, when one of the members of the carpet mafia lost an export order worth $7 Mn from a German firm on the alleged use of child labor, because of him.

Not only did his office staff and family members face the rage, but the exporter using his muscle power, managed to get him arrested on false charges and was also kept in police custody in Delhi. And even though, his lawyers did manage to get him out on bail, but the case is still going on at the High Court in Chandigarh.

Other than that; in 2004, Kailash and his colleagues were again attacked while rescuing children from the clutches of a local circus mafia and the owner of Great Roman Circus.

Kailash along with his son and fellow activists were brutally beaten up, but somehow, again managed to miraculously escape this pre-planned attack as well.

In his 34 years as an activist, he has faced many attacks, beaten up many-many times, death threats to him and his family, break-ins, burning of his offices and home, etc.

He has even got his legs, head, back, shoulder, and many other parts of the body broken, while trying to rescue children. He has even lost two of his colleagues, of which – one was shot dead, and one was beaten to death. But nothing of these has even remotely succeeded in deterring him from his chosen path of truth, freedom and justice.