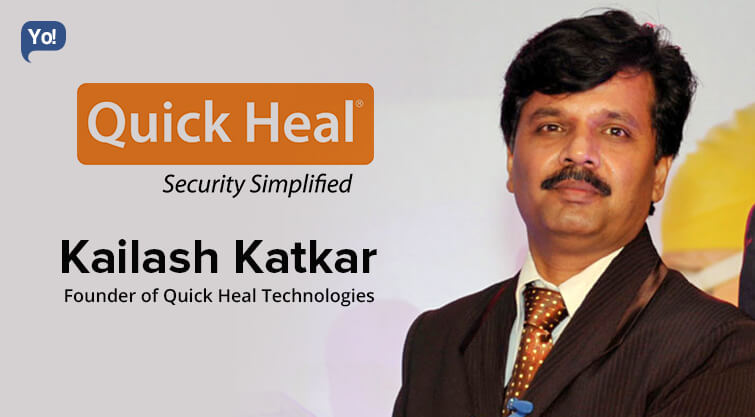 Born on the 1st of November 1966; Kailash Katkar, a lesser known name is the Founder of the Rs. 200-crore+ Quick Heal Technologies.

It is also known to be one of those very few companies who has managed to not only out beat its competitors like MacAfee and Symantec in its homeland, but has also succeeded in giving them a run for their money in their own neighbourhoods a.k.a. the US and other countries across the world.

To add to that, Kailash is also the initiator of the “Rotary Cyber Safety Initiative“, a series of awareness workshops which brings together cyber security experts, law enforcement authorities and academicians on a single platform.

The Early Life Of A School Dropout!

Kailash was in a typical Maharashtrian family that too in a small village of Rahimatpur in Maharashtra. Later, he grew up in Pune, where his father used to work at Philips as a machine setter.

Being at such a mediocre position at a time when India as a country was also going through a hard time, it was pretty much a given that Kailash had to dropout of his studies soon after he completed his SSC (10th Grade) around the mid-80 s, primarily due to family circumstances.

To help his family financially; Kailash then took up a job at a local radio and calculator repair shop. Additionally, with focus completely on technical matters, he also went on to learn the repairing of the then popular office gadgets.

At the age of just 19; he was later sent to his other shop in Mumbai by the owner for two- month training, after which he began working with him at his Pune shop for a salary of Rs1,500/Month. Over the period of next five years, this job gave him immense knowledge and experience of fixing calculators and radios, and the functioning of a Business in general.

In 1990, Kailash thought he was ready and felt that this was the perfect moment to take the entrepreneurial leap, to start his own calculator repair shop. Having said that, along with a seed capital of Rs. 15,000 from his savings, Kailash rented a small 100 sq ft office in Pune and started a one-man venture.

In the first year itself, the company managed to gain a decent income of Rs45,000 (in those times). But even with this polite success, Kailash yet was not satisfied.

Hence, to expand his portfolio, he began upgrading his skill-set and began reading and attending short computer courses.

The Journey Of Quick Heal!

After about a year-or-something while continuing the calculator repair shop; he again transformed into a new venture called CAT Computer Services in 1993 with an office based in a small one-room electrical device repair station.

Now even though he did begin the new venture, the problem was that because he did not have the relevant experience or for that matter the qualification, generating business had become far more difficult that he imagined.

However, without losing the hope and will, he kept his efforts at his maximum and pitched customers aggressively. And these efforts turned fruitful when he got his first break a few months later and two families signed up for the maintenance of their personal computers for an annual fee of Rs.2,000 each. And banking on these new found clients he began getting more clients as well.

A few months later in September, he also managed to break-in to the corporate world by winning the annual maintenance contract for New India Insurance, which was soon followed by another group a month later.

And by the end of the first year, the company had made a more-than-decent turnover of Rs. 1 lakh.

Now goes without saying that, the growth was smooth and towards and upward scale, but Kailash could clearly see that the wave was slowly turning in the favour of computers. And to capitalize on this foreseeable future, he acquired the skill to fix computers and was soon seen signing Annual Maintenance Contracts (AMCs) to maintain these machines.

While at it, the world had also entered the phase of ‘viruses’, and these were the times when virus used to travel from a floppy disc to a computer, and not for stealing the data and using it for financial gains or any other motive, but just screwing the system.

So to help their clients, he brought in a standard solution wherein although there was no particular tool or concept of removing the virus, but they reformatted the computer.

He had also managed to see a future pain-point which would only evolve and become grave for the masses. Since the internet was becoming popular, it only meant that the computers would be at great risk and would create multiple channels for viruses to reach the machines.

So he then began working on a definite solution for the same.

So on his insistence, Sanjay started developing a basic model of antivirus software for CAT Computer Services.

They called this antivirus – Quick Heal!

The extended plan that lied behind the scenes was that, back in those days, almost all the other businesses involved in computer maintenance used to face this problem. So this software would not only help him and his customers and would help other competitors at large as well, and there would be plenty of takers for cheap and simple computer security solutions. 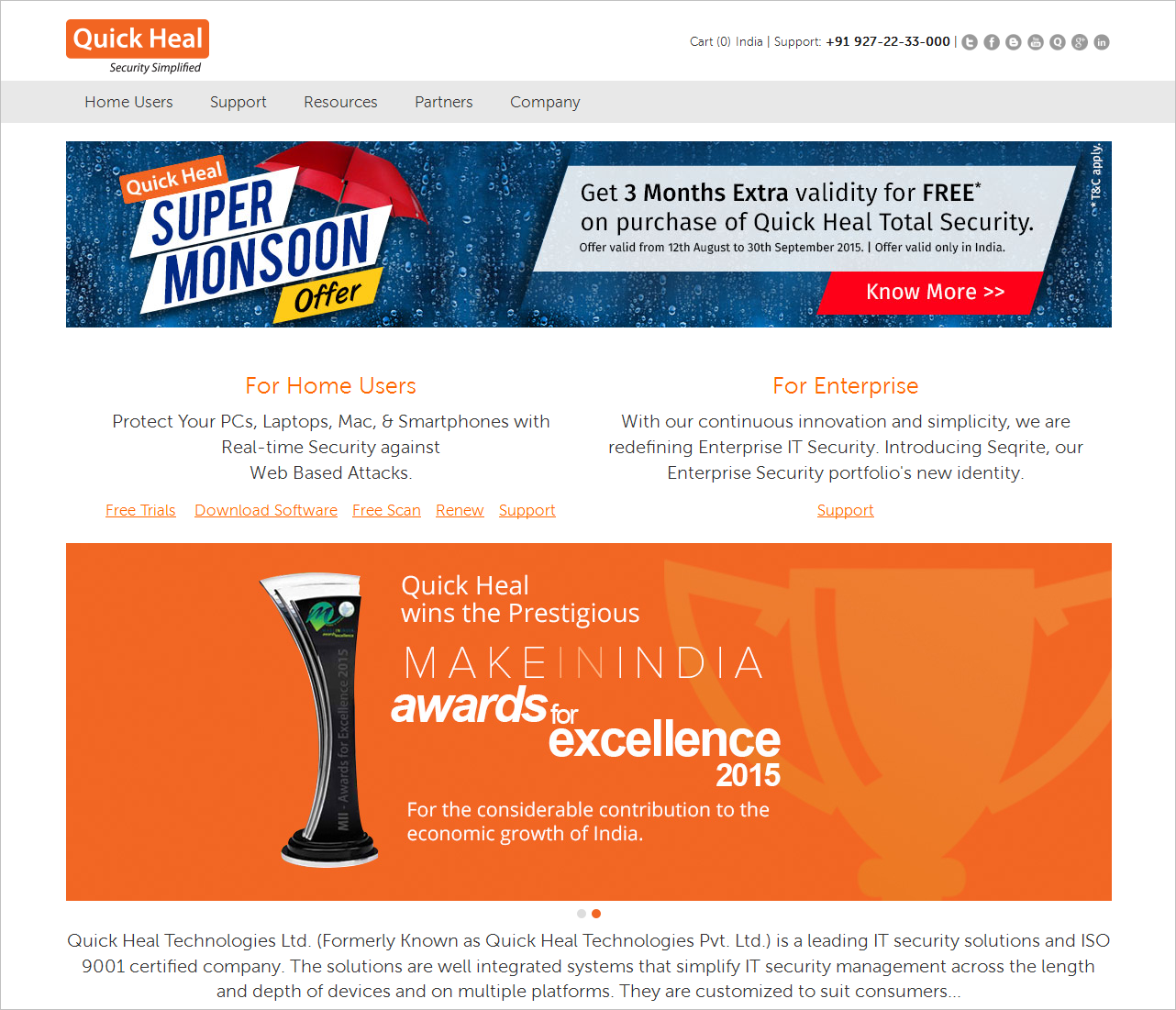 Moving on; in 1994, finally, the first Quick Heal anti-virus for DOS was released and no prizes for guessing, it broke open the new market. This version was then followed by Win 3.1 in 1995 and Windows 95 in 1996 as well.

The beauty of their antivirus was that, at a time when 10 other competitors were vying for market share, Quick Heal was offering their product to other vendors for a fee of Rs. 700, making it one of the cheapest yet with the best quality options. But the problem was that, for various reasons nobody was willing to pay for it.

So the duo decided to distribute the antivirus for free along with the computer AMC, and also circulated it among their network within the industry.

And then came the turning point, the deadly viruses – One Half and Natash! Quick Heal was the only antivirus that could decrypt the files they encrypted, and even global big names in the antivirus business were not able to match up to the task. This is when they began capitalising on the situation.

Word has it; the anti-virus software soon became a huge hit making them an overnight success. And also and gave them a turnover of Rs. 12.19 lakhs in that year, which was three times more than that of the previous financial year.

Since then there has been no looking back for the company. Some of the major developments made by the company till date, are mentioned below –

– In 1998 the company launched their corporate website called www.quickheal.com.

– Kailash also faced a huge crunch of funds. Since he was bad at marketing his business, Banks never really understood his work or concept, enough to take the risk of lending him money. Hence, he hired a distributor, who although raised the sales volumes, but was also stealing a cut from the sales. That is when Kailash built his own team and covered his financial crunch.

– Next year, the company expanded their area of focus and moved beyond from being just anti-virus solutions, to getting into the area of computer speed, mobile security and gateway level protection.

The uniqueness of this company is that, for the major part of their journey, they have managed to survive, grow and succeed without marketing and advertising of their products, unlike most of larger competitors. They have used that money to deepen their relationships with their 12,000-15,000 channel partners, distributors and retailers around India.

During this journey of theirs, they have also faced several setbacks and roadblocks, which have only helped them to evolve and grow further.

Around the same time, they had noticed that a huge chunk of their employees had begun to leave the company, because they felt that their company was small and wasn’t growing or well-known.

That is when Kailash decided to use this as an opportunity and move to a more realistic idea and lose the ‘Maintenance Company’ tag. Yes, they did lose a few customers because they were short staffed, and suffered losses at a time when they were cash crunch and no banks were ready to support them as well, but the transition and the faith kept them going.

And today the company has expanded to reach to point where they have launched their version 16.00. This series helps its users with safe banking, secure Internet Surfing, and a better PC experience and has been designed to easily combat the dangers of online financial transactions such as paying bills, banking and shopping. 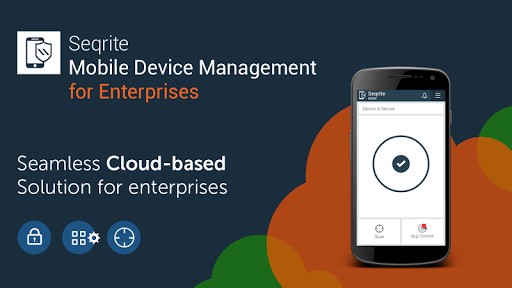 Seqrite aims at IT security solutions for business enterprises, which with its portfolio of security products aims to help the organizations to counter evolving threats, support new computing platforms and simplify security management.

The company has been receiving a 46% growth YOY, over the last three years since 2012, and has also announced its entrance in the North American IT security market, with an aim to target the small to midsize enterprises (SME).

Today the 1200+ employees company with more than 17 million customers across 112+ countries has transformed into a globally-known brand and the venture is also looking at the possibility of an IPO at a valuation somewhere around Rs. 2500 crore and ₹3000 crores.