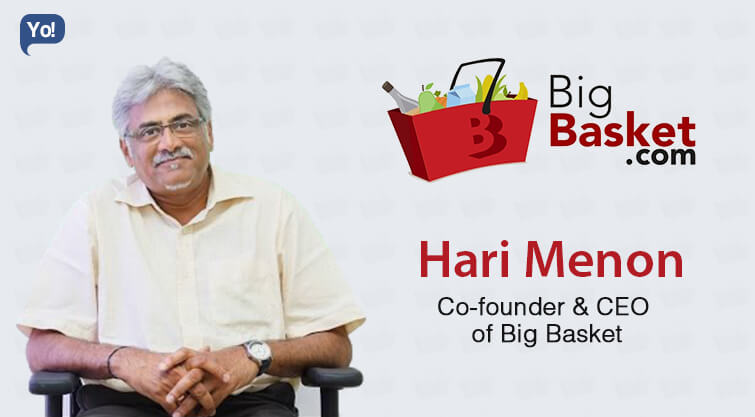 Going by the recent stats – the grocery retail market in India is seen to be growing at about 10% CAGR (Compound Annual Growth Rate) and is about $350 Bn in size. Whereas, the online end of this grocery market is expected to be about $10 Bn in the next 4 years. A large portion of business of this market is likely to be availed from the urban cities.

Hence, to capitalize on this growing segment, we have seen a rise in the number of start-ups such as – ZopNow, Aaram-Shop, Farm2Kitchen, Localbanya, etc… But the winner in this category remains – Bigbasket.com!

Let’s tell you the story of the company and the man behind it – Hari Menon!

Who Is Hari Menon And How Was Life Before Big Basket?

Born in 1963 – Hari Menon is the Cofounder, CEO and Head of Merchandising at Bigbasket.com!

Over the period of time, Hari had also been an integral part of quite a few companies. Prior to starting BigBasket, Hari along with the founding team of BigBasket had cofounded Fabmart, one of the pioneers in the e-commerce in India and its physical extension – Fabmall. And before venturing out with BigBasket and Fabmart, Hari was the CEO of ‘Indiaskills’ – the Vocational Education Joint Venture between Manipal Group and City & Guilds (UK), as well.

A lesser known fact is that, Hari had also served as the Country Head at ‘Planetasia’ – which was one of the first Internet services businesses in India, and had begun his career with ‘Wipro’ as a Business Head in the Infotech business.

Personally, he considers himself to be a Music enthusiast, and also wishes to play in a band someday. He is also an avid cricket fan and a member of the ‘Karnataka Cricket Association’ as well.

Hari was born into a middle-class family that lived in Bandra, Mumbai, and was always taught to lead a live that gave him a settled live, a stable job, etc… It was the urge to experiment that pushed him to try out something new.

Lastly, Hari is an alumnus of BITS Pilani and is married to ‘Shanti Menon’ – principal of ‘The Deen’s Academy’ (Bangalore). She is also the daughter of ‘E Shreedharan’, the man behind the Delhi Metro.

What Is Big Basket?

To begin with – BigBasket.com is owned and operated by ‘Supermarket Grocery Supplies Pvt. Ltd.’!

With more than 14000 products and over 1000 brands listed on their catalogue – BigBasket is known to be India’s largest online food and grocery store. It offers a wide range of options in every category to provide you with the best quality products at the lowest prices which include – fresh Rice and Dal, Fruits and Vegetables, Spices and Seasonings, Packaged products, Beverages, Personal care products, Meats, and many more… 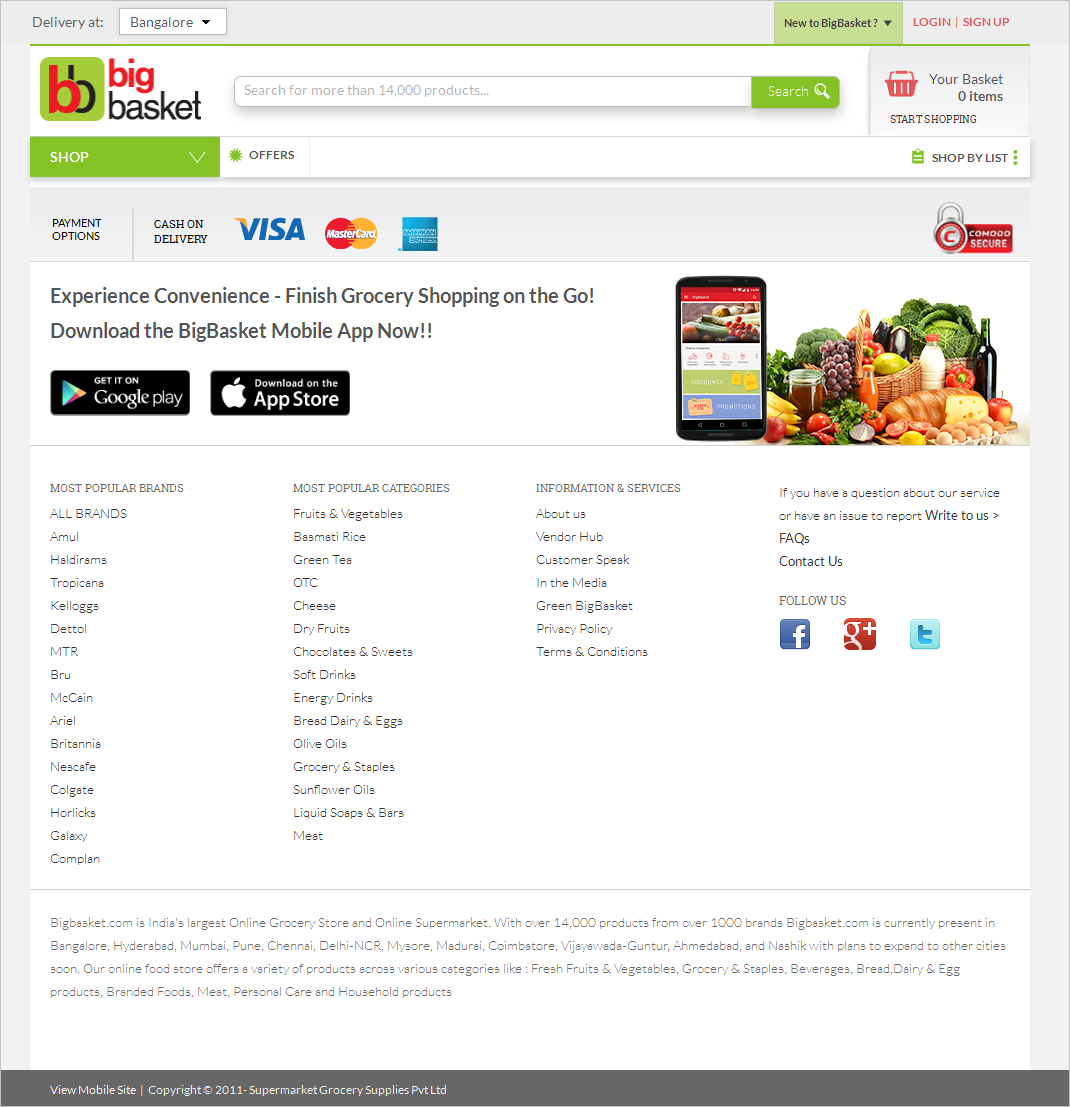 As of now, BigBasket is a purely internet based company and does not have any brick and mortar stores.

Ordering from BigBasket is also pretty simple. All you need to do is: -

1. Visit bigbasket.com and choose the products you wish to purchase

2. Add the items to your Shopping Basket

3. They offer 4 slots per day. Choose the most suitable delivery time from them. (Slot timings may vary depending on the cities)

5. And accordingly the products would be delivered to your house.

All the fresh fruits and vegetables are hand-picked, hand-cleaned and hand-packed in reusable plastic trays covered with cling.

A delivery for all the orders above ₹1000 is completely free of charge, while any order below that amount is charged ₹20 fee. The company personally takes care of all the deliveries and has a fleet of Omni Vans operating across cities to deliver products. And as far as the returns are concerned, they have a no questions asked return policy.

If they are unable to deliver the order within the given time duration, they will credit 10% of your order value to your BigBasket account.

BigBasket has effectively managed to attain and maintain their success by using various strategies which mainly surround three important factors: -

1. Unmatchable Customer Service (in all aspects)

2. A large variety of products

Now the grocery business in India is mainly divided into two types i.e. Planned Purchase and Top-up Purchase. The names itself are enough to explain what they mean, and need no description. BigBasket has designed their strategies and model, to cater to both the categories swiftly.

When BigBasket started their operations, it adopted the ‘just-in-time model’ – wherein not only perishable good but every item was brought against an order. In other words, they were purchased-to-order. In this model, the delivery boy directly picks up the item from the vendor, and directly delivers it to the customer.

They still use this model for quite-a-few items like Bakery items, Pet food, Small household appliances, etc. which are not feasible to store.

Over the period of time, as their business grew, they moved on to an ‘inventory model’ (for most of its products), and BigBasket now buys products directly from suppliers like – HUL, P&G, farmers, mills, etc and then stocks these in warehouses. BigBasket then adds a margin to the purchased price of the product before selling them.

But BigBasket also sources many of its products locally as well as nationally. Some items like onions, oranges, apples, etc. are purchased nationally from their major producing locations; while, many other items are sourced locally from ‘mandis’ (markets) or local farmers. This depends on the product and its surrounding factors.

They have a completely automated process of initial inventory stocking and post its completion, re-ordering! The company uses analytics to predict their weekly demand, with the help of which they optimise their logistics and supply volumes to drive better margins.

This ‘Single-point stocking’ greatly helps the company to strictly manage the shrinkage and rejection of products, and also helps them to invest the saved money in advertising as well.

Now looking at their strategies – a grocery business (that too an online one), unlike many other sectors, deals with many constraints (in different ways) due to which must be expanded city-wise.

It deals with many perishable products which have a short life, plus the needs and demands of the consumers also change from city-to-city.

Hence, it is of utmost importance to create a strong Supply-Chain network and develop links with large suppliers. This strategy has helped BigBasket maintain its operational superiority.

It has also helped them greatly, in offering a wide range of products at competitive prices in a low margin industry.

More recently, BigBasket has been seen adopting a Hyperlocal strategy, wherein, it has partnered with more than 1,800 neighbourhood grocery stores across India to deliver goods in under an hour. 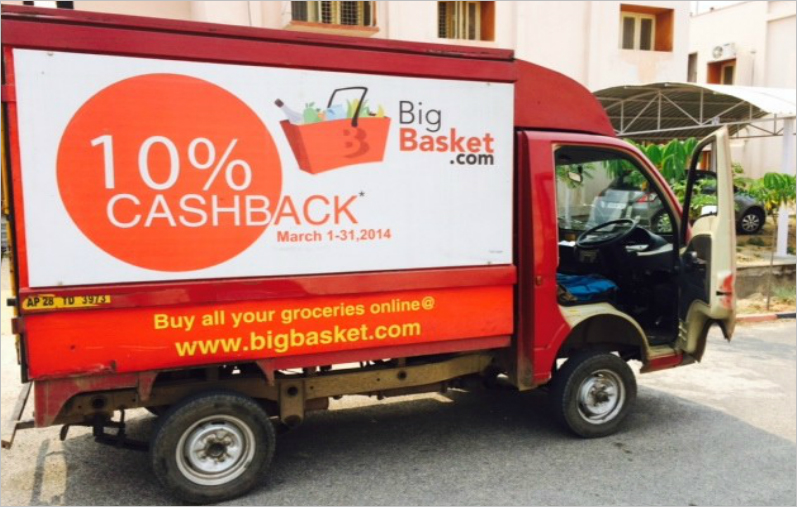 These stores are also used as pick-up points for customers as well.

What Is The Story & How Has Their Growth Been So Far?

It all began in 1999. Hari Menon along with five of his friends – VS Sudhakar, Vipul Parekh , Abhinay Choudhari  and V S Ramesh launched their online retail website called ‘Fabmart’.

Even though they did manage to get some traction but since their idea was way ahead of its time, they could not shake the masses. And to worsen the whole deal, the dotcom bubble burst happened.

That is when they decided to put the online business on the backseat and focused all the energies on ‘Fabmall’, their physical retail chain of grocery stores. They also merged this chain with another grocery retail chain called – ‘Trinethra’.

Anyway, in a matter of seven years, they expanded their business to 200 stores across Andhra Pradesh, Tamil Nadu, Karnataka and Kerala. Around the same time, they also decided to sell-off the business to Aditya Birla Group.

That is when they thought of getting back to their original idea online grocery store. As their discussion deepened with serial entrepreneur Krishnan Ganesh, they concluded to go ahead with it. The idea was collectively seeded by serial entrepreneurs and angel investors Krishnan and Meena Ganesh.

And finally in December 2011, they launched BigBasket.com! 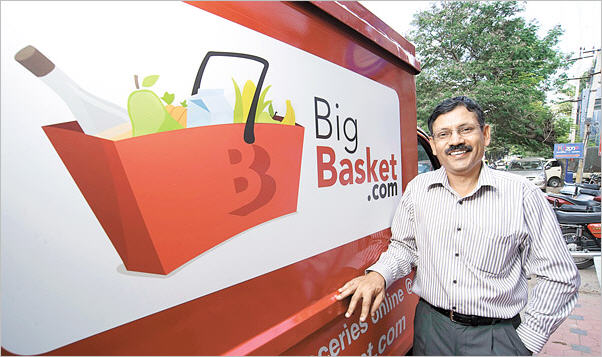 Soon after the launch, they also received their first funding of $10 Mn from ChrysCapital co-founder Raj Kondur and Ascent Capital. He had earlier invested $4 Mn in Fabmart as well.

According to Hari, the first six to nine months were the most challenging ones. Since they had already faced the heat once with Fabmart, the pressure was even more. The biggest challenge for them was to create and maintain a building capacity to meet customer demand.

This was even more commendable, since they were barely advertising about the brand and mainly relied on word of mouth. As per their stats, more than 45 % of their customers came through references.

By the next one year, they had already expanded to Hyderabad and Mumbai, and were also planning to further increase their services in Delhi, Chennai Pune, Ahmedabad and Kolkata as well.

These numbers further increased in 2014. They had now crossed a Million orders being delivered, and had also expanded their team to 1000 people, who were now handling more than 200,000 customers spread across three cities, with 5000 orders a day.

They closed the FY14 with revenues worth ₹210 crores!

Talking about the present year – BigBasket now processes almost 20,000 orders per day, and has a team of 2000 members.

They have also acquired a Hyperlocal delivery start-up called – ‘Delyver’, to further strengthen its delivery service. Although, the company still functions as an independent entity, but the cofounders of Delyver have also been included in the management team of BigBasket.

Going by the experts, this acquisition will greatly help BigBasket in their Express Delivery model, to delivery groceries in one hour.

Moving on, around the mid of 2015, BigBasket also roped in Bollywood actor – ‘Shah Rukh Khan’ as their brand ambassador, for an undisclosed sum; following which, they also launched a high volume television, digital and print media campaign as well. 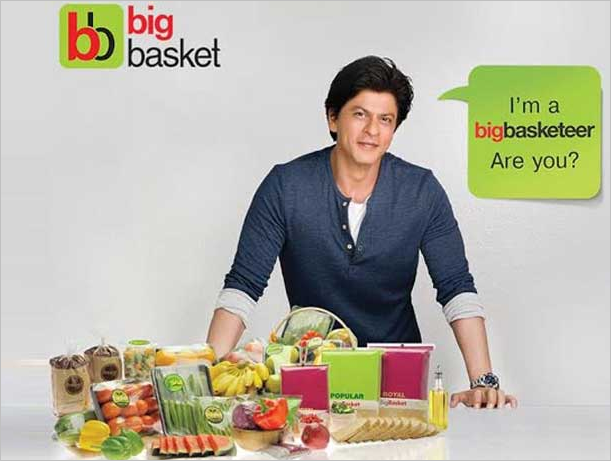 They are now operational in seven cities which include six metros, and are also in plans to expand to two more metros and 50 tier two cities soon. They will also be opening 8 large warehouses in metro cities.

As per the filings submitted with Ministry of Corporate Affairs, BigBasket is now valued at around ₹2,100 crore ($320 Mn). They now cater to more than 450,000 with a monthly order growth rate of more than 30 %, and are also expecting to close this fiscal with a turnover of around ₹250 crores.

With the recent developments (and the ones planned for the future), the company is targeting an increased turnover to ₹800 crore by the next year, and also aims to break-even in the next two years as well. They are also in the final stages of closing a $120-million round of funding to achieve their goals.

Commendable. Wishing all the best for sustaining in stiff competition