Most businesses or should we say “most ideas” succeed because they resolve some sort of pain point but you may not find it difficult to locate a few successful business models who are nothing but just “cool”. For example: Twitter, Instagram, Whatsapp, etc!

Presently, HU a.k.a Happily Unmarried is a fun lifestyle brand from India which is known for its unique India-centric gifting designs which range between categories including apparels, travel, office stuff, accessories, stationery items, glassware, etc! What differentiates them from the crowd is their witty word play which is usually picked up from our daily lives. These products are then sold to customers through various channels such as their own outlets, multi-brand outlets or / and online. 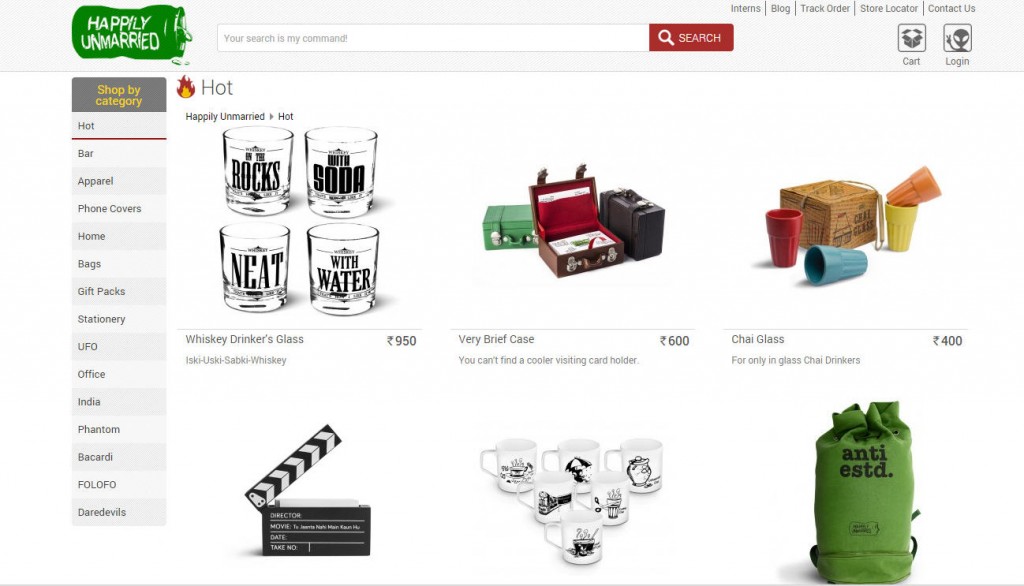 Anyway in 2002, just after the Dot Com burst happened which left these young chaps out of jobs that to from a company which hadn’t paid them for the past six months. It was time to urgently search for a new reliable job but instead they went with their instincts of starting a business. The only problem now was, Funds! Which apparently was zero and all they were left was with a silly laptop from the previous company. Very smartly they sold the same for approximately INR 50,000 and thus their company took off!

Initially in 2003, they started-off by providing a variety of services to the singles in the city and these ranged from helping with accommodation, furniture, curtains, rugs and floor cushions, etc! But to their bad luck it didn’t work for them and they faced many problems. The people they worked for were all unorganized and just were not worth the efforts and to top that the margins were also quite low too. This made them realize that their focused lied somewhere else and hence they moved to innovative gifting alternatives.

Now just like every business their first few years were hard on them too. Building your base after all is not a piece of cake, you see! Those were the days which went in understanding the business, the customers, the market and its trends, etc! Basically they were barely surviving and many-a-times felt like quitting. That was also because all the work from head-to-toe was being done by them because they didn’t have much money to hire full-timers, leaving them frustrated and exhausted.

They even didn’t draw any salaries for a while to keep the expenses balanced. During that phase they also realized that the customers weren’t coming back to them because they didn’t know them! So to remove that “unknown” tag, they used to land up at their friends offices with products in hand turning their lunch time into a mini-bazaar. And as their products were funny and creative, it didn’t take much time for them to get renowned. So to summarize their initial stages, all they did then was to create a brand the users or customers could relate to and with that they created a loyal customer base.

A small but effective turning point came when they bagged their first big client National Geographic channel, who wanted HU to supply corporate gifts to them. With the help of the money they got from them, they increased their product range. From here onwards HU brought about some significant changes which helped them grow to another level. These included organizing independent music festival called Music in the Hills in 2007, offering 120 different product designs, having completed a sale of more than 1.5 lakh SKUs, increasing their warehouse location from just Delhi to Goa as well, adding franchise stores to their kitty, increasing their base to offshore locations like France and United Kingdom and a lot more.

Now due to their sudden but not-so-sudden rise, their revenues grew too. In 2010, their annual turnover jumped to more than INR 5-crores, the online sales which accounted to just 10% of their total was also seen doubling @ 100% YoY. Besides these, HU was also seen trying their hand in new genres like corporate projects involving branding, communication, interiors, marketing, etc. for prominent clients like Malayala Manorama, NDTV Good Times, CNBC Awaaz, Radio Mirchi, Britannia, Vodafone, ESPN Star Sports, National Geographic Channel and Scullers.

The company also widely increased their base and apart from their offshore presence they expanded to 7 brand outlets across India which includes 4 outlets in Delhi and 1 outlet each in Goa, Shillong and Chandigarh. Along with these HU also had their presence felt through multi-brand outlets in 22 cities including Delhi, Mumbai, Jaipur, Kolkata, Lucknow, Nagpur, Pune, Ahmedabad, Surat, Chennai, Hyderabad, Bangalore and Thiruvananthapuram as well.

Although Happily Unmarried has not brought about many humongous changes but then again their products have always spoken about them. It may come across as a surprise to many of you that HU does not have any marketing budget and solely relies on social media. As a matter of fact, the 50K fans they have on Facebook are genuinely gained without any media agencies getting involved.

Also, due to their uniqueness they don’t hold much of competition from the market except from Tantra, People Tree, Quirkbox & Chumbak, which again are not directly related to what they are doing but are branches of the same tree.

The only major challenge that the company has faced since the beginning is to raise funds be it through personal loans, friends, family or venture capitalists. But somehow they have managed to overcome this and over the period of time they have successfully raised a total of INR 9.4 crores from Info Edge (owner of naukri.com), INR 5 crores in 2012 and INR 4.4 crores in 2014 giving it a 34% stake in the company.

Presently, the company has also been getting a lot requests to create products on the lines of our Prime Minister Narendra Modi’s “Make in India” and they plan to capitalize that area pretty soon. HU has also got another reason to celebrate as their revenues have crossed their INR 10-crores mark and has been drastically increasing.

On the other hand, their closest competitor Chumbak who has 65 kiosks along with 20 outlets across the country is aiming at 400-500 crores in revenues in the coming three years. Now going by what we see, although Happily Unmarried is nowhere even close to these figures but what will be interesting to watch is what will HU do next to stay at par with the rising competition.