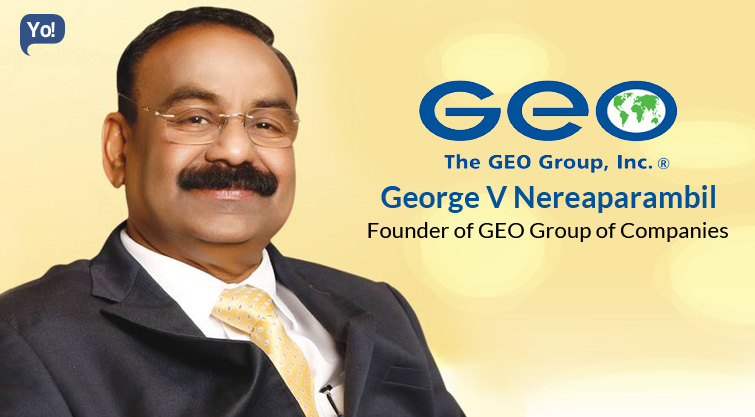 Who is George V Nereparambil?

George V Nereaparambil, or Georgetta, as he is proudly called by his friends and family, is the Indian mechanic-turned-businessman, who is recently attained a lot of limelight, for being the proud owner of 22 incredible apartments in the world’s tallest building Burj Khalifa!

Mr George is the founder of Geo Group of Companies – that is said to be one of the largest business firms in the Middle East which holds a diversified portfolio. But more on that later!

For George, business is in his blood and he thoroughly enjoys it, and is always up for a challenge. He believes that impossible is possible through dedication and hard work, and this is been proven by him by making the Cochin International Airport a reality.

Yes, George is the second-biggest shareholder in Cochin International Airport Limited (CIAL) with a 14% stake, and is the first Public Private Participation (PPP) model airport in India. The Kerala government is the airport operator’s largest shareholder.

When the Kochi International Airport Project was launched initially, there was no keen interest from investors, but soon the company had begun to face severe lack of funds.

George was quite familiar with the kind of problems the Keralities went through due to the absence of an airport. In fact, he himself could not attend his father’s funeral because there was no direct flight from Dubai to Kochi to reach his home-town Thrissur.

So, that is when he walked into their office and offered to invest in the project. Now CIAL is a very successful company running the international airport in Kerala.

Behind this dynamic personality of his, there also lies a philanthropist hidden in him, who keenly works on the upliftment of humans and humanitarian activities. George is also widely known for the many contributions made by him for the development and promotion of film industry by promoting young talents at the Cochin Kalabhavan Studios in his directorial ventures, as well. He also owns the Ragam cinema theatre at Trichur.

He has contributed massively to various social causes and charitable organisations in Kerala. In fact, he has also been nominated as the trustee of the charitable trust set up by the CIAL.

Talking about his personal like – George is married to the person he owes all his success and achievements to – Molly George; his ultimate moral support. She is also in-charge of the HRD at the company. The couple has two daughters and a son. The eldest daughter Geni Cybee is married to Cybee Paul and has two children, the younger daughter Gemi George is the finance manager of Geo Group, and their son Geon George is working as assistant manager in rental division.

Commenced by George V Nereparambil in 1977 –– the Geo Group that had started off as GEO Electricals, Contracting and Trading Company, today has diversified into a whole group of companies that offer several products and services. The company now has explored new horizons, have diversified into various business ventures, and have spread across four countries as well.

The companies under the group umbrella include: -

Other than these, they also offer Facility Management which includes, oriented on call services and yearly reactive and preventive maintenance contracts for commercial, residential and industrial properties.

Some of their field operations cover: – Electrical, Mechanical, Carpentry, Plumbing, Interior Fit-Out, and Specialist Services, along with HVAC Design, Installation and Maintenance including Cooling Towers, and Civil and Refurbishment Jobs.

George was born into a traditional business family in Thrissur! He used to help his father in running the business of trading cash crops.

People in his hometown used to trade cotton, but throw away the cotton seeds, not realising that you could make gum from those seeds, as well. At the young age of 11, he was making money by selling these disregarded seeds, and was making almost 90% profit doing so! He did the same with tamarind seeds too. He’d sell the empty shells on as cattle feed.

He came to Sharjah four decades ago and started working as an automobile mechanic. In no time, he noticed the hot climate of the region and realized that there was huge scope for an air conditioning business, and started the business of trading and maintenance of air conditioners and spare parts in 1977.

This further expanded to setting up of Geo Electrical Trading and Contracting Company which dealt in all brands of air conditioners and its spare parts, in 1984. Apart from these they also offered rental cooling and power solutions in the UAE.

This further diversified with the encouragement of the rulers of the UAE, and by 1996, the company had also established GEO Electrical Company as well. He further went on to: -

And today, with a staffing of more than 1000 employees, the Geo Group has transformed into an ISO certified company that provides quality products and services to the customers.

What is all the media hype about his property in Burg Khalifa?

As you might have already seen all over the internet, this Kerala-born businessman (George V Nereparambil) is believed to be one of the largest private owners of properties in Burj Khalifa, the world’s tallest structure.

It all started as a joke! One of his relatives had jokingly told him that – ‘See this Burj Khalifa, you cannot enter it’! He took that as a challenge!

After seeing an advertisement in a newspaper about an apartment for rent in Burj Khalifa in 2010; George rented the apartment the same day and started living in it from the very next day. He started off by living there as a tenant.

Over the period of time, because he had businesses in Dubai generating profit, he found Burj Khalifa to be an ideal investment option. That is when he purchased his first flat by investing some money that he made from doing a project for Dubai Metro.

Then he bought the second, third, fourth, fifth …and now 22nd apartment! And now, as of date, he owns 22 of the 900 apartments at perhaps the Gulf’s poshest address. Five of them are rented, and as for the rest, he’s waiting for the right tenant. He spends about 3 Mn Dirhams every year, just to maintain all his properties in Burj Khalifa!

Having said that – the hype is not just because of that!!!!

TURNS OUT – Indians own more than 100 properties in Burj Khalifa

The real estate market in Dubai is said to be in its rebound phase since the slump in 2008 and Indians seem to be on the top of the list, to be interested to invest in the property in the West Asia, especially Dubai.

Not only that, but Indians are said to be the #1 when it comes to buying property in Dubai. You will often see them buying, selling, and flipping properties regularly. Property is said to be one of the most favourite kinds of investment for Indians. This is also because the depreciating rupee is no dampener there!

Prominent Indians who have acquired properties in Burj Khalifa include — actors Mohanlal and Shilpa Shetty, Raj Kundra (entrepreneur husband of Shilpa Shetty), lawyer Rohit Kochhar, and so on… Rohit, who set up an office in Dubai recently also has the option of inviting clients to the exclusive owners’ lounge on the 123rd floor.

Having said that – buying property in Burj Khalifa, is not just about popularity or a fancy address. There is a huge demand for rental in this building! George is said to have made a 50% profit on one of the properties too.