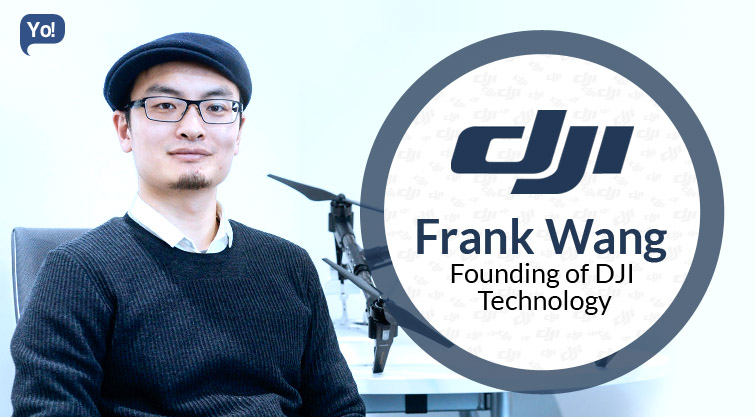 Who is Frank Wang?

The 57th Richest techie, 38th Richest Chinese and with a net worth of $3.6 Billion; Frank Wang is the world’s first drone billionaire.

A shy Frank, with circular glasses, tuft of chin stubble and golf cap that masks a receding hairline, who comes off as brilliant, cutthroat, philosophical, and yet remarkably grounded and measured, all at the same time ––– is the Founder and Chief Executive Officer of SZ Da-Jiang Innovation Technology, also called DJI, a privately held robotics company that hold estimated revenues worth $1 Bn and a valuation of $10 Bn.

DJI, as a whole controls 70% of the global consumer unmanned aerial vehicle (UAV) market share through sales of its trademark Phantom drones, wherein frank is said to own about 45% of DJI.

Interestingly, for all those unaware, there have been many incidents where DJI-made drones have made the headlines: one which being the crash-landing on the White House lawn, another one being – where the drone was used to land a bottle of radioactive waste on the roof of the Japanese prime minister’s office, etc…

In fact, DJI has also been in new for where the drones have been used to sneak drugs weapons, drugs and a mobile phone into a prison courtyard outside of London. But despite all the unintended publicity, the company has managed to maintain its superiority and credibility!

Started in 2006, and HQ’d out in Shenzhen in China – DJI, which stands for Da-Jiang Innovations, is primarily a drone making company. Many fans also call it the “Apple of drones, because of its 70% market share of consumer drones.

It is also known to be the first Chinese company to lead a global tech revolution! As of date, the company stands at $1.0 Bn revenues (2015) and with 4000 employees, operates divisions in China, Hong Kong, Japan, North America and Europe. 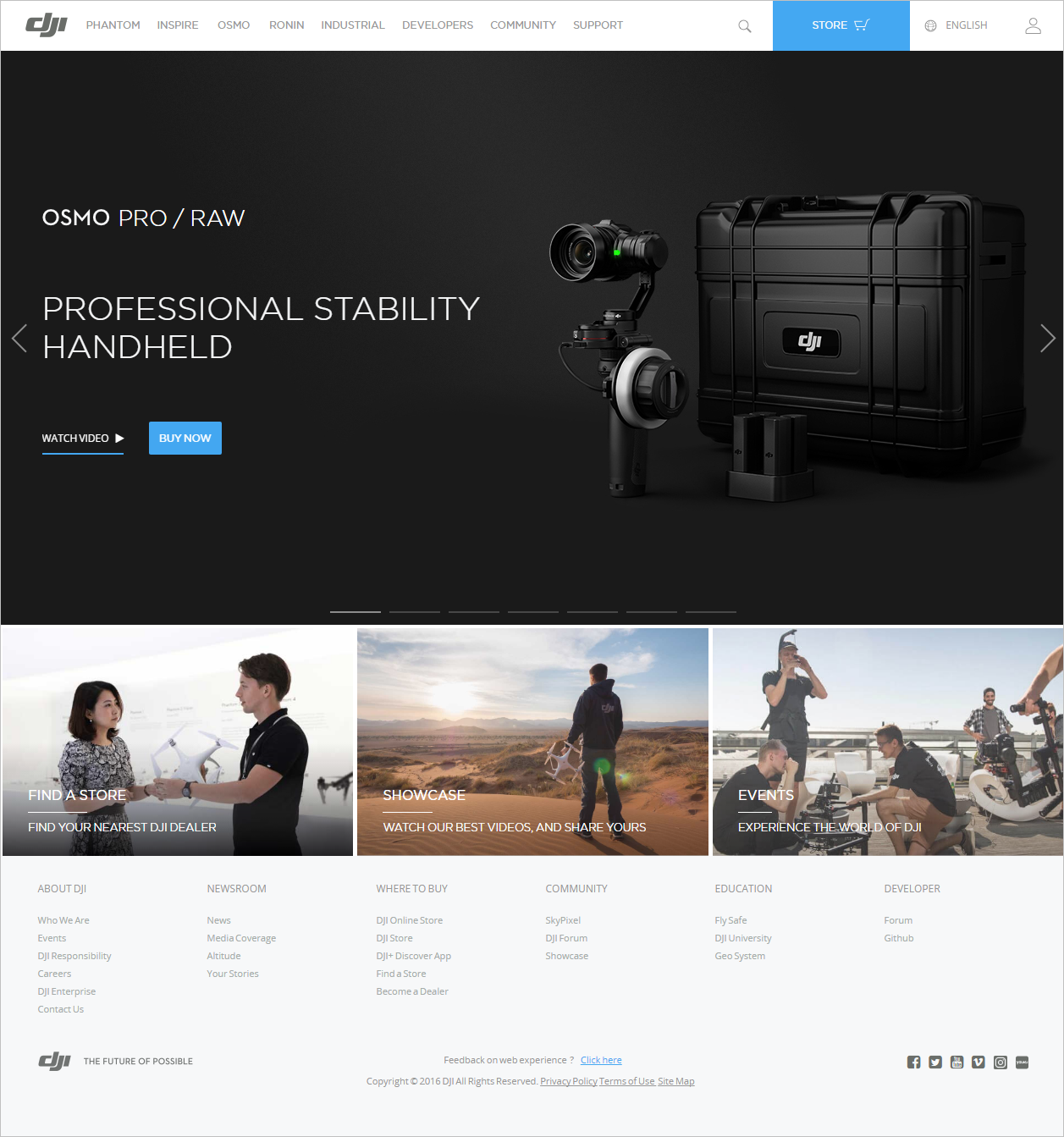 In fact – DJI has also developed its own cameras, stabilization mechanisms, motors and a “flight control system” — that also includes software to edit video and post it online.

DJI products are redefining industries, and professionals in filmmaking, agriculture, conservation, search and rescue, energy infrastructure, and more, make great use of DJI products to accomplish tasks safer, faster, and with greater efficiency than ever before.

The company is well known for its technical superiority in the industry! They make use of 32-bit microprocessors along with powerfully dedicated digital signal processors.

Additionally, they also make use of Aramballa! It is best known for making the chips that power GoPro cameras, and also supplies the processors that allow DJI’s cameras to capture and stream 4K video at high frame rates.

Other than these, DJI also works directly with MediaTek (Taiwanese chip designer) and WT Microelectronics, to provide you with the best of the best, as well.

This is how it all started!

Born in 1980, Frank grew up in Hangzhou, on China’s central coast, a place that once was Alibaba’s home city.

Frank was the son of a teacher turned small-business owner and an engineer father, and had developed a sense of love for flying objects, since the very beginning of his youth itself.

He used to spend most of his free time, reading about model airplanes, and always dreamt of having his own “fairy”, a device with a camera that could fly and follow him. Frank received his very first long-desired remote-controlled helicopter, at the age of 16 (which he crashed in no time).

Anyway, later, he joined the East China Normal University in Shanghai to pursue his further studies in psychology. But since he was so crazy about flying objects, and had spent much of his youth building toy models, frank had developed an obsession with helicopter drones.

He wanted to build a career in it! But due to his weak academic performance, there was no option of getting into American elites with the likes of MIT or Stanford.

Hence, rejected by his top choices, Frank dropped out of and had joined East China Normal University, and joined and ended up at the Hong Kong University of Science & Technology (UST) in 2003.

Although, he didn’t really find his sense of purpose for a while, but during his senior year, he managed to build a helicopter flight-control system, that too out of his dorm room, which led him to his true destiny.

His robotics professor Li Zexiang had noticed Frank’s group leadership and technical understanding, due to which he had brought the headstrong student into the school’s graduate program.

Frank devoted everything to his final group project! From skipping classes, to staying up until 5 am, he did it all! Although, the hovering function for the onboard computer he built, failed the night before the class presentation, but his effort did not go to waste!

He managed to complete the helicopter later!

Under the mentorship of Prof Li Zexiang, Frank managed to develop the unmanned miniature helicopter which achieved world’s first flight on Mount Everest by reaching nearly to the top.

This led to the formation of: Da-Jiang Innovation Technology – DJI!

Zhihui Lu was the youngest member of the team, who shut his own small company and moved to Shenzhen with only 100 dollars in his pocket to join DJI. Jinying Chen and Chuqiang Chen had also given up their existing jobs to join the team.

Interestingly, Chujiang Chen actually was charged a penalty of 30,000 RMB (about $4,600) for leaving the job he was in, while being under a 3-year contract. This earned him the nick name of “Thirty Thousand Chen” as he worked to pay his obligation, from the other founders.

The company had now moved from the college dorm to the manufacturing hub of China – Shenzhen! They had begun working out of a three-bedroom apartment with Frank funding the venture using what was left of his university scholarship.

He also made a video of the helicopter that he had made in college and posted it online, and sold it for a great deal of RMB 50,000 (about $6,000), to clients such as Chinese universities and state-owned power companies, which soldered them onto the frames of DIY drones. It only costed him RMB 15,000 (about $2,000) to make it! Those sales also helped them to pay for a small staff, as well.

By the end of the year 2006, DJI was selling about 20 controllers a month, and had also received angel funding of about $90,000 from Frank’s family friend Lu Di.

Fast forward two years! The year was 2008. DJI’s first drones well under development, and all other cofounders – Lu, Chujiang and Jinying, had left DJI within about six months, taking the newfound technology expertise with them as well.

What started as a hobby, had now turned into a full-fledge business!

DJI’s had started making more advanced flight controllers with autopilot functions, and were marketing at niche trade shows like a radio-controlled helicopter gathering in the 70,000-pop. town of Muncie, Ind. etc…

A new subsidiary by the name of DJI North America, had been formed with the help of Colin Guinn. The subsidiary aimed at delivering drones to the mass market. Colin held 48% ownership of the entity, with DJI retaining the remaining 52%.

In the next one year, DJI had put all the pieces together for a complete drone package: software, propellers, frame, gimbal and remote control.

Post that, the company unveiled its most ambitions – Phantom, in January 2013! This was the first ready-to-fly, pre-assembled Quad-copter that could be up in the air within an hour of its un-boxing and wouldn’t break apart with its first crash.

The simplicity and ease-of-use, led to the unlocking of the market, beyond obsessed enthusiasts.

DJI’s intention was to break even on the Phantom’s $679 retail price, but Phantom went on to become the company’s bestselling product, that too with very little marketing. This increased their revenue by fivefold.

30% of their revenues now came from the US, 30% from Europe and 30% from Asia, and the rest came from Latin America and Africa.

In May 2013, DJI also bought out Colin Guinn’s stake in DJI North America, and redirected all customer payments to China headquarters, as well.

DJI ended that year with $130 million in revenue!

By 2014 – after Sequoia Capital’s funding round, the company was now being valued at around $1.6 Bn, and also closed that year with $500 Mn in revenues.

Their sales had either tripled or quadrupled every year between 2009 and 2014, had also reached profitability and were now netting about $120 million in profit.

The company has now grown on to become the world’s largest consumer drone manufacturer.

In May 2015 – the company closed a $75 million round of funding from Accel Partners, at a valuation of about $8 billion. What was even more rewarding was that – DJI Phantom drone’s skyrocketing demand had earned itself a spot in the Apple Store in September as well.

More recently, with the opening of the US skies for commercial operators by the FAA (Federal Aviation Administration), had created room for more opportunities. In fact, FAA had so far approved ten times more DJI drones than its competitors.

The company had raised a total equity funding of $105M in 3 Rounds from 3 Investors including: Accel Partners, Lighthouse Capital Management (Shanghai) and Sequoia Capital. They have also made an undisclosed amount of investment in Hasselblad in November 2015 as well.

They were also in preparations to raise more funds in a new round, at a $10 Billion valuation, valuing Frank’s 45% stake to be worth about $4.5 billion. With the closure of this round, DJI’s chairman and two early employees are also expected to be billionaires as well.