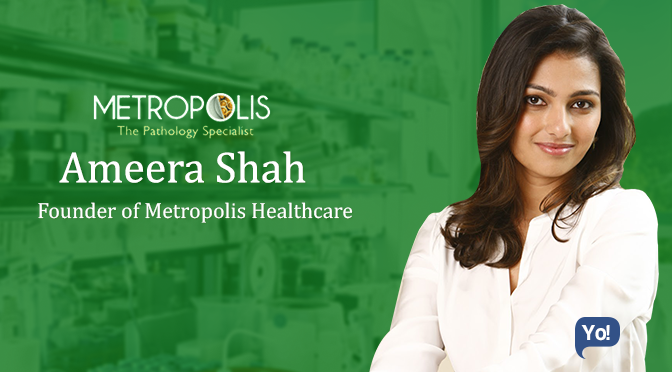 Born on the 24th of September 1979; Ameera Shah is the Founder, MD & CEO of Metropolis Healthcare Ltd – a multinational chain of diagnostic centers.

Under her leadership Metropolis Healthcare has become the first to create a sustainable business model for pathology and at the same time, the first one to cross in to emerging markets and has grown from a single pathology laboratory in 2002, to a full-fledge global chain of more than 125 diagnostic and over 800 collection centres which are spread across South Asia, Middle East and Africa.

It is because of her, that Metropolis has gained a reputation for itself by being able to implement global standards of quality in all its processes & systems. She is the only person who has successfully been able to bring about the revolution in the pathology industry, and quite frankly almost everybody has been benefited out of it.

Additionally, Ameera is also widely known to be a spokesperson and has also been featured as a speaker in various forums like industry events, conclaves, etc nationally as well as internationally. These include some of the most prestigious institutions across the globe like Indian Institute of Management (IIM) Ahmedabad, Harvard Business School, TED (conference), CII and many such reputed institutions.

Personally, she has completed her Graduation in finance from The University of Texas and has also pursued her Owner-President Management Program from the Harvard Business School.

In her free time, she loves to play tennis, sailing or go hiking. The opposite of a movie buff that she is; Ameera prefers to spend that time reading books related to fiction (mostly thrillers).

Born to a family of doctors in Mumbai, she was brought up in a rather simplified environment. Even though her family was of doctors, they weren’t that rich! In fact, in those days when an air-conditioner used to be the basic of style statement, they couldn’t afford one!

Anyways, when Ameera grew up, she was very keen on going to the United States to pursue her education, but at the same time she didn’t want her parents to hold the burden of the fees. Now even though she was forced to take money from them for her first year, but she made it a point that, that should not be the case in the future. And to comply with that, she took up part-time jobs and achieved scholarships, and paid her fees. By an early age of just 18, Ameera had become financially independent.

After she completed her graduation, she began working for Goldman Sachs in New York and as much as, Goldman was a giant corporation, surprisingly it didn’t appeal to her that much.

She somehow was driven more towards a role which offered her a position of leadership and responsibility. She even tried working with a few start-up companies, in hopes that they would offer her something on similar lines, but to her hard luck, they weren’t able to fancy her either!

Finally, the same dream pulled her back to India in early 2000.

The life story of Metropolis HealthCare! 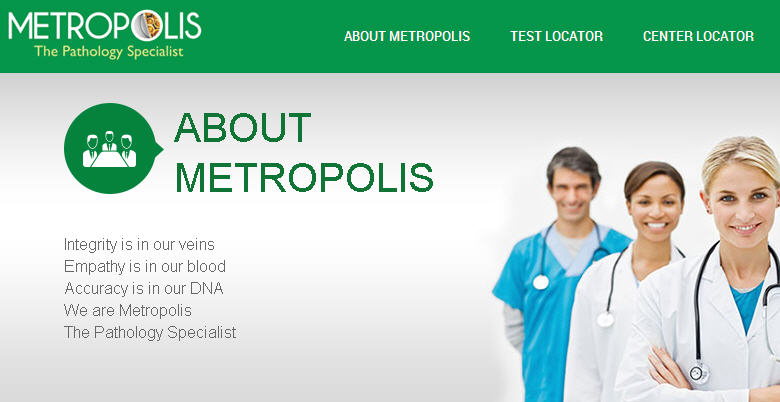 After she came back, she discussed the same with her father (Dr. Sushil Shah)! She wanted to do something which was her thing, which appealed to her and which was result oriented.

Her father used to own a pathology lab, back then! She began watching the way he and things in general worked and to her surprise, she figured out that entrepreneurship was her thing!

She recognised that her Father’s vision of ‘building a chain of diagnostic labs across India’ had huge potential. Ameera quickly decided to capitalize on its business potential and as a first, she changed its name to Metropolis Healthcare.

After that was done, it was time to establish departments like IT, HR, Purchase, Marketing and sales, after which, they began partnering with local laboratories, only to eventually create a chain across the country.

And with that, Metropolis HealthCare was officially formed in 2001!

Now if you look at it, universe was working in mysterious ways for her! The foundation of Metropolis had already been laid in 1981, when her father opened a pathology lab in Mumbai. Back then, I’m sure he had absolutely no idea, what his lab would transform into!

Moving on, slowly Ameera began tapping every possible Lab across the country but while at it, she also faced immense hick ups.

In her initial days, the major problem that the company faced was to convince the local labs to tie up with them. As much as the idea held huge potential, these labs somehow couldn’t see the fact that, tying up with Metropolis would only boost their brand identity and business.

Now apart from that, another grave concern on her mind was that the labour these labs had, were all mostly unskilled and lacked basic knowledge.

Still going ahead, Ameera began training almost everyone from partners to the sample collector and moulded them to become more customer-centric. As much as stupid this sounded, but turned out to be equally critical to Metropolis’s successful expansion from a mere 40-employee organization.

Anyways, Ameera felt that the company was now ready and she wanted to expand further, and to do so the company was in dire need of funds. That is when ‘ICICI Bank Ltd’s venture fund’ came into picture and with that, Metropolis got their first ever (undisclosed) external funding in 2006.

And from here onwards began an aggressive expansion of the company; Domestically and Internationally!

Ameera coming from a finance background, made sure to leave no stone unturned and grabbed every opportunity that presented itself.

Her expansion was so quick and the story of her success had become so popular that in 2010 a New York-based private equity firm called – ‘Warburg Pincus’ proactively approached ICICI and bought their stake in the company. And not only that; but they even injected a whooping $85 Million into the company as well, to make sure there was an unobstructed growth.

And from here onwards there was no stopping them!

In the last five years; Metropolis Healthcare has grown on to become a $350 Million enterprise which has revenues worth more than of $90 million and has a strong staffing of more than 4,500 employees (of which almost 55% are female) and is also India’s only multinational chain of 125 diagnostic centers across India, Sri Lanka, South Africa, Kenya, Mauritius, Nigeria, Ghana, Seychelles, Nepal, Bangladesh, and the UAE.

Today, the company makes their presence felt literally in every state of India, either through their own branch, collection centers or their referral network.

Today, the company boasts of offering a test menu of 4000 tests under a single roof, ranging from routine tests to highly specialized markers in genetics and molecular biology, which covers mostly all therapeutic areas.

To add to that; the company which once used to face difficulties in convincing locals, has now become the most favourable provider of specialized testing for more than 10,000 laboratories, hospitals, research institutions, 50,000 doctors and 200,000 Consultants who process over 15 million tests annually, across 125 cities across the country.

Due to such near-to-perfect quality of services; Metropolis Laboratories have also been accredited by CAP (College of American Pathologists), USFDA, NABL (National Accreditation Board for Laboratories) and ISO 15189 for using best technologies, globally accepted best practices, and highly trained & skilled manpower.

Talking about their recent developments; the promoter family has bought the approx. 26% stake back from Warburg Pincus and at the same time has also invested more than $85 Million to add almost 15 more laboratories and new modernized equipment to their present kitty.

Additionally, they have also entered into dental care services segment as well, and although they have initiated with Mumbai and Chennai only, but they do intend to expand soon.

The company is also looking to acquire companies in North India and East India; more particularly in states like Rajasthan, Punjab, Uttar Pradesh, Chhattisgarh or West Bengal, and may then also go for an Initial Public Offering (IPO) to launch themselves in the stock market.

Now the only problem the company continues to face since the beginning is that; the Indian pharmaceutical industry is very scattered and the lack of regulations and standardization on services, worsen the situation even more.