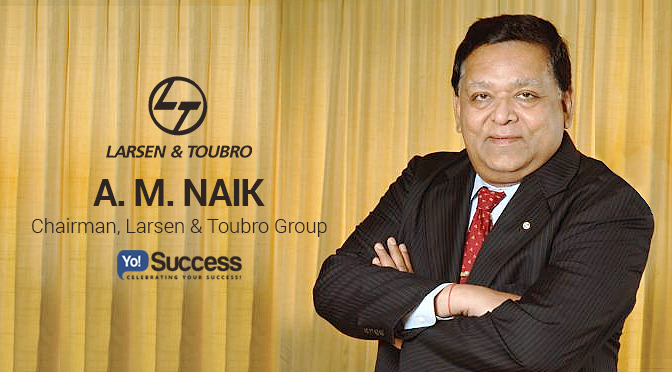 Born on the 9th of June 1942; Anil Manibhai Naik presently is the Group Executive Chairman of Larsen & Toubro Limited.

Naik who joined L&T as a junior Engineer has passed through every rank in the hierarchy to become the Chairman & Managing Director of the Group and within his 35 years-long stint has made L&T one of India’s top five companies in the private sector.

He comes from a family of teachers, which originated from Endhal, small village in South Gujarat and holds a degree of Mechanical Engineering from Birla Vishvakarma Mahavidyalaya Engineering College, Gujarat.

Naik has two children from his wife, Geeta, and both of them live in the United States of America. His daughter is a Paediatrician with two children, whereas his son works at the Google headquarters in California.

Naik is like that typical workaholic who is always at the receiving end of the thrashings by his friends, colleagues, kinds, wife – who is usually the second wife after work and the fact that, he took his first holiday 22 years after joining the company, quite proves their point, too! Now his work does takes him places, on a regular basis, but Naik being a shrewd businessman makes sure that business is never combined with pleasure.

Overall; A. M. Naik – a person, who leads such a diversified organisation with sheer professionalism, entrepreneurship and commitment, is the perfect example of leadership at its best! Under his leadership, L&T overcoming multiple challenges has went on to become $14 Billion conglomerate.

Naik’s career started soon after he completed his graduation!

He decided to move to Mumbai (Bombay back then) along with a note from his father which introduced him to Viren J. Shah (later governor of West Bengal) who was then working in Mukand Iron & Steel Works Limited itself, to apply for its engineering programme.

But unfortunately due to his poor English, the personnel manager had asked him to improve it first. Disheartened; Mr. Naik started working on his English skills and in the meantime, he also joined Nestor Boilers, (a Parsi-owned firm)

Luckily or unluckily; after a while in the firm, the ownership and management style changed, bringing in arrogance and his growth got stuck! And once again, the one-man army was back to job hunting in 1965.

Although he wasn’t much aware but, this happened to be the biggest turning point of his life!

Now while he was at it; he got calls from Philips at 9 AM and L&T at 10 AM (to be precise) and without a doubt he chose the latter because it suited his mechanical engineering degree.

(This is how his interview went)

A dynamic and hard-driving Scotsman named Baker was his interviewer. He initially offered him a job of Assistant Engineer at INR 760/Month.

For the final round, Naik was taken to “the Old Man” and general manager – Hansen, (a man without even a pinch of smile and with a typical “rhythmic Danish accent”).

Somehow this round didn’t go that well and gave an impression of Naik as over-smart.

This resulted into the revision of the offer to Junior Engineer at a salary of INR 670/Month, but with a stipulation that – “the original offer would stand in six months depending on his performance.”

Now from here onwards; his journey would rather look monotonous, keeping the fact in mind that he was a die-hard workaholic, but what makes it really interesting is the fact that achieved many goals and targets in just about, no time!

Within six months from joining, he proved everyone wrong and got promoted a grade higher to a supervisory level. And in the blink of an eye (18 months after joining), he was made the workshop in-charge with 800 people directly working under him. And to top that; he was not even 25!

A prestigious moment arrived when finally he received a contract from the company in 1968. This further motivated him to work even harder. He used to come to work before the shift even started and work till late every night.

The only time he took a leave was when one leg of his had got jammed in a battery-operated vehicle. He didn’t come to work for just three days, and on the fourth day, he was back, on crutches! Just so that it was convenient for him, his office was shifted from the first floor to the ground.

He took his job very seriously and his dedication towards his work could not be explained in words. He had explicitly told his wife that if he’s not back by midnight, he will be back the next morning.

Moving on; his fast paced growth took a drastic halt when Holck Larsen stepped down in 1975 and the whole management was changed to Indians.

The Europeans went away and the senior Indian managers became Directors. And due to the “Indian Mentality” suddenly, seniority became more important that merit. Due to this, Naik spent the longest ever stint in the history of L&T in one position — six years as a deputy general manager!

And when finally, in November 1979, he became a Joint General Manager, he got stuck in that position for the next seven years, after which he got promoted to General Manager in 1986.

From the fastest to the slowest growth ever, a shocking & uncalled standstill it was!

This trend changed when Naik took over as the Vice-President of the organisation and also became a member of the Director Board in 1989. He was a man with a broader vision to expand its wings beyond normal barriers and become a global player.

He firmly believed that L&T is that vehicle which is run by four wheels i.e. — the front two wheels are Training and HR and the rear two wheels are Technology and IT and the spare wheel, is sheer devotion.

Hence, as the new VP; he decided to first restructure the company into several operating divisions and focused on improving shareholder value, whereas HR and IT were equally important parts of his plan too!

Naik as a first; laid down a 90 days action plan for the firm. He believed that the toughest task was to attract the younger generation to the company hence, made sure that merit system was back in action, and that was also the right way to grow.

After initiation; the first two years of transformation turned out to be very painful, not just because it is hard to accept the change but because mainly the economy was in a horrible shape. To avert this and to make sure that their strategic plans were being accepted by all the employees, he started a large-scale interactive process.

He also got a trust formed and took over the Birla stake in that and then a stock option scheme was launched. This created a lot of value for the top management, making them feel secure. And till today, according to Naik – Stock options are the reason they have a stable top management.

He had an ideology that the best growth formula also included creating a solid shareholder value. And frankly, he was very good at that!

He very clearly pointed out to his managers and made sure that it was deeply rooted in their minds that; we cannot have a low market value and still be independent, in an environment where anyone can sign a four to five hundred million dollar cheque to take them and takeover! Make the market value INR 75,000 Cr. and a rare few would be able to sign Billions of dollars. If you want stay independent, you have got to make the company so valuable and so expensive that people stay away from you.

This changed the whole company’s attitude so much that, today, their junior managers look up L&T’s share price on the Internet since they hold 500 of them. And to be honest, this is exactly how shareholder value begins to get created in the minds of people! If your own people trust your product, others automatically and eventually will follow.

These were some of the key reasons due to which the organization was successfully able to increase the turnover fifty times over in around eight years.

Now in the early Nineties; following the path of growth, Naik came up with the idea of manufacturing engineering equipments. And having said that; he without wasting more time began manufacturing plastic machinery, tire machinery and custom engineering products!

This enabled L&T to achieve major success, expand its genre and sparkle in the field of technology and nuclear sectors.

While he made sure the organization grew smoothly, he also involved himself in many social activities such as development of an educational institution set up by his father in Navsari, Gujarat along with several educational and charitable institutions which could help support the rural population of India. Much of this have been funded by personal trusts, he had set up by selling some of his L&T stock options worth INR 12 Cr, over the years.

Interestingly, L&T had no chairman from 1991 till 2003, after which Naik was appointed as the Chairman of Larsen & Toubro Ltd. and then Executive Chairman in 2012! And since then have just grown, grown & grown!

Since then, Naik has made L&T so unique and diversified that nobody has fully been able to understand its doings. Some think it’s a construction company, just when they learn about cements, and when they digest that fact, a new piece of information hits their ears that they also build nuclear reactors.

After their restructure; L&T got divided into nine virtual companies who operate in different segments, the nine sectors for which companies are formed are:

L&T Group now has 153 lines of business which are clubbed into 63 SBUs (Strategic Business Unit); wherein Engineering and Construction covers 85% of their business. Apart from India, they now have manufacturing facilities many countries globally which includes the Middle East, South East Asia and China and have customers in more than 30 countries worldwide.

Today Financial Institutions hold around 30.5% equity shares in L&T and Life Insurance Corporation of India is the largest shareholder in the company with 16.45% shareholding. The foundation’s constitution does not allow it to sell the shares. Hence, as long as the company has the support of Indian financial institutions, it will always be controlled by the management. Basically, Anil bhai has created L&T’s own version of the ‘poison pill’ to safeguard the company from ruthless takeovers.