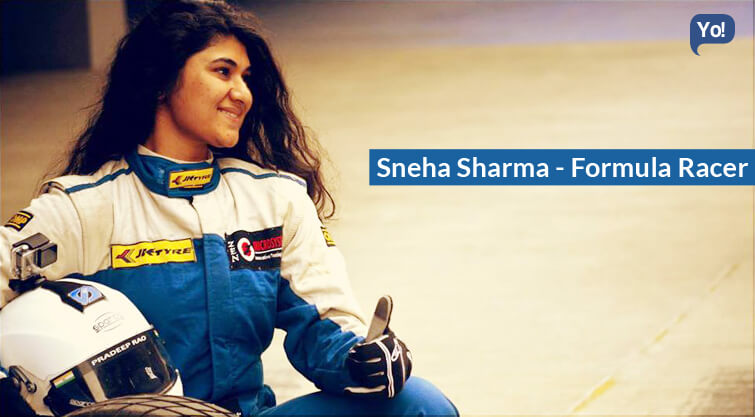 Sneha Sharma is a passionate formula racer, who put her motorsport on hold to pursue a career as flying pilot. A full-time pilot with an Indigo airline, Sneha resumed her racing career in 2014. Sneha earned the tag of ‘India’s fastest lady’ in ‘Mercedes Young Star Driver’ program. She had secured six race victories and nine runner-up positions in Karting. She even scored a 4-stroke category in her very first Formula Car Race at JK Tyre National Karting Championship 2009. In her very short racing career, Sneha became the only youngster to qualify into the final round of the KCT of the MAI National Karting Championship.

Sneha got her first break in one of the national teams while pursuing her flying course. She participated in the local racing event in Mumbai and clocked the fastest lap of the day. Since then, she never looked back. She had been spotted at various motor racing events at ease with men all around and giving them a tough time. It was in 2009, she did secure a podium finish in her first Rotax rookie race. Recently, she has secured a lap time of 40 seconds at 11th JK Tyre-FMSC National Karting Championship 2014.

Please provide a brief overview about yourself?

What is your life mantra?

Follow your passion. If you want something, go get it, and get it now.

Racing is a very challenging sport both physically and mentally. I have had to spend months on fitness in order to sustain the high g-forces imposed on the body during high speeds, managing my passion for racing and profession for flying requires acute time management. Racing is a very expensive sport, and it is not easy to attain sponsors. I have worked with my racing team as a manager/tuner/trainer in order to subsidise my racing costs while at the same time racing in the team. Currently, JK tyres and Indigo Airlines are my sponsors.

My constant determination, faith in my own self-helped me overcome these challenges. Quite often, I do not get time to practice as compared to my fellow competitors, but I push harder on race weekends to perform better. It is important to believe in yourself when no one else does, that is the key to success.

Most often I am the only girl on the grid competing against all guys. There have been times when I have faced challenges in being accepted by fellow racers and others in racing. Many times comments have been passed regarding my driving capabilities since I am a girl. However, my performance and multiple victories have spoken for itself, hence, I believe in making my own place in racing and once the helmet is on, I am nothing else but a racing driver.

According to you, what are the three qualities an individual must have to achieve success?

I use google a lot to read about racing. Few people are aware of how technical racing really is. It requires acute knowledge of racing lines, braking techniques, overtaking techniques etc. that one needs to educate themselves about before getting into a racecars. I watch a lot of racing videos on youtube as well. In addition, of course, I love connecting with my fans on my social media

Share any one habit which you think makes you more productive.

Making checklists/to do lists. With racing, flying, fitness and other corporate social responsibilities that I indulge in, Making lists and ensuring I get them done keeps me really productive and ahead of my game. One thing flying teaches you. ALWAYS STAY AHEAD OF THE AIRCRAFT. I apply that to my life as well.

Share any one habit which you wish to change in yourself.

I over exert myself. I wish to take more vacations, preferably by the beach. However, with racing and flying, I do not get to do that much.

Answer in less than 50 words

Instead of asking yourself what I should do, ask ourselves where I want to be? and start working towards it.

Try to seek balance in life, and success will be yours. Because the true definition of success is to be well balanced and to excel in every field of life while making your dream happen.

DISCIPLINE. Discipline takes you far. The difference between those who succeed and those who don’t are the ones who push themselves even when they don’t “feel” like.

I as an individual have lost 30 kgs of weight, and it took discipline and a clear image of where I wanted to be. Finish what you have started. Don’t quit if things get difficult.

“Only those who will risk going too far, can find out how far one can possibly go”

I intend to be NATIONAL CHAMPION in the Formula 4 series and graduate to the Formula BMW series. After which I plan to take up the offers which I have been offered to race abroad and carry our flag internationally. I am also currently working towards becoming captain.

If you get a chance to start your career again what would you do differently this time?

I have very few regrets, as I am quite satisfied with my progress, however If I were given another chance, I would ignore the people who discouraged me to reach my goal.

What are your top three getaway destinations?