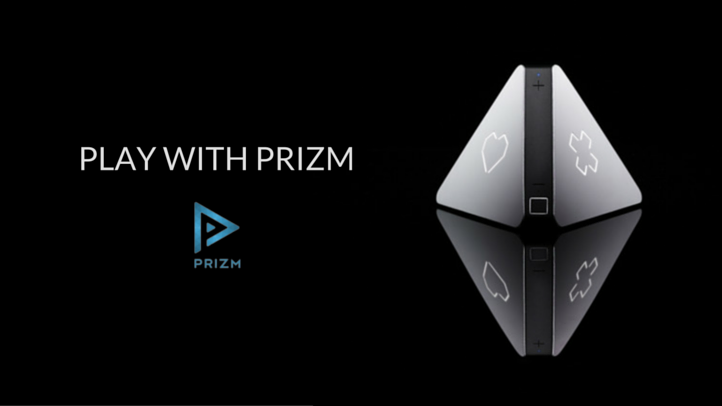 How often does your music player or cell phone play the songs you like depending on your mood or environment? Huh, is that even possible?

Well, till now it wasn’t but with the introduction of Kickstarter backed Prizm this will soon become reality.

Let’s first give you an idea of what Prizm is?

It is a prodigy of Ubithings – a French startup company which was founded in September 2013 by Arthur Eberhardt, Olivier Roberdet, Pierre Gochgarian, and Pierre Verdu.

After 18 months of rigorous coding & designing of the prototype, Prizm has been made to bring the product to life.

Prizm is a 3.8 inches tall pyramid which runs a Linux Operating System on an ARM Cortex A8 at 1 GHz with 256MB RAM.

You only require one account to stream music via the device but you can always create multiple accounts for different users.

The beauty of this device is that it is part offline and part online. So for instance, if you visit your friend who also owns the device then Prizm will automatically identify you and your music profile and accordingly play the music that is liked by both you and your friend.

It also comes with a companion app which helps you to remotely control the device. At the moment, this app is compatible with only iOS 7 and Android 4.0.3 (Ice Cream Sandwich) and higher versions but will soon be available for other systems too.

With the help of acoustic sensors, it automatically learns when you want to listen to which mode. To do that, it takes multiple things into account like the time of day, day of the week, noise level in the room, etc! So for instance, after coming back from gym you set library mode, then the next time when you come back from the gym it will automatically play the library mode.

There are two buttons on the device which help you choose if you like the song or not. And eventually the device understands your likes and dislikes and automatically decides by itself.

During the setup of the device you have to match your device/s to the Prizm profile and then later whenever you’re around with the device, it senses you. Prizm uses the MAC address to capture your Wi-Fi and Bluetooth signals of all the wearable devices or your phones to trace you. With the help of that it also, knows what’s happening in the room, who’s in the room, what is the current environment (party, soothing, etc!) and accordingly plays the music. And if it detects multiple accounts then it mixes up the playlist and randomly plays songs.

Along with these, Prizm also offers some really interesting features like you can set it to wake you up in the morning and it will play a new song everyday as an alarm tone. Also, it automatically goes-off to sleep after you do, at night!

Prizm is in its last week of the campaign worth USD 129, and has already raised USD 138,600 which is way over their target of USD 70,000. Soon the company will begin with testing the designs and hopes to start full-scale production by April 2015 which will be shipped by June 2015. The French telecom giant ‘Orange’ is helping them with the manufacturing of the product.

The team aims to bring in new features in future like making it compatible with more streaming services and these new updates shall be automatically pushed into the devices.

Although, how it works is still a mystery but then it definitely is a proven fact that their design reflects that Prizm is a form of artificial brain, adapting to the environment and acting accordingly. Hoping this idea turns successful, this is going to be the biggest revolution to the way of listening to music.