Mount Your Phone Anywhere With MAG-NIT! 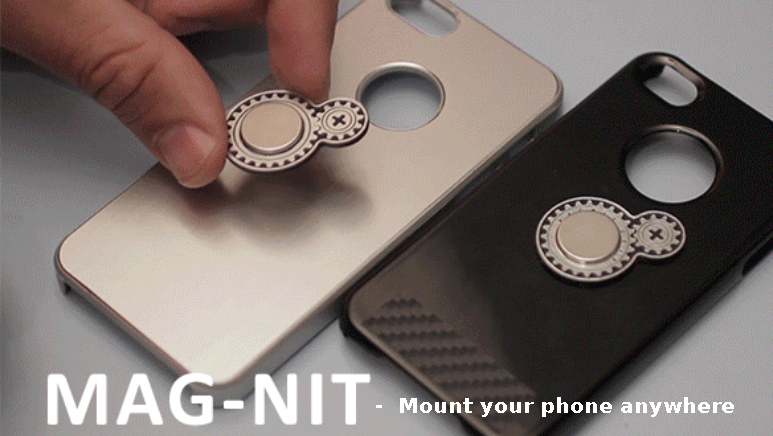 So we hear that we have reached to point where we are now literally surrounded by technology. Evidently, that is true! From your computer to your cell phone to any machine that makes your life easier, they directly or indirectly contribute to the development of technology.

Having said that – at one end we have people who say that we are reaching a saturation point, while on the other end, people like Boris Ignatov come from nowhere and prove the former wrong.

Allow us to introduce his latest prodigy – Mag-Nit!!

Mag-Nit is an all-in-one iPhone magnetic mounting system that also can be used as a stylus, kickstand, wall dock, mount, car, tripod mount, time-lapse stand, taking selfies and pretty much anything that your imagination can take it to.

To tell you a little bit about the device, it is compact, comfortable, versatile, and feels great to hold. Additionally, it is also imbibed with a ferromagnetic steel core and standard ¼ inch camera treads, along with some soft coating and a replaceable nib as well.

And for all those worried about the design and the strength of the device – have no fear, because Mag-Nit uses a thin and very strong nickel-pleated magnet in the middle, and is also laser cut and engraved in their workshop.

Be rest assured that, after 11 months of designing, building and testing a range of prototypes, the makers are 100% sure that there is nothing on your phone that is built on the lines of magnetic technology or for that interferes with magnetic field.

Moving on, the Dock of Mag-Nit sticks to the non-metallic surfaces and provides a strong mounting to your phone, but the real beauty of the device is that, it is both minimal in look-and-feel and high in functionality, and is also compatible with any model of phones or tablets as well.

You can swiftly change the position of your decide to virtually any viewing angle without any hassle or fear of damage.

The Standard set usually contains one of each Mag-Nit Mount and Mag-Nit Stylus, along with four Mag-Nit Docks (provided for using at home, office, car and gym).

At this point, the device is available in two metallic finishes of Gold and Silver, but more options may be made available in the future.

And believe me when I say this – such a stylus has yet not been released in the market yet!

Lastly, the device has very recently been launched on Kickstarter, and has already received 12 backers who have pledged in $553. Their goal is $10,000. The kickstarter campaign shall be available till 28th of December 2015.

Other than that, the makers have also launched a Special Set called “Kickstarter Patron” for $65 which won’t be offered in retail. Its uniqueness is that, one would be able to get their name or any other text of their choice, custom engraved (max 50 char.). The estimated delivery of either of the packages would be Feb 2016.

Based in New York, ‘Boris Ignatov’ is the brain behind this gorgeous piece of technology.

Born and raised in Bulgaria, Boris holds a Masters degree in architecture from Columbia University and Sofia University of Architecture, and has also worked for some of the top notch architectural firms which include “Perkins + Will Architects”. Additionally, he is also a licensed architect in the state of New York and Bulgaria as well.

He also runs a mobile architectural called ‘Ignatov Architects’, and is known for state-of-the-art and equally unique smart furniture, making gadget design, and sustainable architecture. Some of his best works include the Equinox House (2012) and the Conservatory House (2010).

The man also accounts for a list of awards, some of which include: -