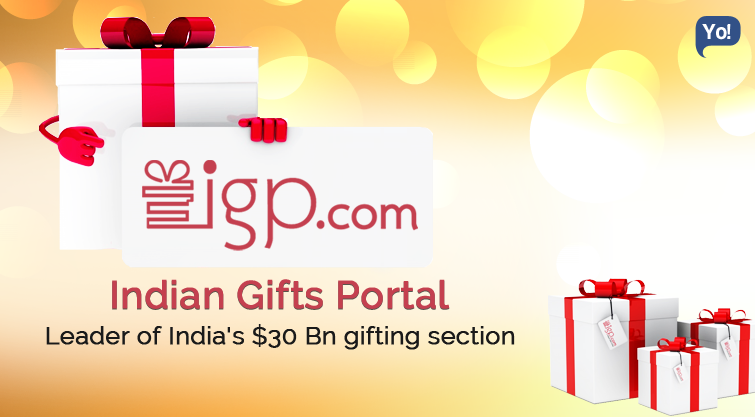 What is Indian Gifts Portal?

Founded in 1999 and headquartered in Lucknow – Intermesh Shopping Network Private Limited’s Indian gifts portal (IGP) is a reputed online shopping store that offers a vast array unique and special gifting items as per their budget, choice and other requirements and delivers gifts across the world.

It is one of the only online shops in India that can easily resolve the problem of gift selection of an individual.

They focus on three broad gifting categories — festivals, personal occasions and corporate gifts. And using this platform, one can find a broad collection of exclusive gifting items under one roof.

This famous internet-based superstore is known for delivering an assortment of gifting solutions that range from flowery arrangements to mouth watering chocolates, toys to games, arts and collectibles, jewellery, apparels, wine gifts hamper along with many other presents. One can deliver these gifts to any region of world without any delay.

Some of their categories include:  birthday, anniversary, flowers, cakes, gifts for him, gifts for her, personalized gifts, country & city special, and karwachauth gifts, with specialties such as: Birthday Gifts, Anniversary Gifts, Wedding Gifts, Rakhi Gifts, Send Gifts To India, etc..

With four offices in India – Mumbai, Noida, Jaipur, and Lucknow, and one in Los Angeles (California); IGP offers its users gifting options from more than 190 categories that also includes edible, perishables, apparel, and home appliances among the others.

What separates them from the crowd is that the gifts that you see on the platform are sourced from exclusive regional manufacturers of handicrafts and other products from the remote villages of India through strategic linkages. Additionally, all the items that you see on the portal come with quality assurance. They have five warehouses, including one in the US.

Talking about the security, their shopping-cart software runs in Secure Mode on the customer’s browser, using SSL (Secure Sockets Layer) to encrypt sensitive data such as credit card numbers.

TRIVIA: Deepika Padukone and Salman Khan are the top celebrities that fans gift to through our site!

To begin with – IGP currently follows an inventory-based model, and also charges its merchants a commission for flowers and cakes.

To be able to use the website, all you need to do is register on the portal and you’re good to go. After you are done with the registration phase, you get your own personalised ‘My Account’ page on the store.

Using this section, you can perform multiple tasks such as: Tracking status of your orders online, Reviewing your past orders, Creating a personalised address book online, and Ensuring maximum possible degree of customisation in delivery of gifts to your loved ones.

As you continue browsing and shopping on the store, this section gets more personalized and eventually helps you with more information to make your shopping experience more effective.

The company was founded by Manan Sharma in 2001 under the wing of IndiaMART. Manan has completed his Masters of Business Administration in Marketing and Finance from the Amity Business School.

He had started as the founding team member of Indiamart.com in 1996 and used to head the strategic sales & marketing department as the AVP. Eventually, with the support of the founders of IndiaMART, he started IGP.com four years later in 2001. Rahul Garg, today acts as the CEO of IGP.

Rahul is the CEO of IGP!

An ardent reader, who also happens to love epic fantasies, and watch TV series based on science fiction or sitcoms, Rahul still remains to be a family man living in Mumbai.

A Bachelors of Technology in Chemical Engineering from the IIT (Bombay), and CFA Charter holder in Finance from the CFA Institute (USA) ––– Rahul had started his career with Bank of America Securities (the investment banking subsidiary of Bank of America until it was merged with Merrill Lynch) as Investment Banking Analyst in May 2005.

Between August 2010 and December 2014 – he not only worked with HSBC Securities as their Vice President for three years, but also Cofounded and ran ArtisanGilt.com (destination for global customers looking to shop for novel, authentic & affordable Indian handmade & designer lifestyle products at best prices) for about two years.

Then eventually, he joined IGP.com in January 2015, and since then has been handling their top-most position.

Indian Gifts Portal (IGP) had begun in partnership with the IndiaMART in 2001.

It had initially started off with selling Haldiram’s mithai (sweets) on Diwali, which made them realise that Indians across the world wanted to connect with their loved ones through gifting, which is when they realised that most of the Indians didn’t really know what to gift family or friends on occasions, and ended up giving gift or cash cards. This is what led them to create a platform for Indians as well as for the lovers of Indian ethnic products.

Over the period of time, the company has grown on to become the leader of the space. By 2013, after thirteen years since inception, they were now providing over 75,000 gifting entities under 1500 different categories, and catered to approximately 20,00,000 visits, 130,00,000 views, and more than 400,000 likes on their Facebook page.

By 2015 – the company had grown at a CAGR (compound annual growth rate) of more than 70% in last three years, and was well positioned to deliver a multi-fold growth in next 3 years as well. This growth had an increasing focus on Technology which was being used to enhance consumer experience & further optimize its delivery capabilities.

By now, they were already powering many sites like HDFC bank, ICICI bank etc. for their gifting options. They now had accounted for four offices in India – Mumbai, Noida, Jaipur & Lucknow – and one office in Los Angeles, California.

Interestingly, IGP had achieved this success and had been able to maintain the largest player position in $30 bil market without taking a single penny from external investors.

They were now the only multi-category gifting player in India that had more than 80,000 SKUs, which offered same day delivery facility in 300 Indian cities and 3 days International delivery in nearly 100 countries, and had conversion rates as high as 15% during Festivals and repeat purchases of 60%+. More than 50% of their orders now came from international customers, largely NRIs and other immigrants.

More recently around August 2016, the company announced that they were getting one million daily views and 10,000 daily orders, and were doing sales at a run rate of ₹40- 45 crores.

Lastly, talking about their investments – IGP has recently secured their first ever round of external funding worth $2 Mn (₹13 Crores) in October 2016. This angel round includes funding from the family office of Naveen Arya (one of the three promoters of Karamchand Appliances), who had invested in his personal capacity, and Tarun Joshi (India director of UK-based private equity firm 3i).

They will be using this funding to develop machine learning technology for its gift-discovery portal, and would also use it to scale up their senior management as well.

How is the Indian Gifting Industry Doing?

There was a time when only birthdays, anniversaries and festivals were the noted occasions for exchanging gifts and surprises. But evidently those times are now gone, and gifting styles have changed. There are so many more reasons people now gift each other.

In fact, gifting market in India has now grown on to become a $30 billion market, of which only around $400 mil worth business is online. Furthermore, gifting has also broadly got divided into three gifting categories — Festival Gifting ($7.5billion), Personal Gifting ($20billion) and Corporate Gifting ($2.5billion)!

To fulfil these demands of the masses, online gift portals have become a kind of one-stop-shop, giving the pampering and lucrative easiness that they provide.

Even though urbanites have started using online gifting as their first option, half of their community still rely on same old tradition, indicating that online gifting still remains to be more B2B than B2C.

This only means that Indians will indeed, take time to get used to the concept of online gifting. That said – the next logical step for the Indian gifting market would be to transition from cash gifts or gift cards (that hold low emotional value) to more emotionally valuable and desired gifts.

Nevertheless, what we can expect is a rapid boom in this sector, in the near future!!!