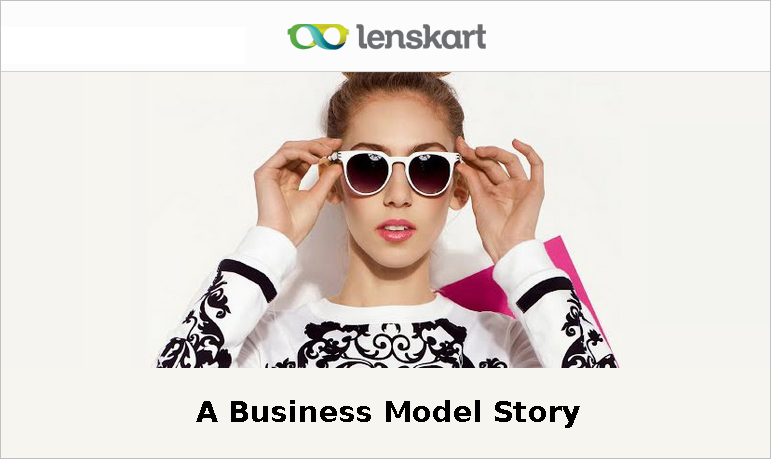 According to the latest Government reports, the total Indian eyewear segment is growing at 30-40% per year!

Having said that, more than one-third of our population has a vision correction problem, but only 25% of these use any kind of eyewear.

To solve this purpose, Valyoo Technologies has built “Lenskart”!

What Is Lenskart.Com And What Is Their Business Model?

Lenskart is one of the only online shopping portals for eyewear and also stands tall at the number 1 position.

With a unique physical presence, Lenskart today offers more than 10,000 different styles of eyewear to fit all pocket sizes. It is the only company in India which makes use of ‘robotic technique’ to make the product that delivers micro-precision glasses with 0.00 degree power error.

Lenskart uses 100 latest machines imported from a US-based company Welch Allyn, which has the potential to check the eyesight of a three-month old baby as well.

One can choose to order from a range of eyewear options such as Spectacles, Contact lenses, or sunglasses, for both men and women. They hold products from some of the best makers in the world, including – Rayban, Bausch & Lomb, Tag Heuer, Johnson & Johnson, Sprint, Fastrack, Oakley, Vintage, Ciba Vision, and Cooper Vision etc.

The glasses are custom-made with single vision, bifocal, or progressive prescriptions across all powers, and since, a lot of ‘other’ cost get bypassed, their glasses come 50% cheaper than market average as well.

With a 1 year warranty on all their glasses, Lenskart offers glasses in 3 sizes – small, medium, and large, along with a range of schemes/deals like –

The multi-brand eyewear seller has also expanded its reach via the offline medium and today, has over 100 stores across more than 66 cities in the country with delivery in over 100 cities, including tier 2 and tier 3 cities like Agartala, Tirupathi, Siliguri, Raipur, Haridwar and Varanasi as well.

One of the many uniqueness of Lenskart is that, it does not target any market segment or age group in specific, but has designed their product for all the masses in general.

Once ordered, the product to reach the dispatch stage takes anywhere between 5-12 days since the order confirmation date, post which, it takes 2-5 days to get delivered to you.

And if for any reason, the products need to be returned, in such a case, the company has a 14 days return policy. No questions asked. Lenskart has the lowest return rates in the industry of 4% return rate of overall shipments.

The company delivers to 450 cities across India along with majorly all the countries across the world. They have partnered with a range of third party logistics partners like Javas, Blue Dart, Delhivery, among others, to deliver in various cities across India.

Peyush Bansal is the founder of Lenskart. Other Co-Founders include: – Amit Chaudhary and Sumeet Kapahi. Together, they lead a team of more than 900 employees based in their Headquarters in Delhi.

Peyush has completed his Bachelor in Engineering from McGill University in Canada, post which, he had also worked with ‘Microsoft’ in America as a Program Manager.

After working with them for a year, he moved back to India to pursue his Post-Graduate diploma in Management for Executives from IIM, Bangalore.

After completing his education for good, he then setup his first company called ‘Valyoo Technologies’ in 2008. Under Valyoo, he launched their first business portal – ‘SearchMyCampus.com’. A portal or rather a classified site, through which students could search for jobs, accommodation, books, coaching classes, bikes, laptops, and a lot more.

Although searchmycampus.com was a success, Peyush decided to venture into the e-commerce world and launched ‘Flyrr.com’. A shopping portal for selling eyewear
exclusively, but this was based in the US.

After both of these became a hit, in 2010 he expanded to the Indian market with more-or-less the same idea, but called it Lenskart.com! Unlike Flyrr.com, Lenskart has a larger range of offerings.

What Are The Business Strategies Used By Lenskart?

The success of Lenskart’s as a Business model has largely been because of the following: -

As per their statics, most of the e-commerce companies see around 60% sales from non- metro cities’, keeping that in mind, their focus too remains the same.

Now Lenskart relies heavily on a discounting strategy to lure its customer, and to maintain this you need a strong upsell program as well, for example, when someone buys a phone, they are also displayed with relevant phone accessories.

On a broader scale, Lenskart is trying to evolve itself as a fashion-driven model where customers come to try out new frames, get check-ups done at home and bring awareness about eye care.

Having said that, they follow an inventory based model, wherein they have partnered with a majority of private labelled vendors to provide you with the products. They have teams at Lenskart who selects the goods, their design, stocks them, then put them on the portal and lastly passes them to the customers at the best value.

According to the company, this inventory-led model is their differentiating factor as compared to the other ecommerce portals. Given the fact that, third-party vendors sell to consumers on other marketplaces, they cannot take the responsibility of the quality of the product.

To add to that, no ‘drop-ship’ model is followed and all the shipments are also delivered from their own warehouse, as well.

Other than that, Lenskart also uses a brilliant ‘order rescue strategy’ wherein – say for example, you are performing a transaction and for any reason you are facing any type of error, your order gets declined, or for that matter you’re not able to get through the transaction; in any case, you will automatically receive a call in the next 10-15 minutes, from senior employee of Lenskart to provide you with a resolution for the issue.

Moving on! Now, they often have come across a question – “why would / should anyone buy eyewear online?”

To counter this and all such questions, Lenskart has been going all out and looking at all the reasons why a consumer will not buy from them.

One of the obvious reasons is that they want to get their eyes checked or trial before purchase. To tackle these issues, Lenskart had launched three services – ‘Try At Home’, ‘Virtual try-on’ and ‘Home Eye-check up’.

Other than that, to enable customer have feel of product before buying, they have come out with an even more flexible solution. The company has also introduced physical / offline stores using the franchise model.

These stores are nowhere close to the conventional ones, and are imbibed with state-of-the-art look-and-feel, a trained optometrist to provide you with a free eye check-up, and an access to the full collection of products.

Over the period of time, the multi-brand eyewear seller has also expanded this offline medium to over 100 stores that are spread across more than 66 Indian cities, which include major cities like – Delhi, Chandigarh, Pune, Mumbai, Bangalore, etc., along with tier 2 and tier 3 cities such as – Agartala, Tirupathi, Siliguri, Raipur, Haridwar, Varanasi, and many more…

What Are The Marketing Strategies Used By Lenskart?

Since the idea is new and unique, Peyush has put great efforts to make sure Lenskart is able to change the minds of the masses and that the idea is a success. But overall, he deeply believes in the power of word of mouth, managing customer retention and encouraging them to come back again and again.

Nevertheless, the company has opted for all the mediums to market their product to their relevant target audience.

Beginning with the Digital medium…

Since their beginning, Lenskart has been hosting and still hosts a range of online campaigns with luring offers to keep their customer engaged to their brand.

During their initial days, when Lenskart wasn’t that successful, their main idea, their theme behind a digital campaign was to create a branding of Lenskart. Hence, ‘viralcurry.com’ was hired to do the job.

Over the period of time they managed to gain a reputation, post which, they used their Facebook and Twitter platform to create a campaign hosting a Game, with the Lenskart revamp hashtag.

This led to 1.6 Mn hits on their Facebook page, and 6000+ tweets on Twitter. Due to this strategy, their sales also increased drastically.

Around the same time, they had also launched an ‘Email marketing campaign’, to increase engagement with its customers and to gain their trust and confidence.

They had hired ‘netCORE’ for the job. netCORE’s email marketing experts conceptualized an email marketing campaign – that demonstrated the steps which Lenskart follows, from the time an order is placed, till the time the product is delivered at customer’s doorstep. And the customers were also asked to reply back with their opinion, thoughts or ideas to maximize customer satisfaction.

This transparency helped greatly to gain the confidence of customers. And the replies ensured active involvement, participation, and higher engagement for the email campaign as well.

As a matter of fact, the email campaign was so good that it got Lenskart included in “Create and design E-commerce” category of Marketing Sherpa Email Awards 2014 as “Honourable Mention” as well.

Moving on to the Television Commercials…

Over the period of time, Lenskart has also rolled out a few television advertisements to promote their brand to a wider audience.

Their first ad that came out was based on a simple concept that – proper lenses on your eyes can impress others. This was presented beautifully by focusing on a boy and a girl in a library, where the boy asks the girl out for a cup of coffee, and the girl replies differently based on the type of glasses that the boy is wearing.

Lenskart has successfully shown the audience that even with a low budget, if the right advertisement with the right message can sell the brand well.

Lenskart in simplest terms is just like an optical store, only online. Unlike other eCommerce portals, they have opted for an inventory model and make money on the sale of every product that is sold.

Lenskart.com was founded with a small investment of ₹30 Lakhs. Their lowest range of high quality eyewear can be bought at ₹250.

Starting with selling 10-20 spectacles a day, today the company has grown to make a sale of more than 1,000 spectacles daily. Around 10% of the sales come from mobile.

Lastly, talking about their funds; overall, the company has completed three rounds of funding which include – $22 million in January 2015, $10 million in February 2013 and $4 million in October 2011, from investors including – IDG Ventures, Ronnie Screwvala-led Unilazer Ventures and TPG Growth & TR Capital.