Zano – The Selfie Drone, Don’t Fly It! Task It! 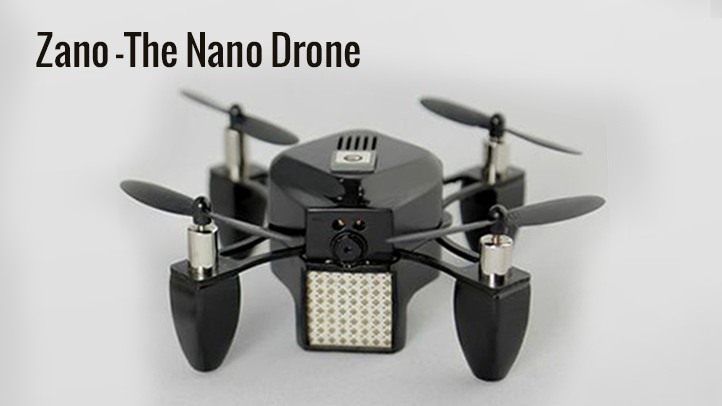 We live in a world filled with an obsession of being clicked!!

Although, men love clicking pictures too but women have brutally used and overused the luxury of taking pictures. They have morning selfies, bathroom selfies, breakup selfies, party selfies, group selfies, duck-face selfies and god knows what else! And to capitalize on that we have cellphones and kick-ass digital cameras.

But how often have you heard someone clicking your pictures from air?

In simple terms, Zano is the world’s most urbane micro-drone which is specially designed to click aerial images & HD videos.

Zano is the prodigy of Ivan Reedman of the UK-based firm Torquing Group Limited. They began working on the Nano UAV (Unmanned Aerial Vehicle) in the 2010 with an initial target audience of defense, industrial and law enforcement markets but eventually grew to a larger audience of consumer market in 2013.

It is an ultra-portable device which is small enough to fit in your palm and smart enough to fly all by itself!

You can control the drone directly from your Smartphone (iOS, Android) with the help of an onboard Wi-Fi. The drone is covered with infrared sensors which help the drone to protect itself from the potential obstacles like trees, birds, wall, etc. and also helps it understand the exact distance it holds from the smart device.

If the battery is low or if the drone crosses the maximum range of distance, it will automatically return to the smart device. The battery of Zano is removable and the same can be replaced by a charged one whilst the other one is on charging. Also, the same can be charged without removing it as well by just connecting the standard Micro-USB connection with a simple adapter to the drone.

Zano is 2.5 x 2.5 inches in size, 55 grams in weight, uses a 32bit 330DMIPS processor, 802.11b/g/n 2.4GHz for WIFI connectivity and has a max speed of 25 miles/hour. Apart from that, it comes with an On-board MicroSD card, 1 x Spare battery, Bidirectional motor control which helps in driving in any direction with ease and has a 10 – 15 min continuous flight time with a 15 – 30 meter best possible operating range.

Along with that, the camera that Zano uses is of 5 megapixels and has a High-sensitivity onboard digital microphone for crisp voice clarity.

As the drone is directly connected to your Smartphone, you can click a picture or record a video and instantly share it online. To add to that, due to ‘Digital Image Stabilization’ feature the pictures or videos are clear and precise.

Now, using Zano is as simple and similar as using a remote control toy helicopter. Zano being connected with your Smartphone follows its commands; so if you wish to turn left then just tilt your phone left and if you wish to turn right all you need to do is tilt right and so on.

Also, the app comes with a “Free Flight” mode which will give you an onscreen joystick to operate the drone wherein the altitude of the same can be changed with the help of slide bars present on the screen.

On the virtual tether; if you turn on the “Follow Me” feature you can hold Zano’s position and from there onwards the drone will maintain that distance from the Smartphone and move with you whilst avoiding any obstacles.

Zano is incubated with a Failsafe software, due to which no matter what happens the drone will always come back to the smart device.

Additionally, as mentioned on their Kickstarter campaign the company also plans to launch some more features in the future: -

The company has just begun the work of GUI and the App integration and intends to launch the same for Android and iOS by May 2015. At the same time, the BETA testing should begin in March 2015 and the production for the drone shall begin by May 2015.

The product is amazing, far beyond anyone’s imagination, has looks to-die-for, has the perfect USP and has every other reason to be the most desired invention. But the only question which pesters our mind is that, to what extent it will be able to sustain the obstacles that may arise and how far are its features doable.

Anyway, time is the best judge!