GST Bill decoded – A must read for the common man! 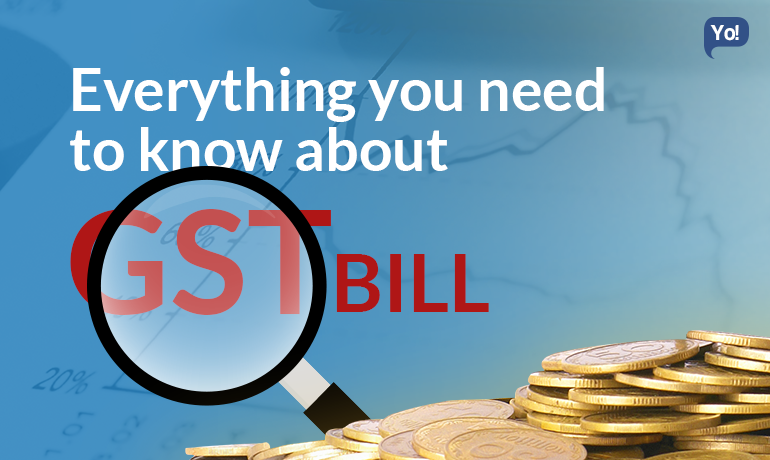 What is GST (Goods and Services Tax)?

The biggest indirect tax reform since 1947 – the Goods and Services Tax Bill or the more famously known GST Bill, is a single tax on the supply of goods and services, right from the manufacturer to the consumer.

This tax would be charged and collected at every stage of sale or purchase of goods or services, based on the input tax credit method, which makes GST essentially a tax only on value addition at each stage. And the final consumer will only bear the GST charged by the last dealer in the chain, along with all the set­off benefits at all the previous stages.

It also allows GST-registered businesses to claim tax credit to the value of GST they paid as well.

In other words, GST is one [uniform] indirect tax that combines all other indirect Central level and State level taxes into one, making India one unified common market.

It is a comprehensive indirect tax method on manufacture, sale and consumption of goods and services throughout India, to replace the taxes that are levied by the central and state governments. The nature of GST itself is that it taxes only the final customer.

It is officially known as The Constitution (One Hundred and Twenty-Second Amendment) Bill, 2014, that proposes a national Value added Tax. It was published on 19.12.2014, introduced by Arun Jaitley, passed by Lok Sabha (8th August 2016) and Rajya Sabha (3rd August 2016) and will be implemented in India from the 1st of April 2017.

This bill will come directly under the Central government, will be governed by the GST act and with the help of certain procedures they would also be providing feasible conditions for the taxpayer.

The central government has also assured states of compensation for any revenue losses incurred by them from the date of introduction of GST for a period of five years.

The Structure and Features…

Keeping in mind the federal structure of India, there are going to be two components of GST – Central GST (CGST) and State GST (SGST). And in cases of Inter­state transactions, the Centre would levy and collect the Integrated Goods and Services Tax (IGST), which would roughly be equal to CGST plus SGST. Either ways, no cross utilization of credit would be permitted.

At the Central level: Central Excise Duty, Additional Excise Duty, Service Tax, Additional Customs Duty commonly known as Countervailing Duty, and Special Additional Duty of Customs, will be subsumed. While, at the State level: Subsuming of State Value Added Tax/Sales Tax, Entertainment Tax (other than the tax levied by the local bodies), Central Sales Tax (levied by the Centre and collected by the States), Octroi and Entry tax, Purchase Tax, Luxury tax, and Taxes on lottery, betting and gambling, shall be subsumed.

The GST Council will consist of the Union Finance Minister (as the Chairman) and MoS in charge of Revenue; Minister in charge of Finance or Taxation, or any other Minister, nominated by each state.

Besides these; the other salient features of the Bill include:

A manufacturer of shirts. He buys raw material or inputs worth Rs 100. This amount includes a tax of Rs 10.

He manufactures a shirt using those raw materials, and during the process he adds value, of say, Rs 30 to the materials he started out with, making the gross value of his good to be (Rs 100 + Rs 30) Rs 130.

But with the new GST, he can set off this (Rs 13) tax against the tax he has already paid on raw material/inputs (Rs 10), and pay the remaining Rs 3 as the effective GST.

But again with the new GST, he can set off this (Rs 15) tax, against the tax that he already paid (of Rs 13) when he purchased the good from the manufacturer, and only pay the remaining Rs 2 (Rs 15-13) as the effective GST.

But again with the new GST, he can set off this tax, against the (Rs 15) tax that he already paid during his purchase, and only pay the remaining Rs 1 (16-15) as the effective GST.

But if you look at it from the other end –– in a full non-GST system, there is a cascading burden of “tax on tax”, as there are no set-offs for taxes paid in the chain.

GST is a worldwide accepted system that is now being seen to be as a more efficient tax system which is neutral in its application and distributionally attractive.

Some of the benefits of the bill include: -

The benefits of GST are:

Other than these, although GST is deemed to benefit all businesses in India, but small businesses can rejoice for the following reasons:

This goods and services tax will undoubtedly give India a much needed facelift on the taxation front.

Of course, the suspense over the rate at which GST will be levied remains, but that shouldn’t be much of a trouble, as analysts and economists are predicting it to be somewhere around 17%-18%.

Goes without saying – since the bill has just been passed in the current session, it will take a good few years, to completely roll out GST and see its effects.

Therefore, it will be premature to conclude how this reform will impact the Indian economy overall, in the near term.

Having said that – the rollout of the bill will certainly have several immediate effects! There definitely will be some immediate winners and losers

Other than these – the price of consumer durables like air conditioners, refrigerators will see a fall which will begin with the logistic and supply chain inventory side, then move on to the overall pricing.

As mentioned earlier, services-related sectors are expected to be the losers. They might have to shell out higher taxes than what they are currently paying.