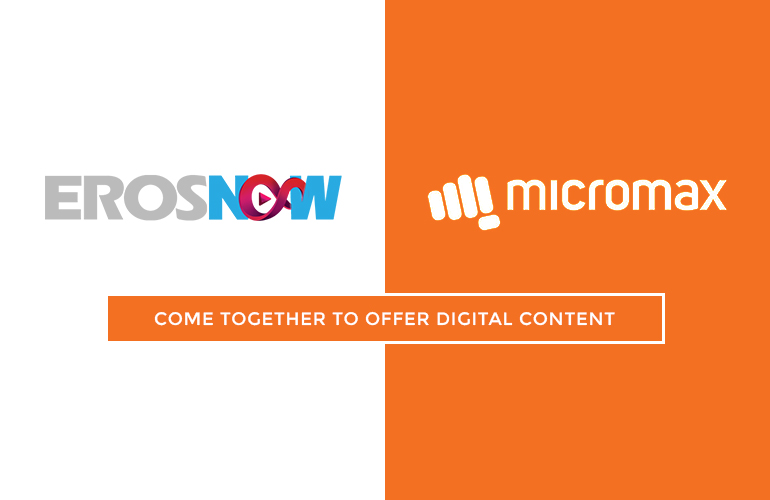 Eros International Plc, a leading company in the Indian film entertainment industry that operates Eros Now, recently announced that it had got into a strategic partnership with its Indian counterpart, and the 2nd largest mobile vendor in India – Micromax Informatics to offer digital content to the consumers.

While, Micromax Informatics Limited is one of the leading mobile phone players in the world is currently the 2nd largest mobile vendor in India with a market share of 14.1 percent, with an offline presence in more than 560 districts through 130,000 retail outlets and online presence through its own e-store and leading e-commerce players in India.

As a part of the deal, Eros Now be attempting to bring endless entertainment to Micromax consumers, by providing them with cutting edge OTT (Over the top) digital content and video-on-demand service, through a preinstalled smartphone app.

For all those who are confused; Over-the-top content (OTT) is the delivery of audio, video, and other media over the Internet without the involvement of a multiple-system operator in the control or distribution of the content. (Source: Wikipedia)

Simply put – OTT is the term used for the delivery of film and TV content via the Internet, by charging a minimal subscription fee. Hotstar, for example!

Micromax smartphone users have the option of choosing their subscription package (₹49/ month or ₹99/ month), duration (that ranges from one month to a year), and get access to unique content that would be offered by Eros Now.

These subscriptions would include a range of exciting features, such as: offline viewing of content, full-length movies, thematic curated playlists, watch-lists, regional language filters, video progression, subtitles, and a lot more. This also includes TV shows from Sony TV, Sab TV and Hum TV for its audience. Plus, the service will also let users in rural areas enjoy content even on low bandwidths too. Additionally, music-lovers also get to enjoy individual music tracks and music video playlists using the app as well.

The growth of fast and reliable internet, and access to affordable big screen devices, has led India to the cusp of a digital revolution. And India being a nation that is simply crazy about TV shows and Movies, this comes as refreshing news for many.

How will this partnership benefit Eros and Micromax?

Beginning with Eros – in the recent times, Eros has been aggressively and strategically partnering with brands in various ways. For instance, in the beginning of this year, Eros Now signed a platform and content deal with Telecom operator Idea Cellular, which would enable Idea 4G customers to purchase subscription at affordable rates and watch movies, originals and short form videos.

Then, just last month itself, they partnered with Amazon.com to offer their video-on-demand (VOD) service Eros Now on Amazon Fire TV, to showcase their arsenal of Bollywood and regional language films, music and originals to Amazon Fire TV users across the US, UK and Western Europe, too.

All this came just after other telecom operators such as Airtel and Reliance had launched their own services Wynk Movies and Reliance Jio, respectively, to offer full suite of Movies, Music, News etc.

Eros Now, at this point boasts of more than 3,000 movies in multiple languages in its catalogue, and is seen to be growing this list, at an exceeding fast rate. And through this deal, they will get to leverage Micromax’s existing millions as well as new Smartphone user base and also their 1.5 Lakh retail outlets in India, where they can channelize their digital content.

Rishika Lulla Singh (CEO – Eros Digital), further adds to this and says, “With this partnership we will be expanding our ability to provide entertainment on-the-go, anywhere and anytime to Micromax’s new acquisition of 3.5 Mn users every month and also their existing base of more than 30 Mn connected users.”

Talking about the benefits of Micromax – after the success of their Canvas series and subsidiary, Yu Televentures, Micromax has also seen to working aggressively towards building its services portfolio to offer convenience and exceptional digital experience to its consumers.

Speaking about the venture, Vikas Jain (Co-founder – Micromax Informatics Limited) said that, “We are extremely excited about this partnership, as it promises to make the digital content from cinema, movies and videos available to our urban and rural customers.” Beyond urban cities in India, Micromax has found mobile internet to be one of the most favored connectivity options in rural cities. This tie up helps us to enhance the experience for our customers beyond hardware specifications. The rich content library of Eros Now promises to become a part of the daily digital consumption of our customers.”

So if you look at the partnership closely; it’s a win-win for both, Eros and Micromax! This partnership simplifies the task of discovering great content anytime, anyplace, and on a device of your choice.

How can OTT (Over the Top) Content, speed up digital India’s success?

This may look a little confusing, but I’ll try to keep it uncomplicated!

Now, to begin with – there are four statistics that we need to look at!

First – at this point, there are about 66 Mn unique connected video viewers and about 1.3 Mn OTT (over the top) paid video subscribers, in India.

Third – to capitalize on this huge market, many of the telecom operators have started offering 3G and 4G services at affordable prices, as well. Basically, faster internet!

And the Fourth – India will also have about 170 million smartphone users by 2016.

So, when you sum it up – low-cost smartphones, along with low tariff rates, faster internet and more Internet usage would in turn, further drastically increase the consumer demand for online content in the coming years.

This has also led to emergence of numerous OTT service providers in the past two years including – broadcasters, portals, start-ups, and video aggregators such as Netflix and Hotstar.

And this is exactly where VOD (Video on demand) or OTT (Over the top) players intend to leverage on the market opportunities.

Keeping these statistics in mind, content owners and aggregators are using non-TV platforms to improve reach and generate revenues through subscription and advertisement, as well.

Such projections also explain why OTT firms in India are betting on this market!

Having said that – even after the increase in traction and the entry of Netflix and domestic players like Hotstar; a single definitive business model in the country’s OTT (over the top) content market still seems to be missing.

By a single definitive business model, we mean – a model which would not charge the consumer to watch the same content on both, the TV and Internet! Charging for Niche Programming, is fine, but what about the rest?

The problem here is that, the development of mobile services is very different from the satellite and pay TV industry.

Of course there is no doubt that – Mobile has great potential as a content distribution platform! But for this to materialize, two fundamentals of: increase of smartphones and strong networks providing internet services covering the entire country, must be met.

However, the bigger question is that – “How do you develop a business model in which you would convince the viewers to pay the content owner again, for the same content you can or have viewed on the TV (that you paid for), on the second screen (the internet)?” Hotstar is a fine example of how a broadcaster can create a second screen.

And it is also not viable for content owners to enter into an arrangement in which they do not make subscription and advertising revenues.

Nevertheless, the solution to all that will find its way, in due course of time!

But speaking overall, the OTT is definitely a great market and will see a rapid growth in the near future.

Plus, the bonus to everything else is that- the unsolved and deeply spread Piracy problem of India will also see a decline!