Changing face of Corporate Social Responsibility, with the changing times! 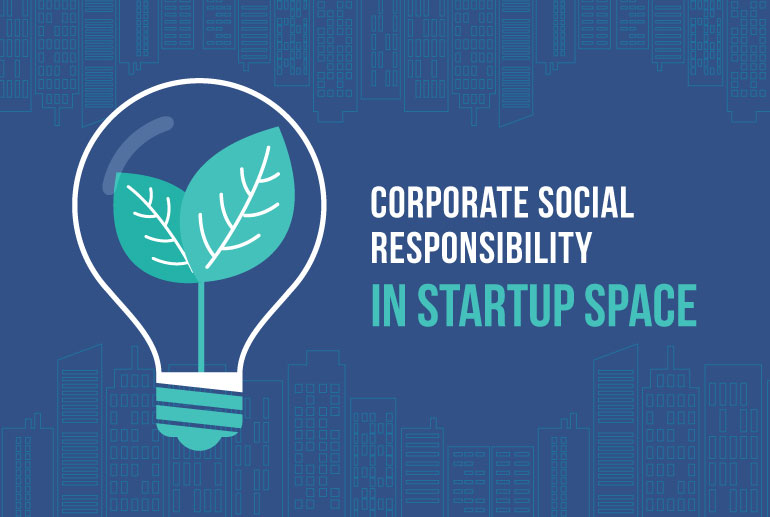 To begin with – for all those who are unaware; Corporate Social Responsibility also known as CSR, simply put is – is every company’s responsibility towards the well-being and growth of the community, society and environment, in all aspects. And they express the same by offering their support in different ways, such as monetarily! Many also term it as philanthropy or volunteering, as well.

Now, since we have observed a drastic rise in the number of start-ups and their earnings, and along with that, it has also given rise to CSR becoming an integral aspect of a start-up’s life and its success.

Believe it or not, Social responsibility has evolved from simple check-writing to becoming a more meaningful process of creating company values, encouraging ingenuity, and providing opportunities for employees to impact society as a whole.

Let’s give you more insights on why CSR now plays a very important role in not just the development and evolution of the Indian society, but also the company as well…!

In April 2014, the government passed a law making CSR activities mandatory for all the corporates.

The Companies Act stated that all the companies that hold a net worth of ₹500 crores or a turnover of ₹1,000 crores or a net profit of ₹5 crores or more in any given financial year, must create and maintain a CSR committee of the board consisting of three or more directors.

There is also a list, officially called Schedule VII, which tells companies what they can do under Corporate Social Responsibility (CSR) as prescribed by the Companies Act, 2013.

Companies that fit the criteria are required to spend on reduction of poverty, improvement of education or sanitation, development of skills or protection of the environment, etc…

With the introduction of this Companies Act 2013, all the companies falling within the bracket or under Section 135 were compulsorily required to be socially responsible, and mandatorily shell out a minimum 2% of their 3-year annual average net profit towards Corporate Social Responsibility (CSR) activities in each fiscal.

The new laws apply to more than 16,000 companies in India, making it a market estimated at more than ₹20,000 crores, and following the changes, there was also a sudden emergence of various CSR outfits that were looking to partner with Corporates in India, to help them achieve their CSR activities.

Basically, the government was now shifting CSR from being an activity-based work, to become a more mandatory, sustainable and long term approach.

Later, the CSR policy of the Companies Act 2013 was further amended by the government in February 2014. This extended and approved the contribution of CSR activities to technology incubators that were approved by the Central government; thus, providing legs to for-profit ventures working with social objectives, as well.

CONTRIBUTIONS MADE BY INDIAN BRANDS

There was a time when CSR activity meant sponsoring health camps or donating used necessities like clothes, computers, etc…

Some of the CSR activities conducted by major IT brands include: –

2. Wipro: – Aside the fact that, Mr. Azim Premji – Chairman, Wipro gave away ₹20,316 crores in the last 2 financial years in philanthropy; the Wipro Group, separately conducts their own CSR activities, mostly in the Learning Enhancement Disaster rehabilitation areas, by providing rehabilitation to survivors of natural calamities and Enhancing learning abilities of children from underprivileged sections.

3. NIIT: – NIIT performs their CSR activities by launching International Women’s Month to uplift Indian women, and also by creating computer literacy and creating awareness about AIDS through their portal I-Learn

4. Satyam Computer Service: – Contributed to the well-being and development of society through various development projects

5. Snapdeal: – Has tied up with Sahara One Media & Entertainment for a film on the Bhopal gas tragedy, and also has a micro-site that acts as a marketplace for charities, as well.

6. PayTM: – PayTM has also partnered with onlineRTI.com, where it will sponsor 1,000 ‘Right To Information’ (RTI) requests, after being reviewed by their marketing and HR team.Additionally, PayTM has also partnerships with a micro-lending platform called Milaap, where customers can opt to give loans to anyone listed on the website.

7. BookMyShow: – Bookmyshow runs something called – BookASmile, which is a two-person team being run by Farzana Cama Balpande, which gives you an option to donate Re 1 per transaction of a movie ticket.

Other than that, Indian tech start-ups also stood up, when the world was hit by natural calamities as well. Take for example the – Nepal Relief! Companies like PayTM, Nurturing Green, Uber, Ola, FoodPanda, Freecharge, etc. extended their support in various ways, such as: –

1. PayTM: – Matched Rupee to Rupee for every donation that went through them and directed it to Prime Minister’s relief Fund

2. Nurturing Green: – Anything that was bought on the 1st May through their website, their entire sales, was donated through PayTM, who then doubled every rupee.

3. Uber: – They also matched Rupee to Rupee for every donation that went through them and also directed it to Prime Minister’s relief Fund

4. Ola: – Connecting all the donations that came to them, to Prime Minister’s Relief Fund

5. Foodpanda: – They too, matched Rupee to Rupee for every donation that went through them, but donated it to Iskon Food Relief Foundation

But with the newly reformed Companies Act 2013, companies would now have to be more organized and planned long-term.

WHY IS IT THE NEED OF THE HOUR ?

Over the period of time, corporates have begun to realise that these CSR activities not only help the society in general, but also helps the organization and its employees directly too!

And with the recent amendments in the CSR policy, which also included investments in Technology Incubators, making it even more evident that CSR activities have their own benefits too.

But sadly, quite opposite to the hopes, the situation looks otherwise!

Off all the options, from eradicating hunger, promoting education, sanitation, etc. that the Schedule VII list (which explained the overall scope of the CSR policy) contained; funding technology incubators, stood last in the first year of implementation, and barely managed to receive any money.

Incubators are institutions that help start-ups survive in their very early stages, stages when most of them are dependent on funding from family and friends.

Incubators are very valuable and a much needed aspect, that is currently required in our society, as they help you with a complete growth package, ranging from grants (anywhere between ₹25 and ₹50 lakhs approx), infrastructure, networking, etc…

Even impact funds (funds that invest in social start-ups) don’t invest in the prototype stage! Hence, our society desperately needs CSR money, which will help to easily scale and build credibility.

There are about 100 incubators associated with academic institutions and most of them are funded by the Department of Science and Technology (DST), the Ministry of Micro, Small and Medium Enterprises (MSME) and the Small Industries Development Bank of India (SIDBI). But only around five of the most prominent incubators have received CSR funding of under ₹2 crores in total.

About 10-12 start-ups are incubated at each of these centres, and they could be involved in developing clean technology, healthcare solutions and creating information technology (IT) innovations.

While, other well-known incubators associated with reputed institutions like IIT Madras, IIM Bangalore and IIM Calcutta haven’t received any CSR funding yet.

And even though, there are corporate offline brands like Mahindra & Mahindra Financial Services Ltd (MMFSL) doing their bit by directly investing in incubators and social start-ups, through their CSR funds. There still remain a large chunk of corporates, who aren’t that keen.

Incubators admit the interest from companies has been unenthusiastic and the reasons for this are many. Let’s point out a few major ones: –

1. Lack of Awareness: – Traditionally this is not CSR, and hence, this concept of funding incubators as CSR is not known to many.

2. Return on Investment: – Since many companies fund start-ups and get returns on that investment, these CSR grants to an incubator which eventually funds money to start-ups, gets them no returns. Ideally, business does not permit mixing something that you do for profit, as charity.

Let’s look at the benefits of CSR activities for a corporate….!

HOW WILL IT HELP THEM IN THEIR MARKETING STRATEGIES AND IN IMPROVING THEIR BRAND VALUE ?

Corporate Social Responsibility is termed by many as the ultimate marketing tool for a company.

And the 4 major reasons for it include: –

1. Helps you connect with customers on a deeper level and develop stronger relationships by incorporating social initiatives within company values.

CSR gives companies the leverage to build trust, reputation and brand awareness through long-term engagement with a section of the population which, regardless of its poverty, has a strong collective voice and real “political” power.

Ravi Venkatesan (Former Chairman of Microsoft India), has also highlighted the real benefits from CSR to companies in his recent book “Conquering the Chaos” using a pyramid model; wherein: –

Basically, companies that focus on the bottom of the chain with their CSR activities, will win the hearts of the Indian community and will creating closer ties and respect amongst them on the longer run.

Take for instance the Chennai Floods –– Companies like Snapdeal, Ola, Zomato and PayTM and a few others, went all out to help the state, and managed to gain the love of the masses, while companies like Coca Cola, Novartis, Microsoft learnt it the hard way!

Coca Cola learnt this lesson when it was accused of wasting and depleting ground water supplies, Novartis when it faced a revolt over the cost of their cancer drug – Glivec, and Microsoft ran into problems over its strategy for tackling software piracy.

All these companies have addressed their problems by introducing new products that fit the India market, implementing pricing slabs for different sections of the society and, importantly, embracing CSR.

Other than that, CSR is actually a great opportunity to gain the trust and attention of the employees.

The Indian IT sector employs a large chunk of youth, which means they have to market the brand well and keep the company’s brand alive internally. CSR gets them the desired social visibility and branding, amongst a generation who sees a career as not just about the money and title, but also about having an employer with better ethics and culture.

According to a Jombay’s India attrition report 2014, which conducted a poll amongst 3000 employees in 60 Indian firms, in the IT industry, the probability of employees staying back is 40% more for employees who take part in CSR than those who do not.

Lastly and additionally, to help such CSR activities, there are also companies like Zero484 Infomedia Private Limited that works with organizations for their CSR initiatives. They offer end-to-end CSR management and implementation program called – ‘Get Closer’, which as a whole, the help corporates in planning, initiation and execution of their CSR activities, Creative team, PR team, CSR reporting, etc..

Thank you for having taken your time to provide us with your valuable information relating to your stay with us.we are sincerely concerned.., Most importantly, you Keepit the major…

Social responsibility is very important for corporate companies. If they support these kind of activity then a lot can be change in the society. This is very essential to help the needy people and to make the country strong with these kind of initiative.