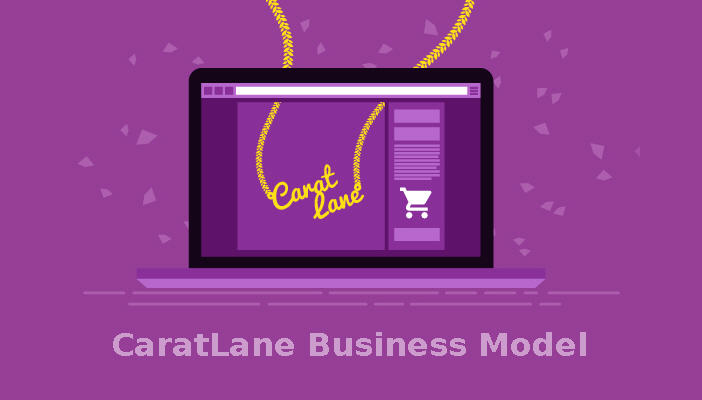 Over the last one decade, the Indian internet market has grown exponentially. One of the sectors that has seen the highest growth is the online retail sector. And it is anticipated to grow furthermore by manifolds in the years to come.

Going further deep in the online retail market, experts believe that jewellery will be the next “in-thing”. And although, the Jewellery industry (on the online front) is still at a very nascent stage, the prospects definitely are bright. This is also because of the growing number of people who shop online.

Having said that, statistics say, about 10% of branded jewellery sales happen online, and to add to that, Jewellery is also said to be the largest selling product on eBay India. Hence, this has led premium jewellery brands to jump onto the e-commerce bandwagon.

Going a few more steps ahead, and to capitalise on this untapped market we have – CaratLane.com!

What Is Caratlane.com And What Is Their Business Model?

Their product range includes a long list of Rings, Earrings, Pendants, Bangles, Chains and Necklaces, etc., of different types, forms and styles, using different materials such as: Gold, Diamond, Platinum, Casual, Formal, Fashionable, etc., and many more depending on the product.

All the Diamonds available on the portal are certified by reputed laboratories such as GIA, HRD and IGI, and additionally, these certifications are further verified by another laboratory to confirm the authenticity of the Diamond and the certificate match as well. On the other end, all their Gold Coins also come with a ‘BIS hallmarking’, which guarantees purity of the product.

The offline jewellery market was famous for not giving the product as shown. Hence, he made sure that every piece produced for CaratLane.com was manufactured exactly as per the given specifications.

To help customers with the right kind of guidance and support, the company has also hired highly experienced diamond consultants.

During the purchase process, a customer can choose the pattern of the solitaire to mount it in the jewellery piece, and the same can be swiftly customised. To add to that, there is also a consultation centre for the customer, wherein they also provide a 3-D model of how the piece would look like.

This allows the customers to virtually get a life-like feel of how it would look like on them. Other than that, keeping in mind the importance that jewellery needs to be tried-on, touched and felt before it is purchased, they have also launched a feature called – Try@Home. When you choose this option, a Try@Home consultant comes to your residence with the jewellery you selected, and many other designs based on your choice.

Talking about their Business Model – while all other Indian online jewellery portals have opted for a B2B (Business to Business) or marketplace model, CaratLane uses a B2C model wherein it acts as a manufacturer and sells directly to the consumers.

But instead of maintaining a conventional inventory, the company has opted for an innovative strategy. They have tied up with a strong network of ‘4000 vendors globally’, who supply products on request.

The company has also partnered with several logistic partners who hold expertise in the high value space, to provide an efficient delivery system. All these products are also packed under camera in a special metal box which is sealed in a tamper-proof packing and is travel-safe.

This allows CaratLane to custom make jewellery and get it shipped to their customers within 10 working days, unlike its competitors who take nothing less than 2 weeks. The shipping of all the products, along with its Insurance is completely free within India.

The company also offers a 30-day-return policy, along with a Lifetime Exchange for all their products, which means that if at any point in life you wish to exchange or upgrade the product, all you need to do is give them a call.

To make it even more comfortable, the company has also launched physical stores across 10 different cities in India including – Bangalore, Delhi/NCR, Hyderabad, Indore, Coimbatore, Chandigarh, Chennai and Thane, as well.

CaratLane was founded by ‘Mithun Sacheti’ and ‘Srinivasa Gopalan’ in 2008.

To give you a short brief about the founders: -

Mithun is a certified Gemologist from the Gemmological Institute of America, California (GIA).

Since he belonged to the family which owned ‘Jaipur Gems’ (a jewellery store headquartered in Mumbai), he was very passionate about jewellery and always wanted to get into the industry. Hence, after he completed his studies, he joined the family business and helped them expand across South India.

While he was at it, he saw the potential of the online retail market, and therefore decided to head towards it. Mithun decided to combine retail jewellery with jewellery technology, and today looks after Business Strategy and Direction at CaratLane.com.

When not playing with diamonds, Mithun spends his time playing badminton and squash, or watches cricket.

He has also been felicitated with the “Next-Gen Entrepreneur of the Year” Award in 2012 by TiE (The Indus Entrepreneur) for his leadership.

Moving on! His vision of selling jewellery on the internet was shared by a man whose expertise turned out to be of a complementing nature in the deal. If Mithun was about Jewellery, then Srinivasa Gopalan was the technology end of the deal.

Srinivasa is an Honours Graduate from the College of Engineering, Guindy, Chennai (CEG) and an MBA from the Indian Institute of Management, Ahmedabad (IIM-A).

His working experience includes ‘Kinetic Engineering’ (Pune) and ‘Satyam Infoway’ (into the Management team), while his business experience is spread beyond the Indian boundaries including countries like – USA, Singapore, Denmark, UK, Australia and the Middle East. He is also the founder of ‘Lister Technologies’.

His knowledge and expertise, is what gave CaratLane.com its technological edge, and while at it, he makes sure that the site pars excellence in usability and robustness to match the glittering products it offers!

When not working, Srinivasa adores travelling to different and unique places across the world.

What Is Their Business & Marketing Strategy?

As CaratLane manufactures its own diamonds, it earns revenue by making sales, similar to an eCommerce model. But as we earlier said, they don’t manufacture it themselves; instead, they outsource it to their vendor partners across the globe.

Due to this model, they are able to have low overheads and inventory costs, and focus more on the operational end, margins and most importantly offer lower prices!

The real trick was to get the pricing factor right!

Similarly, CaratLane has shelved their prices by almost 25% lower than other retailers, which again was possible because they didn’t have to incur the manufacturing and other costs, as compared to brick-and-mortar stores.

And aggregating diamond suppliers in India alone was not enough, and to be able to survive they needed to have an even larger base. Hence, they also tied up with vendors in biggest trading centers around the world including – Hong Kong, Israel, New York, and Antwerp, as well.

Now on the other end, to offer the desired look-and-feel, they utilised the interactive Web 2.0 features. Due to this feature, the customers can customise their jewellery using various designs of rings, pendants or earrings from the website.

Besides that, CaratLane also introduced webpages to educate customers on jewellery purchase, offer comparison, etc., to make informed decisions as well. This in a way was a great booster for them. The more people understood what they were doing, the more purchase they made. Awareness!

And the icing on the cake is that, they have also added diamond consultants to guide the customers, making things even simpler for the users.

What many don’t know is that, apart from the B2C model, CaratLane also caters to the B2B segment through its website which is dedicated to traders, which enables them to sell to retailers to add value to its suppliers as well.

Talking about their Marketing Strategies – the company has opted for a number of digital marketing channels such as Paid and Organic Search, Banners, Email, social media, jewellery enthusiast communities, etc.

They also regularly roll out offers and previews of collections, request users and customers to rate their products, write reviews, etc. This largely helps in building the desired credibility.

A short while back, the company also introduced an innovative ‘Solitaire Experience Lounge’ in Delhi, in attempts to provide its customers a better experience. To explain it in layman, the Lounge gives you the feel and experience of online shopping, but in the retail environment.

To begin with – CaratLane was started with $100,000 and over the period of time the founders spent a total of about $500,000, before they received any funding.

In their initial days, after going through immense struggle, they had started getting 150,000 visitors on an average per day, but used to end up with Zero conversions. It was only months after the hits that they got their first sale of one solitaire.

This is when the grass started turning green for them, they started getting more business and to look more lucrative they also began adding more jewellery. They had understood that, it was the small value products that were getting them more business; hence, they also focused on adding smaller value products as well.

Doing just this, they ended their first year financial year with revenue of $1 million, which greatly jumped to ₹50 crores in 2010 and further (almost) doubled in the next year. Their growth at this point was 300% CAGR.

They were doing about a thousand shipments a month, which was a good number, keeping n mind the ticket size of each sale.

Around 60% of their sales now came from the top 8 cities, they had not only become the first big name in the category in India, but also had increased their revenues to over ₹100 crores annually (2013), which further jumped to ₹140 crores in FY14.

More recently, with a staffing of 300 employees, although the company has been shying away from disclosing their financials for FY15, but it is certain that they have seen a huge increase in the customer base, which has reached to a whooping 300,000. They are also in plans and preparations to increase their revenues to ₹1500 crores by 2019 as well.

Lastly, CaratLane has raised a total of approximately ₹318.31 crores ($58Mn) in four rounds of investments from only one investor – Tiger Global.