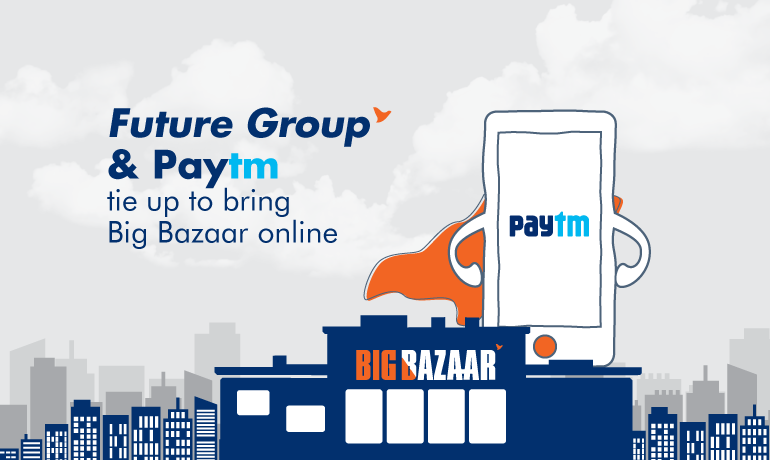 In a recent development made on the 4th of August; Kishore Biyani-led Future Group (that holds a range of retail and fashion outlets such as Big Bazaar, Ezone, EasyDay, Brand Factory, FutureBazaar, etc) is all set to create a mega coalition of offline-online retail: Big Bazaar and PayTM, to extend the reach of their retail store brands.

This strategic tie-up between India’s largest mobile payment and eCommerce platform, and one of the leading retail companies in India, would not only help to offer seamless shopping service to the customers, but would also enable users to shop for Big Bazaar merchandise on PayTM’s marketplace, and get deliveries at their home.

Additionally, users would also be eligible to promotional offers offered by PayTM while using their PayTM Wallet to make purchases at Future Group retail outlets.

Clearly, the future group does not have a great eCommerce strategy, and this partnership would help them in bringing the high frequency, large offline platform, online and get mobile and internet customers to shop for Big Bazaar merchandise. Everything that is available offline will be available on the anchor app.

Future Group has a diverse range of retail outlets and offerings that are spread across the country, and with this deal in place; evidently, Kishore’s Future Group has taken one step forward towards going online, without taking on the overheads of risks and huge costs associated with the eTail business.

Together, the two partners intend to create a mobile first, Omni-channel retail and payment solution for a wide range of consumer base.

This tie-up will further make Big Bazaar the anchor store on PayTM’s marketplace, which would allow PayTM users to make online purchases at Big Bazaar. Their offerings would include all their merchandise from categories such as food, fashion, home, etc. Additionally, customers would also be able to get 15% cash back on all purchases made using PayTM’s wallet, both online and offline.

The deal is exclusive in terms of anchor customer and that PayTM will not have another anchor customer in the same category. An “anchor customer” is basically a market-leading company that partners with a small business to provide that first substantial order!

Having said that – Big Bazaar merchandise will only be made available on PayTM after its Independence Day sales, that’s somewhere around the end of this year.

It would be really interesting to observe how this new partnership evolves and what changes it brings about, to the Indian eCommerce segment!

Believe it or not – It’s already a win-win!

Together, they would not only benefit consumers but also each other. This new coalition of [offline-online] giants is all set to shake-up the retail industry in India! Not only that, but many (or most) would be forced to see the eCommerce portals at the industry from a different angle as well.

Evidently, this tie-up is yet another attempt by Future Group to go online. Some say, they are  late to the eCommerce party, but we believe otherwise. We don’t think they are late!

As a matter of fact, we consider this deal to be a master stroke decision taken by the duo! They just didn’t want to spend enormous amount of capital in the acquisition of customers, and then fulfilment and administrative obligations, and so on, and were in search of the right match to help them in that space.

And because, both the companies would now focus on offering better, cheaper and faster deals to the same customers, rather than spending their individual crores to fight each other and lure retail customers.

Since the last two years, Future Group has seriously been busy understanding the game of eCommerce and how to engage with it.

According to their research (in eCommerce) – the cost of acquiring a customer accounts for roughly 20%, cost of fulfilment accounts for 20%, and cost of running the operations accounts for 8-10%, totalling to more than 50% as just the cost of operation. At this cost, you can’t sell any goods on this medium! That’s where unit economics comes into play.

The unit economics of eCommerce has been the key to understanding the business, more than focusing on the topline! And on an end-to end basis, between Future Group and PayTM, the duo is predicting to attain the lowest unit cost economics in the Industry. This key differentiator of theirs would further help the two, to create sustainable customer value, as well.

The company is further working on to make the unit economics of the coalition, in a manner that’s beneficial to the customers.

As it is believed that in any business, unit economics ultimately plays a crucial role for the survival of any player; hence, keeping in mind –– PayTM’s cost of acquiring the customer being the lowest and Big Bazaar being there to manage the distribution /cost of fulfilment at the lowest, this partnership will turn out to be the leader in the space in no time!

Additionally, strong experience in large-scale customer acquisition and seamless payments through Digital Wallets would also turn out to become key ingredients in driving this partnership.

This means that a customer can walk into a Big Bazaar outlet or any other Future Group store and make payments using the PayTM wallet, and furthermore, customers of Big Bazaar can also take advantage of promotional offers on all purchases made online and / or offline, using the platform’s wallet facility as well.

Other than these – the tie-up with PayTM comes just a few days ahead of Big Bazar’s yearly flagship sale, “Maha Bachat” that contributes around 3% to their annual revenue, will be running from 13th to 16th of August this year. Big Bazaar is targeting ₹1000 crore in sales from the sale and a new set of customers outside of their loyal userbase, which will be encouraged furthermore by the online partnership.

Other partnerships of Future Group and PayTM…!

To begin with — as much revolutionary this partnership is; but this isn’t the first time that Future Group has decided to tie-up an eCommerce portal or launched a new scheme to use digital medium to sell their products!

Future Group has tried its hand at several places before landing upon this deal! Earlier in 2014, Future Group began their online journey by inking a deal with Amazon to sell their products on Amazon, and later this year in April, also made their first acquisition internet of the online furniture store, FabFurnish.com.

Before Flipkart snapped away Jabong, Future Group along with Abof and Snapdeal had also tried to bid their way to acquisition, but failed.

More recently, according to several sources, Future Group is already in talks with Snapdeal in making a similar deal of online retailing of products and brands being offered by the Group.

These talks are at a very advanced stage with Snapdeal.com, and the deal should get concluded very soon as well.

Having said that – although, there isn’t any official statement about this recent development, but what is certain, is that Future Group will be selling on Snapdeal on the Maha Bachat Day.

On the other end, in February, in attempts to widen their online-offline reach, PayTM initiated several partnerships: -