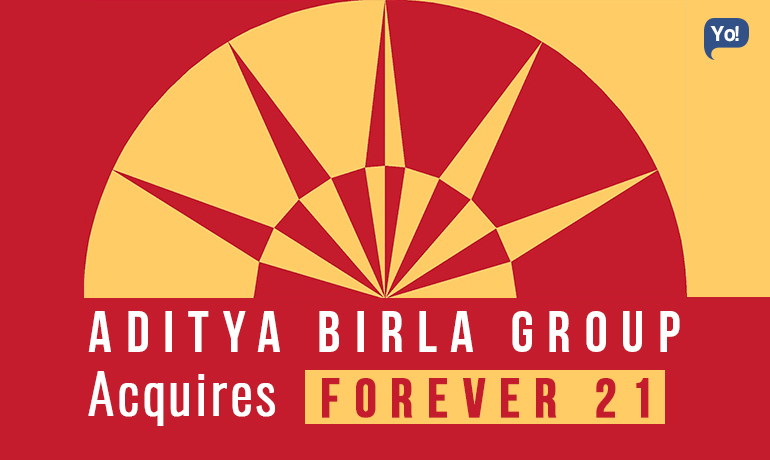 So the latest news is that “Aditya Birla Fashion and Retail” or as they like to call themselves – ABFRL, has acquired the global clothing brand “Forever 21” in the Indian market for $26 Mn (that is ₹175.52 crores approx).

They have executed a business transfer (not share transfer) agreement with “Diana Retail” and “DLF Brands” for the acquisition of the business undertaking of Diana Retail with effect from July 1st of 2016. Diana Retail is the franchisee of Forever 21 brand in India.

As per the BSE filing by ABFRL, the transfer includes the acquisition of, all of Forever 21 brand including their eCommerce channel that operates in the Indian market, which will now become a part of ABFRL’s Madura Fashion & Lifestyle division.

The news that was first announced by ABFRL in May this year, finally saw the daylight when the Board of Directors of ABFRL in-principally approved the proposal to enter into a binding Memorandum of Understanding [MoU] with Forever 21. This MoU states in detail, the acquisition of the exclusive online and offline rights of the global brand – Forever 21 for the Indian market along with their existing store network in India from their current franchisee i.e. Diana Retail Private Limited.

Although, the details of the deal have not been disclosed, but keeping in mind the longer vision that both the companies hold, it is being assumed that they have signed a long-term partnership together that probably spans to more than a decade.

Interestingly, Flipkart-owned online fashion store Myntra was also in talks to buy the rights of Forever 21, as well. They were in advanced talks to manage the local business of the US fashion retail chain.

Myntra, since a while was looking at ways to make an entry into offline retailing and was also exploring the possibilities of opening its branded offline stores, and with such moves, the eCommerce firm was trying to de-risk their business from being online-only focus brand. And Forever 21 opportunity would have helped them gain the desired momentum.

In fact, handshakes had also happened between the two parties and the documentation was also happening.

But then ABFRL came and stole the show, and acquired the rights for global fashion chain Forever 21 in the country from DLF Brands.

What factors led to the acquisition of Forever 21?

Founded in 1984, Forever 21 Inc is the 5th largest speciality fashion retailer of women’s, men’s and kids clothing and accessories, based in Los Angeles (California). It is most known for offering the hottest and latest fashion trends at a great value to consumers.

Forever 21 had entered the India market through the franchise route in 2011. It had partnered with Dubai-based “Sharaf Retail“, but since the business failed to scale up in the next two years; the Dubai company was asked to close down the lone store in New Delhi in early 2013.

Post that, Forever 21 cancelled their franchise agreement with them, formed a joint venture with DLF Brands and opened ten stores — in the National Capital Region (NCR), Mumbai, Pune, Bangalore, Thane and Hyderabad.

Even after working along with its Indian counterpart DLF for around three years, the apparel company Forever 21 that then had 12 stores across Mumbai, Delhi and Bangalore, had been dissatisfied with the pace at which they were growing.

Initially, the JV between Forever 21 and DLF brands was being noted as a pitch perfect partnership, and Forever 21 was to occupy a space at a competitive rent in DLF owned malls.

The company had originally planned for 50 stores in five years; in addition to Chandigarh, where it already had a presence, the US firm also wanted to expand to other Tier II cities such as Coimbatore and Surat, as well.

But over the period of time, Forever 21 realised that DLF’s malls were not always the most lucrative shopping destinations for the consumers.

Even after being amongst the top three or four brands in the fast fashion space, being one of the best performing international brand in India and even after maintaining its run rate or average trading density (which was much higher than the industry majors) despite competition from newer entrants like Zara, H&M and Gap; Forever 21 still highly lacked the needed partner, to reach where it aimed to!

They wanted an aggressive play in the country to compete with brands like H&M and Gap, who were aggressively multiplying their store presence. They clearly weren’t getting that from DLF, which meant DLF had to go!

And consequently Forever 21 opted to team up with ABFRL!

Post the consolidation, PFRL was renamed to Aditya Birla Fashion and Retail (ABFRL), with over 7,000 points of sale in over 375 cities and towns.

Unlike DLF brands, ABFRL is known to be one of the largest apparel players in the country, with apparel as their core category for the company, and also has manufacturing units that could become sourcing hubs for Forever 21 as well.

Forever 21 was a brand that many women had fallen in – and out of – love with. They were the perfect fit for the young, cash-strapped customers who wanted to get their hands on stylish clothing.

Ultimately, the name “Forever 21″ says it all!

To a young woman who can’t legally drink yet, turning 21 is the dream. This cheap, short-lived fashion doesn’t bother this consumer.

And Forever 21 targets exactly that girl, who is not yet interested in purchasing quality clothes; but instead, just wants to look good. And when that girl moves on, another crop of girls entering that age group, enter Forever 21’s target audience.

Additionally, on the business end, as per a recent poll conducted by Goldman Sachs and Teen Vogue amongst its fashion influencers between the ages 13 and 29, it was noticed that, these age segment of girls not only like Forever 21 – they love it!

Beating other –fast-fashion majors like Urban Outfitters and H&M; Forever 21 came in at number 8 on the list of brands that matter to fashion-forward “It Girls”, and also topped the ‘Love List’ as well.

Keeping all these factors in mind, Forever 21 would have been the perfect fit for ABFRL to maintain its dominance in the fast fashion space. Along with that, this partnership would also help them in expanding their market in the foreign territory by using Forever 21’s expertise and connects!

The acquisition by ABFRL is being noted as a strategic intent to position themselves as the largest integrated branded fashion player in the country, more specifically in the women’s wear segment, which is currently growing at more than 20%.

While on the other end, since Forever 21 has built a very strong franchise in India in the last few years and has already become a brand of choice for fashion focused women; it aims to become one of the largest women’s wear brands in the country too.

And the emergence of the young demographics of the country along with fast fashion segment, offers them the perfectly blended opportunity for rapid growth for the brand as well.

Hence, for a brand like Forever 21, that is focused on teen fashion at moderate prices (₹800 -₹7000) and an aggressive expansion agenda, ABFRL is more than strategic and perfect fit.

And, thus the partnership of Forever 21 and ABFRL is a clear win-win!