AddoDoc : A One-Stop Solution For All Your Healthcare Related Issues! 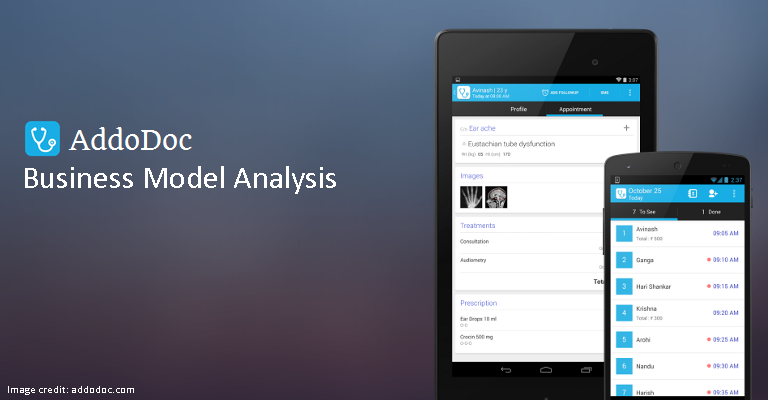 Reaching out to doctors for advice or check up has always been an issue for the many. Even if it is a minor issue, we have to go through the whole process of booking an appointment and then visit them physically, and then, there are times when the doctors aren’t comfortable sharing their personal phone numbers with every patient as well.

This often puts parents in a fix, especially when, all they need is advice and guidance on what to do next. However, most of the time, the doctor may not be reachable over the phone.

This is where AddoDoc comes into picture!

What is AddoDoc? How does it work?

Founded in 2014 and based in Delhi; AddoDoc is Clinic Management Application for Paediatricians. It is a one stop pediatric healthcare platform that helps parents to connect with their pediatricians for all their healthcare needs.

As the founders put it – “the name AddoDoc, is a made up word where ‘Addo’ stands for ‘Inspire’ in Latin and ‘Doc’ is short for Doctor. According to them, AddoDoc means to inspire doctors to take the patient care to the next level, and with this product the founders aim to revolutionize the digital healthcare and doctor-parent communication space in India.

For Pediatricians, AddoDoc turns out to be one of the easiest practice management solution, wherein a Doctor in India are successfully able to achieve maintain the patient’s health records, follow them up and care for them, with minimal effort and in the given time span of less than 5 minutes per patient.

And on the other end, AddoDoc Care turns out to be a parent’s companion in child care as well, wherein, it ensures a parent to keep a track of their child’s health, helps them to digitally record vaccine schedule, growth charts and medical records, and also helps them to virtually reach out to the expert doctors for consultation and help via tele-consultation, even at odd hours.

Their product is mainly divided into two major kinds of Apps: – one for the Doctors and the other one for the Parents.

This app for the doctors acts as a Clinic Management Application or as an assistant to them. Some of its features and benefits include: -

AddoDoc Care acts as an all-round companion for child care for parents and helps them in various ways. Some of its features and benefits include: -

BabyGogo is a blog conceptualized and made by AddoDoc itself, which attempts to provide all vital information about baby care. What they do is, they bring in all the experts, parents, service providers on one common platform to enable the exchange of information.

Whether you are expecting a baby or, are already a parent of a 3 year old, their intention with the blog is to leverage the parents with access to right information, tools and experts at right time.

Their portal is enabled with a recommendation engine that understands your real-time need and accordingly provides you with the right tips at right time.

AddoDoc is founded by three geeks Siddhartha, Sowrabh and Satyadeep who are alumni’s of IIT Guwahati and IIT Gwalior.

Siddhartha presently works as the CEO of AddoDoc.

He began his career as an Intern with the Indian Institute of Management (Ahmedabad) in May 2008. For the next 8 months with them, he was a part of a project called – “Multi Mode Multiple Resource Constrained Project Scheduling Problem”.

Post this stint, he joined Videonetics Technology in Kolkata in May 2010, again as an Intern for about 3 months. There he was made to work on a project named – “Real time implementation of Face Recognition System for large database”

This was followed by his first job as a Subject Matter Expert at Amdocs in June 2011, just after his education. For the next 11 months, he worked there as a Software Developer with the team that manages Ordering Management System (OMS) in BSS group in Amdocs.

That is when the entrepreneurial bug bit him, and he left his job to work on AddoDoc in April 2012 and launched it in the end of 2013.

Satyadeep presently works as the Chief Technical Officer of AddoDoc.

He has completed his Bachelor of Technology in Computer Science and Engineering from the Indian Institute of Technology (Guwahati) in 2012.

Just like his partner, he too started his career as an Intern, but with Sarada Research Labs, in May 2010. During this 3 months stint, he got the opportunity to design and implement an interactive tool for analyzing changes across different versions of hierarchical web database-centric applications using Oracle application express.

Post that, he went on to develop and integrate a graph based editor in Java, for the automation of large scale gas networks on a generic framework for multi-agent systems simulations. He developed this while doing his 3-month Internship with University of Duisburg-Essen in 2011 in Germany.

In 2012, he joined Oracle as the Member of Technical Staff, and was a part of Software development process in the back-end team of Oracle Service Oriented Architecture which also involved server side development in Java and J2EE technologies, as well.

This stint continued for around 3 years, post which, he decided to take the leap, and joined his friends, to start his first entrepreneurial venture!

Sowrabh is the third Cofounder of the AddoDoc management team.

He too, has completed his Bachelor of Technology in Computer Science and Engineering from the Indian Institute of Technology (Guwahati) in 2012.

He started his career in May 2010, by Interning for 3 months with Brightex Bio Photonics and worked in on optimization of image processing algorithms using NVidia’s CUDA architecture.

After that, he moved to Microsoft on a 3-month Internship Programme and worked on the development Investigations for Office Mobile on Windows Phone-Apollo.

Later, he then moved on formally join Microsoft as a Software Development Engineer in July 2012 and stuck around for more than 3 years.

Finally, he then decided to take the leap and joined the cofounding team of AddoDoc to create the magic.

What is their story? How has their Growth been so far?

So their story of how they united to cofound AddoDoc is pretty interesting!

It all goes back to their IIT days. During their second year, Satyadeep and Sowrabh had created a Dropbox Plugin for syncing folders.

Since folders had to be physically moved into the Dropbox folder earlier, this solution of theirs solved a major limitation in Dropbox, and turned out to be a massive success with more than 500,000 downloads. And of course, tremendous media publicity from The Hindu, Lifehacker, MakeUseOf, PC World, and Fast Company too! This is when the entrepreneurial bug first bit them.

Over the years, the urge to become an entrepreneur kept multiplying. This is when the AddoDoc opportunity arrived!

Satyadeep was going to attend a start-up event in Bangalore, but unfortunately his tyre got punctured and was forced to call for help. He called his best buddy, Sowrabh, and asked him to take him to the event. As they entered the venue, they saw Siddhartha presenting his product idea on the stage.

Goes without saying – both Satyadeep and Sowrabh loved Siddhartha’s idea, and after speaking to him, got onboard as co-founders of the start-up.

Further research showed them that, there are only 80,000 pediatricians in India and since, delivery of healthcare is a huge challenge, there is an insufficient growth monitoring of a child.

This has resulted in problems like thyroid, hormonal, and malnutrition in children. As a matter of fact, 44% of children under the age of five in India are underweight, and most of the trivial health issues in children can be resolved easily if parents or caretakers, if they have access to the right information and a doctor at the right time.

AddoDoc has been designed as completely mobile-based simply because, their users are mainly assistants/receptionists at a clinic or hospital, who are less computer savvy and more messaging savvy due to WhatsApp.

In Jan 2015 – AddoDoc was selected to be a part of the much awaited Delhi Edition of Pulse42’s StartupPulse, which is a one-on-one mentoring event where start-ups get mentored by industry veterans for a day and selected 5 start-ups will get the opportunity to present their pitch at the Pulse42 party. Pulse42 is the most hunted tech party for start-ups to get into the books of the ecosystem’s renowned names.

Post that, they were also selected from over 350 applications for the first batch of ten start-ups of BW Accelerate, an acceleration programme launched by the Business World in June 2015. This was a multi-city program and was aimed to create an innovation-driven ecosystem in the country.

The focus of this 3-month mentorship programme was to groom the start-ups on product development and insights, go-to-market strategy, customer acquisition, business expansion, networking, strategic marketing and fund raising.

In their recent developments and growth – with a small team of 6 members including the founders, AddoDoc is presently helping more than 50 doctors in NCR (National Capital Region) and connecting them with their 80,000+ patients, and has already crossed managing of more than 100,000 appointments.

So far, they haven’t raised any external funds as well, but we sure can expect some big news on this, in the near future.